The adviser, confirming a report in Politico, said lawyers for Trump had sent cease-and-desist letters to the Republican National Committee, National Republican Congressional Campaign and National Republican Senate Campaign, asking them to stop using his name and likeness on fundraising emails and merchandise. 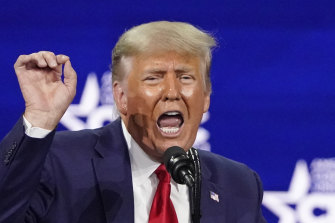 The adviser said Trump is sensitive to the use of his name and likeness for branding purposes and was irked that the three groups have supported Republican lawmakers who joined Democrats in voting to impeach him over the January 6 storming of the US Capitol by pro-Trump protesters.

Trump is using his Save America SuperPAC to raise money in part to help hand-picked Republican candidates in the 2022 congressional elections. Some of them are expected to challenge Republican incumbents.

A civil war has erupted within the Republican Party, with establishment figures such as Senate minority leader Mitch McConnell eager to put Trump in the rearview mirror, and others, like Trump ally Senator Lindsey Graham, believing the party’s future depends on the energy of the pro-Trump base.

Trump has waged a war of words with establishment Republicans, some of whom he feels betrayed him by joining Democrats in impeaching him.

Trump, now living at his Mar-a-Lago club in Palm Beach, Florida, dangled the possibility of running for president again in 2024 when he addressed a conference of conservatives last Sunday.

In that speech, he singled out Republicans Senators Mitt Romney and Pat Toomey and House lawmakers Liz Cheney and Adam Kinzinger, suggesting he would support candidates who opposed them in Republican primaries. Still, Trump has committed to helping Republicans try to win control of the US House of Representatives and the Senate in 2022 congressional elections that will be a first referendum on the leadership of Democratic President Joe Biden.

Poetry Taught Me How To Write About My Mexican Heritage, After Years Of Pushing It Aside