President Trump swore Thursday morning that he doesn’t watch much television, as he phoned into his favorite morning show Fox & Friends.

‘I don’t watch things now. I can put it out of my mind and I never, ever thought that that would be possible,’ Trump claimed. ‘And you know what that does? It keeps you – you keep your sanity and it works very well.’

Trump then immediately mentioned how he had watched CNN’s town hall Wednesday night featuring former FBI Director James Comey, one of the president’s favorite people to lash out about. 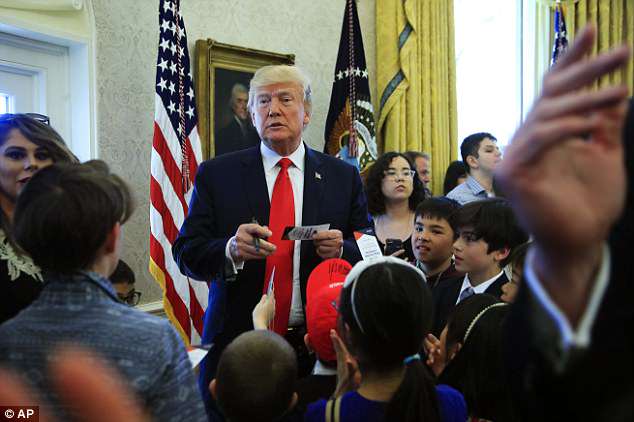 President Trump told the hosts of Fox & Friends that he doesn’t watch much television anymore to keep his ‘sanity,’ then pivoted to talk about what he had watched on television the night before 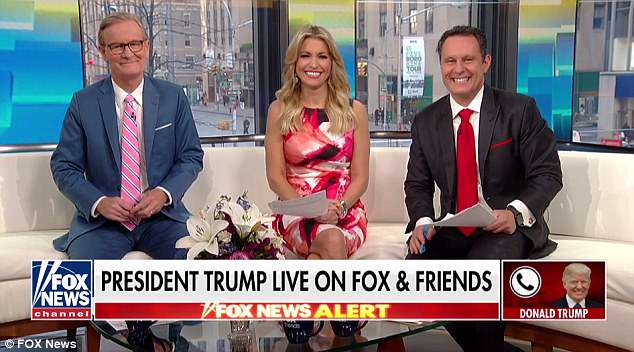 ‘But last night I did watch – I did watch a liar-leaker and his performance, by the way, was horrible,’ Trump said.

‘And I will say this, Anderson Cooper was surprisingly tough and he did a good job,’ the president added, referencing the CNN anchor who moderated the Comey town hall.

Fox & Friends co-host Steve Doocy chimed in, ‘He did.’

Before Trump swore he watched less TV, he had torn into Meet the Press host Chuck Todd, again using his nickname for the newsman ‘sleepy eyes’ over suggesting the president had given too much to North Korea in advance of his planned meeting with the regime’s leader Kim Jong Un.

‘So I have this guy, fake news – he’s on television saying “Why am I giving up something?” I never gave up anything,’ Trump said. ‘The people have to understand how dishonest the news is.’

‘And, in all fairness to Fox, you guys don’t always treat me great, but you treat me fairly. You know, it’s not like Fox is perfect for me. They’re not – they’re tough, but at least it’s fair,’ Trump articulated to the three Fox & Friends hosts.

Trump said he no longer watched NBC calling them ‘as bad’ as CNN.

‘And by the way, I made them a fortune with The Apprentice,’ Trump said. ‘You would think that these guys would treat me great. So they treat me horribly and they treat me falsely.’

Trump said that on CNN ‘they’ll have a council of seven people and of the seven people every one of them is against me.’

‘I’m saying, where do we – where do they even find these people?’ Trump said.

Jumping in, host Brian Kilmeade told the president, ‘I’m not your doctor, but I would recommend you watch less of them.’

Trump protested that he didn’t ‘watch them at all.’

‘I watched last night,’ he then added. ‘I’ll tell you what. I watched leaking, lying Comey last night and … hated to do it.’

Government accused of making fracking as easy as building a wall