US President Donald Trump is not giving up on the idea that Alabama faced a serious threat from Hurricane Dorian. 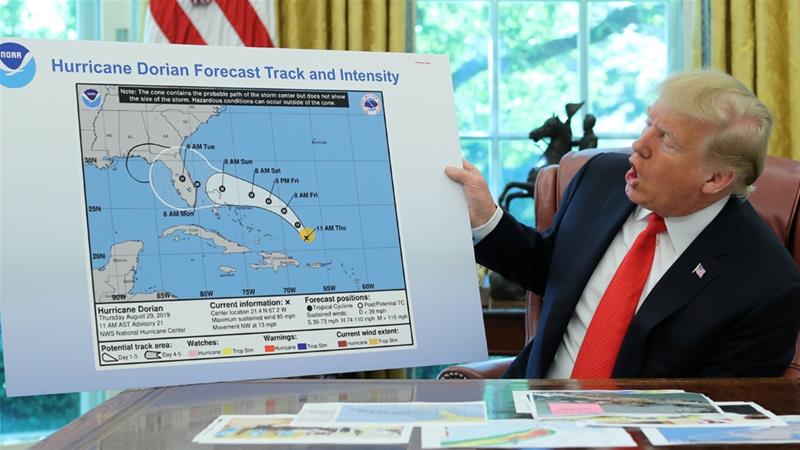 US President Donald Trump has shown a map of Hurricane Dorian’s trajectory that appeared to include a hand-drawn half-circle that extended the cone of uncertainty over a swath of Alabama.

Trump claimed on Wednesday that the map was the original forecast, but a similar map shown by the White House last week did not include any impact on Alabama.

Trump surprised many, and especially the National Weather Service on Sunday when he tweeted that Alabama, along with the Carolinas and Georgia, “will most likely be hit [much] harder than anticipated.”

After the tweet was published the National Weather Service quickly responded:

Alabama will NOT see any impacts from #Dorian. We repeat, no impacts from Hurricane #Dorian will be felt across Alabama. The system will remain too far east. #alwx

The next day, Trump pushed back on sceptics by insisting that “under certain original scenarios it was, in fact, correct that Alabama could have received some hurt.”

On Wednesday, he remained insistent.

“Actually, we have a better map than that which is going to be presented, where we had many lines going directly – many models, each line being a model – and they were going directly through. And in all cases, Alabama was hit if not lightly, in some cases pretty hard … They actually gave that a 95 percent chance probability,” he said.

The highest probability issued for a United States locale for Dorian has been in the 60 percent range, not 95 percent.

The president did not clarify where he got that information, which directly contradicts the reports from the National Weather Service and the Federal Management Agency.

Trump later tweeted a map dated August 28, claiming: “As you can see, almost all models predicted it to go through Florida also hitting Georgia and Alabama. I accept the Fake News apologies!”

This was the originally projected path of the Hurricane in its early stages. As you can see, almost all models predicted it to go through Florida also hitting Georgia and Alabama. I accept the Fake News apologies! pic.twitter.com/0uCT0Qvyo6

“He has no clue what he’s talking about, or what is plotted on that map. At the time of that cycle, Alabama was at even lower risk than before, and it was barely anything to start with,” Brian McNoldy, a hurricane researcher at the University of Miami, told the Associated Press news agency.

Earlier this week Hurricane Dorian struck the Bahamas, leaving 70,000 people in need of immediate humanitarian relief, according to the United Nations.

The most damaging storm to hit the island nation, Dorian killed 20 people when it hit as a highest-level Category 5 storm, Bahamas Prime Minister Hubert Minnis said.

In the US, South Carolina was preparing for a record storm surge, potentially reaching a height of two metres at the popular vacation destination of Myrtle Beach, the US National Hurricane Center (NHC) said.

South Carolina is also likely to suffer major flooding with the potential for over a foot of rain in places when Dorian hits the coast on Thursday or Friday, the centre said.

Coronavirus battle plan: How you could be hit by the outbreak

Big Brother 20 spoilers: Who won the Power of Veto during week 8?