Gabes, Tunisia: A commission that has been working for four years to deliver justice to victims of Tunisia's decades-long dictatorship has brought one case to court, which began last week with a single hearing.

And the commission's four-year mandate expired on May 31, although the government granted it an extension until the end of the year to wrap up its work. 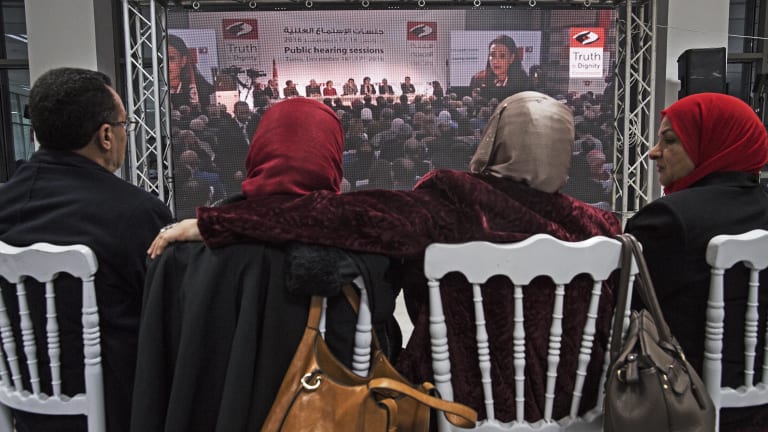 Hamida Ajengui, centre left, a former Islamist activist tortured under Zine al-Abidine Ben Ali’s dictatorship, listens to other victims at the Truth and Dignity Commission in 2016.

Parliament had the option in March to prolong the Truth and Dignity Commission's mandate for another year, but voted against it. The commission's president, Sihem Bensedrine, said in a recent interview that this was the latest in a series of obstacles that officials at the highest levels of government have thrown in the path of her panel's work.

"This vote was a last attempt for those who fear accountability, especially the president of the republic and his entourage, who have never supported the process of transitional justice," she said.

Tunisia, where the wave of Arab Spring uprisings began in late 2010, has been held up as the most successful in the string of revolutions that followed. It ended nearly 60 years of dictatorship and brought a modicum of democracy and greater individual freedoms.

The mandate of the truth commission was also a first in the Arab world for its scope and ambition. It stemmed from a transitional justice law passed in 2013 and the following year, the commission began its work.

Tunisia looked to Kenya and Latin America for models of transitional justice systems and there was hope that it, in turn, could serve as an inspiration for other Arab nations that have been in upheaval since 2011. 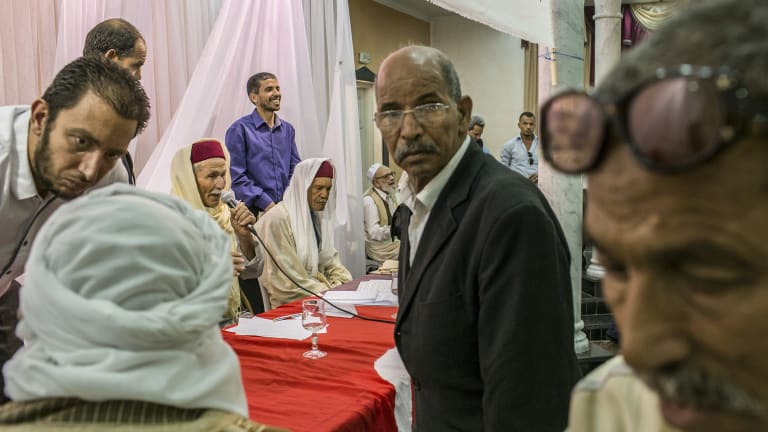 Members of Tunisia’s Truth and Dignity Commission meet with victims in Kebili, Tunisia, in 2015.

The commission had several missions. One was to mediate between the victims and the perpetrators to try to promote national reconciliation outside of the judicial system. Families could confront the accused, seeking public apologies and a commitment to reveal the truth.

In the case of more serious crimes, the commission was asked to uncover and record past injustices and refer those responsible for prosecution to a network of special courts. The commission received more than 62,700 complaints to investigate, and of those, some 23,000 victims were willing to go to mediation rather than the courts.

Last week, the special court in the southern Tunisian town of Gabes held the first hearing in its first case, which dates back nearly 30 years. It was groundbreaking, according to some of those present, because it was the first time witnesses – including police – openly detailed systematic torture and violence under the past dictatorships.

For Bensedrine and many families who suffered under decades of dictatorship, the hearing offered a glimmer of hope that justice would be served.

"The vote at the parliament was clearly a move to stop us," Bensedrine said, days before the first trial opened. The vote against extending the commission's mandate came just days after she referred that case to the court.

The decision was one of numerous hurdles placed in the commission's way. The most serious of them was a new reconciliation law passed in September 2017 that, according to its opponents, bypassed and undermined the transitional justice process.

Tunisian President Beji Caid Essebsi, who served in prominent positions under both of Tunisia's former dictators, supported a government-controlled reconciliation process rather than the independent commission, and he proposed the law. 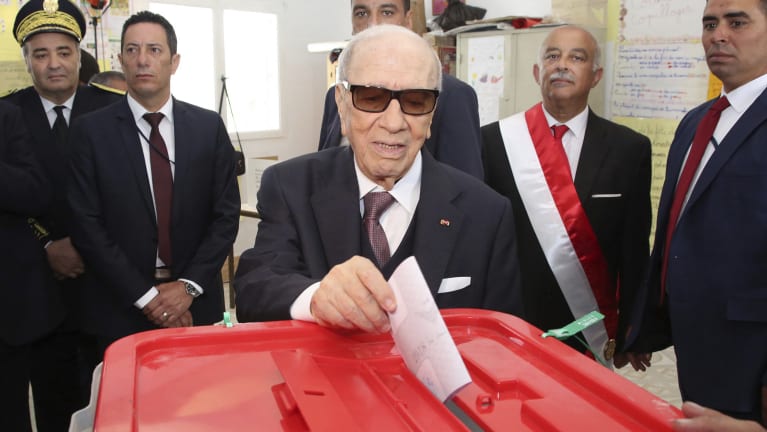 The law also held that former civil servants who had not been directly involved in political crimes or corruption could not be held responsible for their actions under the dictatorship.

Members of the Truth and Dignity Commission said this contradicted their mission, which was to hold the accused accountable before the Tunisian public. The reconciliation law does not oblige them to make public apologies or even to publicly reveal their crimes.

"A lot of the accused stopped coming to the Truth and Dignity Commission after the law passed," said Oula Ben Nejma, the head of investigation for the commission. "They saw an opportunity to get an easy pass."

Commission officials said another way the government obstructed their work was to block full access to the archives of some government ministries, which hold potential evidence of past crimes.

The Tunisian minister for human rights and civil society, Mehdi Ben Gharbia, insisted that the government still supported the Truth and Dignity Commission, citing the granting of a handover period as a sign of that.

"Despite the political tensions, we all support transitional justice now," he said in a telephone interview. "We all want to ensure that the process goes on even after the Truth and Dignity Commission finishes its work."

The case that began last week dates back to 1991, when a young man named Kamel Matmati was taken by the police, tortured, and then died in detention, according to witness testimony. He was 21.

His mother had to wait 25 years for a death certificate, and she has never received his body. 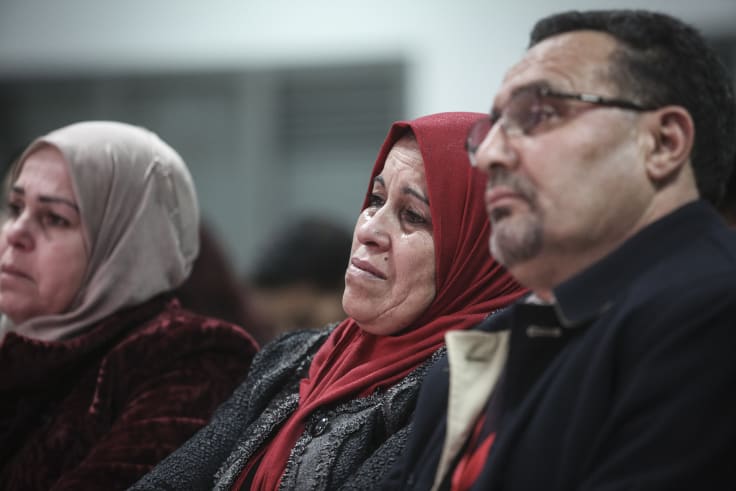 Hamida Ajengui, centre, listens to testimony of torture victims at a commission hearing.

Fourteen people – including former dictator Zine al-Abidine Ben Ali, a former interior minister, Abdallah Kallel, and several police chiefs – were charged with his forced disappearance, torture and killing. None of them turned up in court.

Raoudha Karafi, president of the Association of Tunisian Magistrates, expressed surprise that none of the defendants had turned up for the first day of the trial.

"Apparently only one of them was summoned by the court. The others did not receive the summons," she said in an interview after the hearing.

"It is really unfortunate, because this trial is historic. It stands as a real opportunity for justice in Tunisia and for the accused not to come, it means that they don't respect the justice process and they still live in impunity," she added.

Even without the defendants present, last week's hearing was seen as a victory for those who have supported the work of the transitional justice commission.

"I really hope to discover the truth," Fatma Bouanaya Matmati, the mother of the victim, told one of the five judges hearing the case, "and to be able to give a proper funeral to my son. He was my only son."

Last week's trial launched the first of more than a dozen expected at the special courts. In apparent frustration as it neared the end of its mandate, the commission rushed to issue 16 indictments since March and more are expected.

Each indictment can have multiple victims or suspects and the commission said that the 16 submitted covered the cases of 245 victims.

Matmati's is one of 194 cases registered by the commission of people who were forcibly disappeared during the dictatorships of Habib Bourguiba, the first president of Tunisia, and his successor Ben Ali. Part of the mission of the special court is to question the accused, some of whom spoke in closed hearings with the truth commission but who refused the reconciliation process. 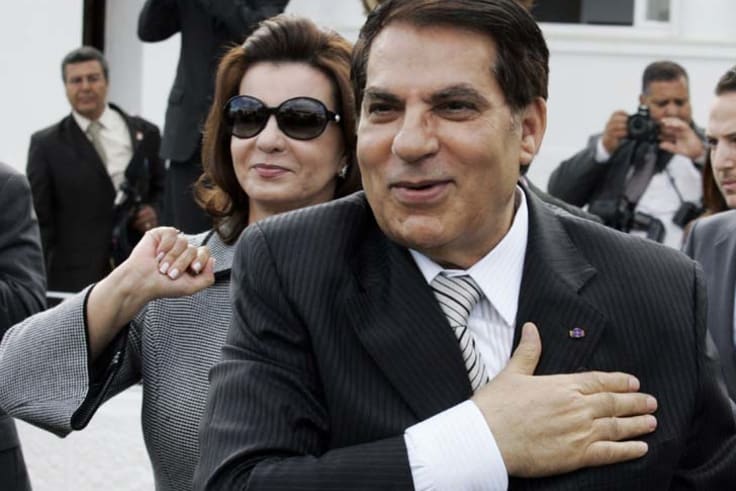 The special court can pass sentence even in torture cases that would usually be past the statute of limitations, such as that of Matmati. It also has mechanisms to compel defendants to appear, although it does not yet appear to have used them.

The testimony at the hearing broke new ground, according to some of those present in the court.

"I wrote down every word of their testimony," said Samir Dilou, a member of the Islamist party al-Nahda, himself a former political prisoner and now a lawyer for Matmati's family, "because I have seen so many trials about torture but never heard such admissions."

"They would let us hang from a window head down or make us sit on bottles," he said. "They would even beat us without asking any questions."

Another cellmate and a key witness, Ali Amri, a doctor, said he had verified Matmati's death for his persecutors after they had beaten him to death. The truth commission's investigation confirmed that Matmati's body had been transported to a police hospital in Tunis.

No one could say what had happened after that.

MSNBC's Joe Scarborough: 'The President Has Abandoned Us' (Video)