Two elephants escaped from a circus as one wandered through the snowy streets in a Russian city before handlers battled to get her under control.

Elephants Karla and Ranni were reportedly with the Togni family, one of the largest Italian circus dynasties, in Yekaterinburg, Russia.

While Ranni loitered near the Italian circus truck as they headed for the next destination, Karla strayed from the group and headed for a tour of the city. 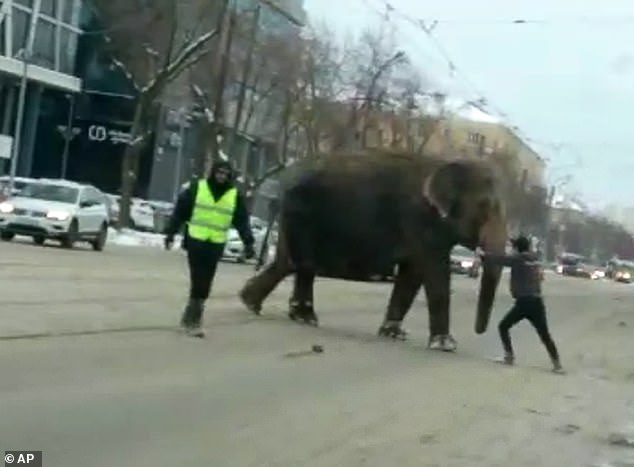 Karla was spotted wandering through Yekaterinburg, on January 23. She was performing at a local circus and strayed from the group which were heading on to their next destination. Here she is guided across a road (pictured)

Footage shows Karla being guided across the road by a handler holding on to their trunk, while another person stands nearby and keeps a watchful eye.

The elephant crossed the road and headed to a residential building to roll and cavort in the snow.

Handlers gathered around the animal and used ropes to try and restrain it. 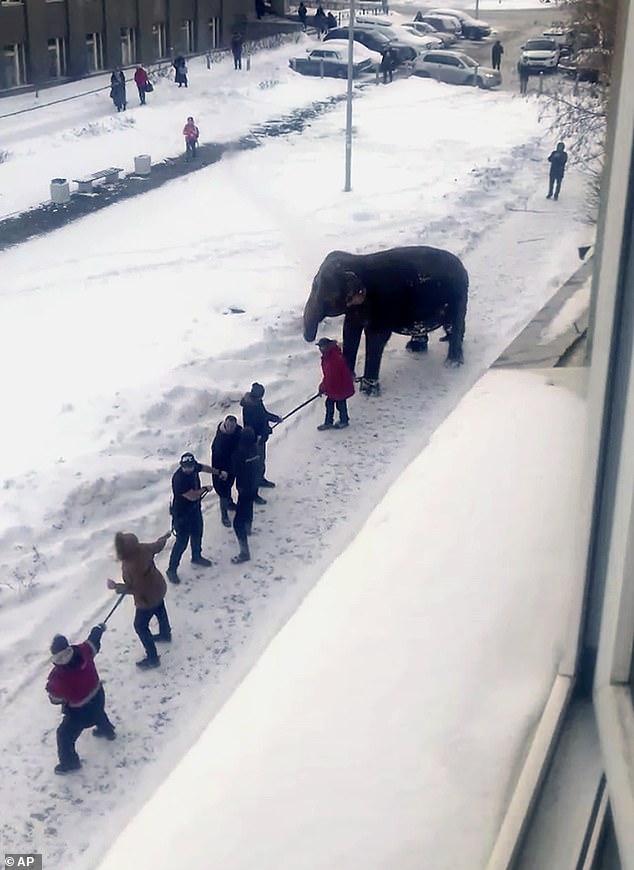 A group of residents attached ropes to the elephant’s legs and forced her to follow them. She seemed intent on playing in the snow before the group of seven formed and dragged her along the snowy path

Their patience is tested as the animal backs up and wanders across their rope which has partially fallen to the snow-clad pavement.

Moments later, the clip shows the team of people, who are trying to pull the elephant with them, has grown from three to seven.

Their efforts appear to have paid off as the animal reluctantly obeys and starts wandering at a quicker pace in their direction. 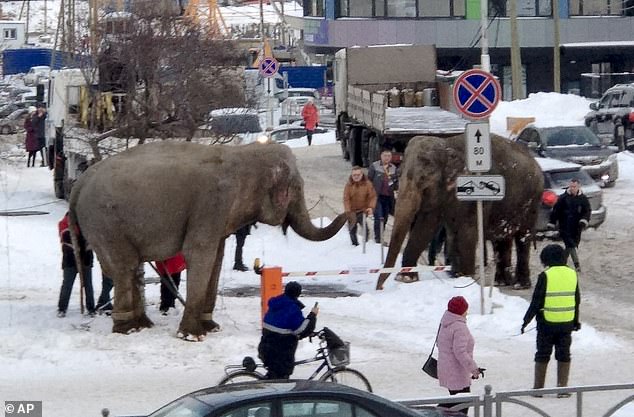 The circus joked how the ‘elephants wanted to get some new experiences before a long journey, and they got them’

But with seconds, the elephant starts to veer off towards the right and risks ruining it.

The wild animal follows backwards, in the clip from January 23.

When the circus’s troupe tried to load the animals into a truck for the next destination, they resisted and walked away.

Handlers finally got a rope around one of the elephant’s front legs, but it took a dozen people to pull her back.

Circus art director and host Sergey Bondarchuk told Russia Times: ‘The elephants have their own character and emotions, they are very smart.

‘They walked outside and got very happy from seeing the snow, the trees and the pedestrians whom they took for spectators.

‘We love our animals a lot, they are our family. They too love the circus, they get bored without work.

‘Our animals will live and die with us, they won’t survive in the wild.’

Brit dad, 42, fighting for life after hitting his head on bottom of Spanish hotel pool and breaking his back in five places