Homicide Squad detectives are investigating the deaths of two men, one who was found dead inside a Warburton home on Wednesday night and the other in a nearby toilet block.

Police were called to the Clark Street home about 8.30pm on Wednesday after receiving reports of shots being fired at the property. Upon arriving at the home officers found the body of one of the men. 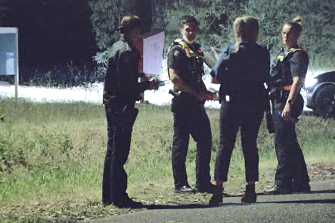 A woman who was also at the property at the time was unharmed.

Shortly after attending the home, police received reports of a dead man in Wesburn. Officers went to a toilet block at a reserve on Warburton Highway, about 6 kilometres from the Clark Street home, where they found the body of the other man.

The incident is being treated as a murder-suicide.

In a statement, Victoria Police said the circumstances were still being investigated, but detectives were not looking for anyone else in connection with the incident.

Both men are yet to be formally identified.

Anyone who may have information is asked to contact Crime Stoppers on 1800 333 000 or report the information online.

What time is Have I Got News For You on BBC One and who’s guest hosting with Paul Merton and Ian Hislop?