The real hunt for Red October: Major US operation to track deadly Russian subs lasted for weeks off the East Coast but found nothing as US Navy warns the waters are no longer a ‘safe haven’

The U.S. Navy has spent weeks trawling the North Atlantic in the hunt for a deadly Russian submarine that was known to have deployed into the waters off the East Coast of the United States.

The Project 885 Yasen class guided missile submarine Severodvinsk is built from the very latest in Russian technology and was thought to be just a few hundred miles away from the North American coastline in the fall of 2019.

Such was the worry of the U.S. military, the search involved a large number of Navy submarines, ships, and maritime patrol aircraft, all of which proved fruitless after the sub remained undetected throughout, according to The Drive.

The vessel, which can carry up to 40 Kalibr missiles, among other weapons, is known for having an especially low acoustic signature and proves especially difficult to pick up on all manner of sophisticated detection equipment including Sonar.

The worry from Navy commanders was the possible presence of nuclear missiles with a possible range of up to 1,600 miles being so close to the U.S. mainland. 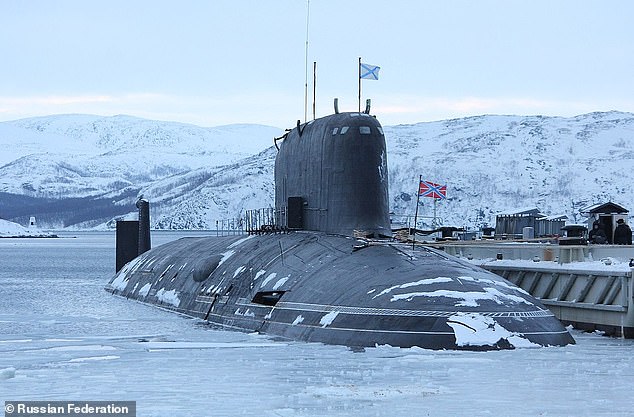 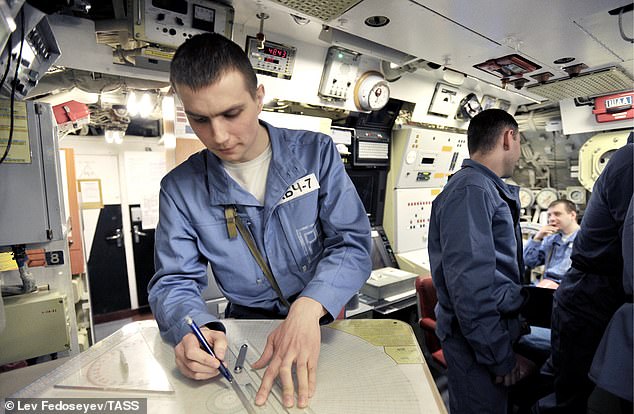 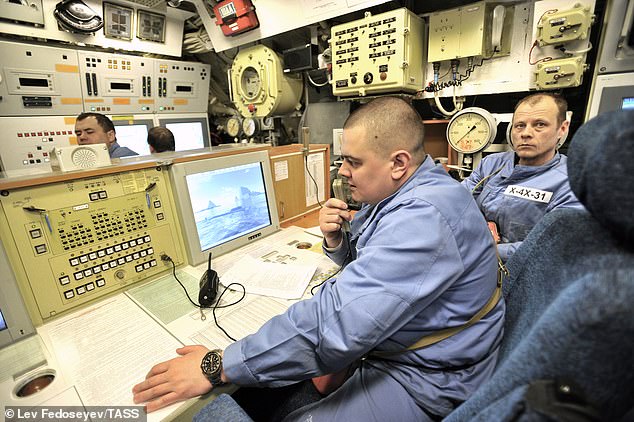 The 13,800-ton, 390-foot long, submarine is a highly automated vessel with a crew of only 32 officers and 58 enlisted submariners 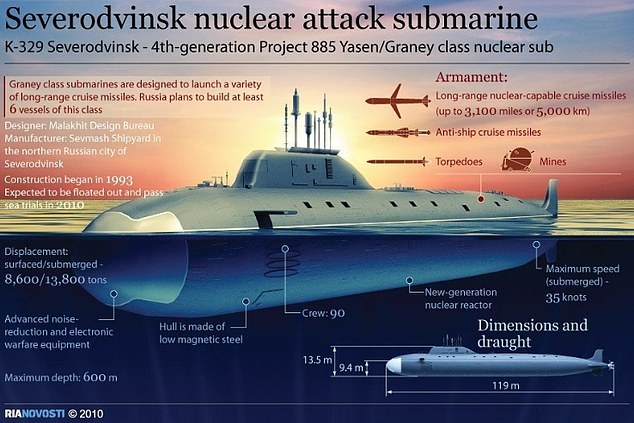 The submarine is thought to be the most powerful multipurpose submarines in the Russian navy, armed with 24 cruise missiles and with a top speed of up to 35 knots

The mission to find the secret sub was remarkably similar to that of the plot of the Tom Clancy novel and 1990 film, The Hunt For Red October, which told the story of a Soviet submarine equipped with innovative stealth technology.

In the film, the submarine Red October was heading for the East Coast and was virtually invisible.

It appears that such technology is on board the Russian’s latest spy sub, the Severodvinsk of which the country hope to build eight similar vessels.

Some Russian sources such as Russia Beyond the Headlines have suggested that Severodvinsk is equipped with active anti-torpedo defenses and some sort of anti-air capability.

The 13,800-ton, 390-foot long, submarine is highly automated vessel with a crew of only 32 officers and 58 enlisted submariners according to USNI News.

The sub also carried anti-submarine missiles and has the capability to lay mines along with its normal complement of torpedoes.

The Russian attack boat was under construction since 1993 before it began sea trials in 2011 and then fully operation in 2014. 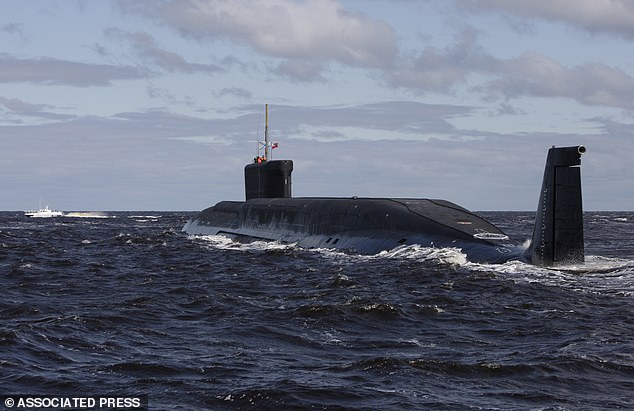 There is major concern in the rise in the number of increasingly deadly Russian submarines patrolling the East Coast. Pictured, a Russian nuclear submarine, the Yuri Dolgoruky, in 2009 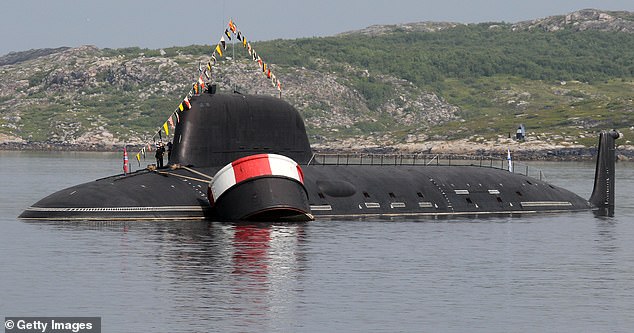 News of the essentially failed mission comes as U.S. Sailors have been warned to be on alert as they sail to and from ports along the Eastern seaboard and to no longer assume the Atlantic Ocean is a ‘safe haven’.

The unsettling warning came earlier this week from Vice Admiral Andrew ‘Woody’ Lewis, the current commander of the United States Second Fleet and NATO Joint Force Command for the Atlantic.

Lewis says the issue is a rise in the number of increasingly deadly Russian submarines patrolling the East Coast – the same waters the Navy operate out of. 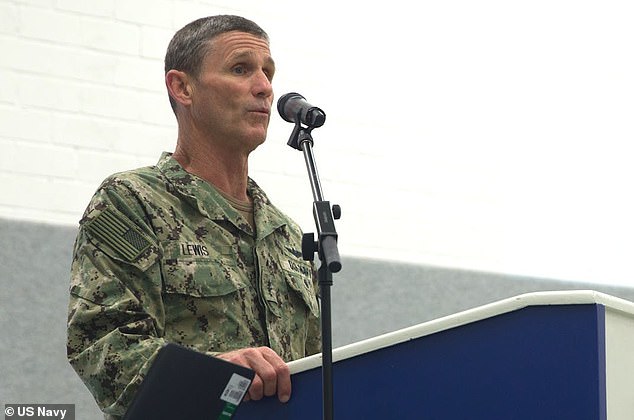 ‘The homeland is not a sanctuary. Sailors can expect to be operating in a contested space once they leave Norfolk,’ Lewis said during a maritime security event on Tuesday at the Washington, D.C.-based Center for Strategic and International Studies.

‘Over the last 20 years, most of the time we got underway from Norfolk in order to operate somewhere else, not in the Atlantic,’ Lewis said. ‘Our ships can no longer expect to operate in a safe haven off the east coast or merely cross the Atlantic unhindered to operate in another location,’

Lewis was speaking just as the Pentagon also confirmed it had deployed a new, low-yield submarine-launched nuclear warhead known as the W76-2. 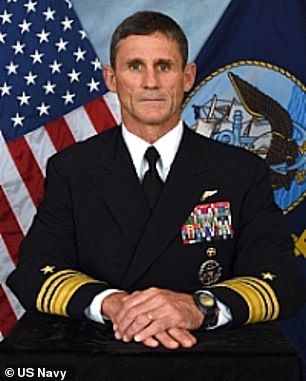 Vice Admiral Lewis says the issue is a rise in the number of increasingly deadly Russian submarines patrolling the East Coast – the same waters the U.S. Navy operate out of

‘We don’t have to look hard to see that the world is only getting more complicated… the Atlantic Ocean is a battle space that can’t be ignored.’

‘We are seeing an ever-increasing number of Russian submarines deploy in the Atlantic. And these submarines are more capable than ever, deploying for longer periods of time with more lethal weapons systems.’

The stark warning came just weeks after reports that a Russian spy ship was lurking in waters off the East Coast and operating in an unsafe manner.

‘We have seen some of our ships, the USS Mahan for example, in the early stages of their training cycle operating on station in the Atlantic with a Russian intelligence ship when it visited our coastline late last year,’ Lewis said.

‘Real world requirements do not discriminate. The intelligence ship did not care at what phase of training our ships were in or if it had achieved its full certification.’

The Russian ship, the Viktor Leonov, was operating in an ‘unsafe manner’ off the coast of South Carolina and Georgia according to the Military Times.

The Yasen Class nuclear-powered cruise missile submarines (SSGN) represent the most modern and potent Russian submarines are and widely regarded as being similar to the latest Western submarines.

The closest comparison is the US Navy’s Seawolf Class but the Russian design incorporates a large bank of vertical launch tubes (VLS) for cruise missiles.

The submarine is thought to be the most powerful multipurpose submarines in the Russian navy, armed with 24 cruise missiles.

The 13,800-ton, 390-foot long, submarine is a highly automated vessel with a crew of only 32 officers and 58 enlisted submariners.

It is far quieter than previous Russian submarines and has a maximum ‘silent’ speed of about 20 knots.

Some Russian reports state the sub has a maximum speed of 35 knots.

The boat has 24 missile tubes which can carry the supersonic NPO Mashinostroyeniya P-800 Oniks anti-ship missile which can hit targets roughly 200 nautical miles away.

‘This unsafe operation includes not using running lights while in reduced visibility conditions, not responding to hails by commercial vessels attempting to coordinate safe passage and other erratic movements,’ the Coast Guard posted on a bulletin in December.

‘Vessels transiting these waters should maintain a sharp lookout and use extreme caution when navigating in proximity to this vessel. Mariners should make reports of any unsafe situations to the United States Coast Guard,’ the Coast Guard said in its safety message.

The Russian spy ship was operating a ‘couple hundred’ miles off the East Coast.

It’s not the first time the Viktor Leonov has been spotted conducting intelligence operations off the U.S. coastline.

In 2017, the Leonov was trailed by a Coast Guard vessel but was operating in international waters.

The Russian surveillance ship has been spotted conducting operations on a U.S. submarine base in New London, Connecticut, and other Navy bases in Florida and Virginia as far back as 1998.

‘They routinely deploy intelligence vessels worldwide to monitor the activities and particularly naval activities of other nations, but then again conducted lawfully in international waters and not unlike operations we conduct ourselves,’ then-Penatgon spokesman Capt. Jeff Davis said in 2017 about the Leonov. 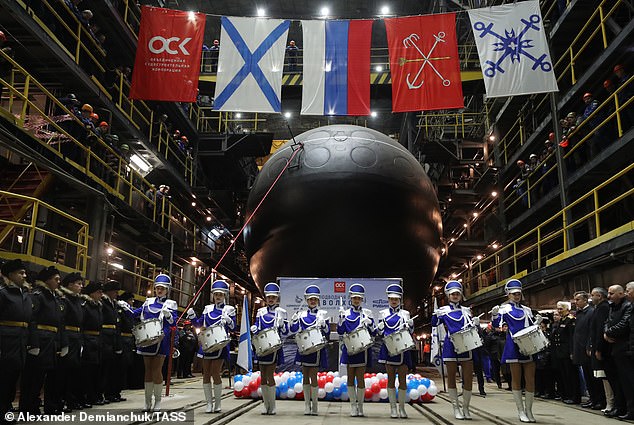 A ceremony took place in December at the Admiralty Shipyard to launch the Project 636.3 submarine B-603 Volkhov of the Russian Pacific Fleet, the latest Russian sub

The fleet was originally created to keep an eye on Russia during the Cold War but the Navy dissolved the fleet in 2011 in order to focus on counter terrorism in the Middle East and Afghanistan.

However, in recent years with Russia once again emerging as a threat, the Navy again resurrected the 2nd Fleet in an attempt to once again dominate the waters of the Atlantic and Arctic.

One man killed, one fighting for life after cougar attacks bikers