UK Covid cases rise slightly while infections sweep Europe: Positive tests up 9.5% to 40,004 as deaths drop by two to 61 over last week

Britain’s Covid-19 infections have increased by almost 10 per cent as Sajid Javid urged people to get their booster jabs to ensure the nation can ‘look forward to Christmas together’.

Department of Health bosses reported a further 40,004 cases today, a rise from the 36,517 reported last Sunday.

The number of people dying with the virus saw a 3 per cent drop, with 61 deaths reported today compared to 63 on November 14, bringing the UK total to 143,927.

Separate figures published by the Office for National Statistics show there have been 168,000 deaths registered in the UK where Covid-19 was mentioned on the death certificate.

It comes as Europe descended into a third day of violent carnage as tens of thousands of people in Belgium took to the streets to protest against the return of strict lockdown rules aimed at curbing a surge in Covid infections across the continent. 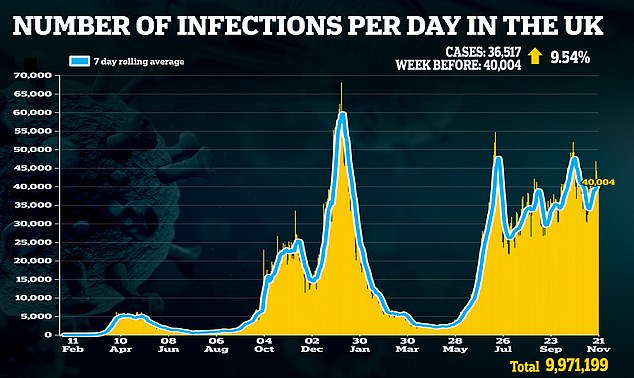 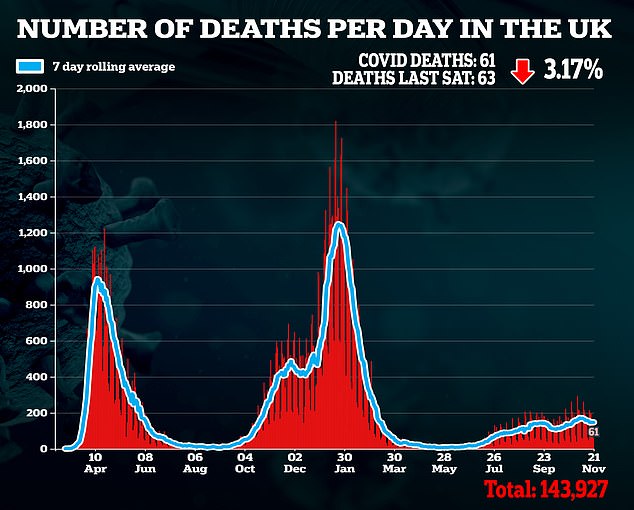 Nearly 40,000 people descended on the capital Brussels to protest against new anti-Covid measures banning the unvaccinated from entering restaurants and bars.

Some protesters were seen throwing projectiles at riot police and in response, officers fired water cannon and tear gas at the group.

Video footage from Brussels shows a large group of protesters shouting at police as some light flares and throw them at the officers – one man can even be seen mooning at them.

The protest came just hours after it emerged Germany is set to follow Austria’s example in making vaccinations compulsory with ministers admitting that the move is ‘unavoidable’ amid a fourth wave of the pandemic which is crippling the country’s hospitals. 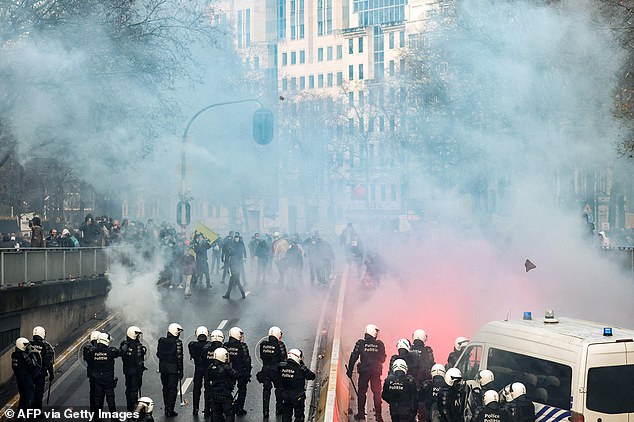 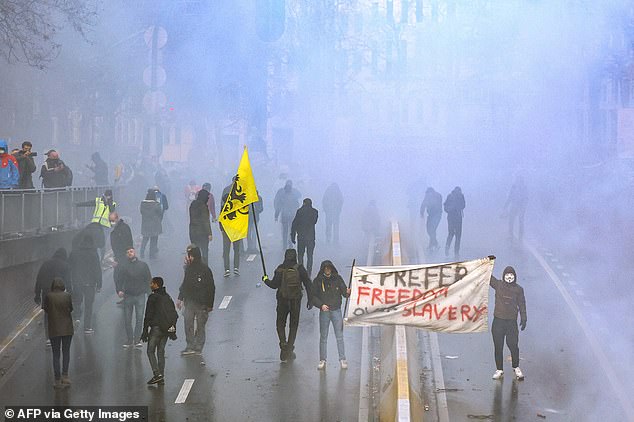 Tens of thousands of protesters took to the streets of Brussels today as violence erupted. Protesters can be seen holding a sign which reads ‘Freedom over slavery’ 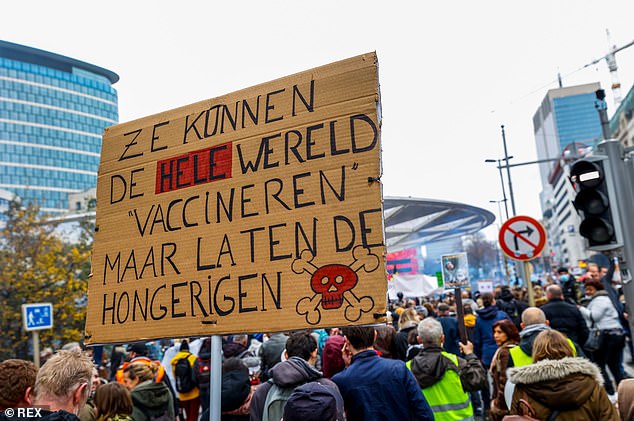 Protesters took to the streets of Brussels on Sunday to protests against the Covid-19 measures. This sign reads: ‘They can vaccinate the whole world but leave the hungry’

Europe has become the epicentre of the pandemic once again, with the World Health Organisation warning that the Continent was the only region in the world where deaths had increased as Covid-related fatalities spiked by five per cent just this week.

In France, the government has warned that the fifth wave of coronavirus are rising at ‘lightning speed’, with new daily Covid cases close to doubling over the past week.

In Belgium, cases have been surging, with infections reaching 13,836 on Sunday. In response, the government has introduced restrictions including a ban on the unvaccinated from venues such as restaurants and bars, and an order to work from home at least four days a week. 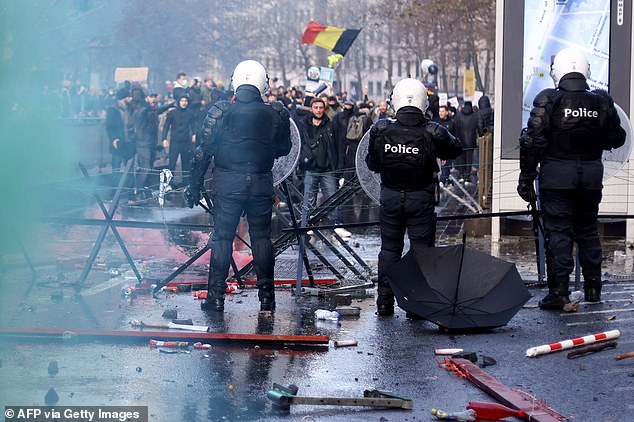 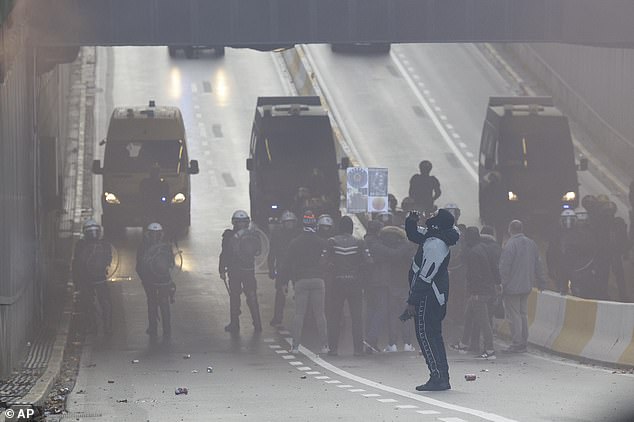 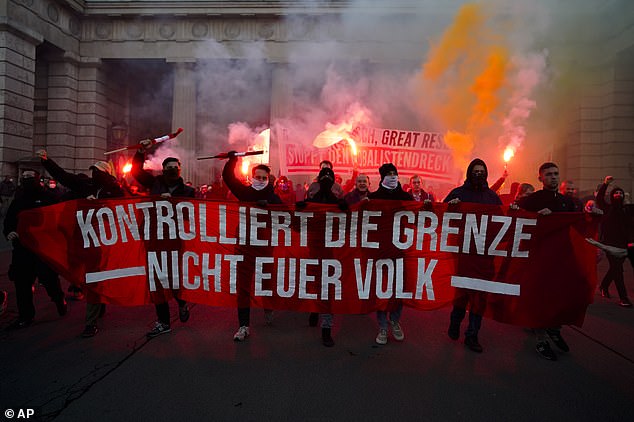 AUSTRIA: Protesters carrying a banner reading ‘Control the border. Not your people’ at the anti-lockdown demonstration held by the far-right Freedom Party in Vienna on Saturday 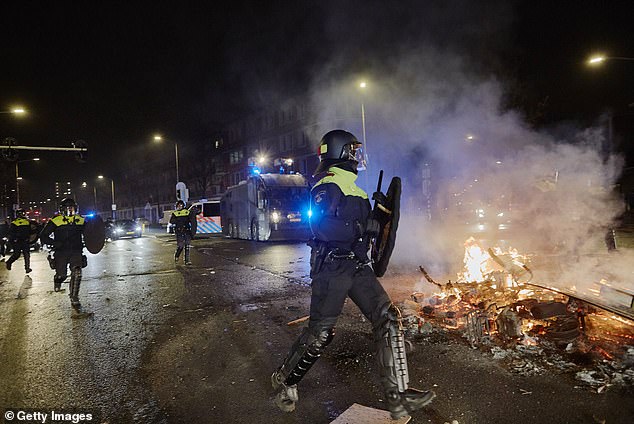 THE NETHERLANDS: A day after Rotterdam rioting that saw seven people injured, thousands more took to Amsterdam’s central Dam Square and The Hague (pictured above), with seven arrests being made according to police

Police said 35,000 protesters marched from the North Station in Brussels on Sunday afternoon against a fresh round of Covid measures announced by the government on Wednesday.

The demonstration, called ‘Together for Freedom’, saw some protestors clash with riot police near the Belgian capital’s EU and government district.

Many of the protestors caught up in the clash were wearing hoods and carried Flemish nationalist flags.

Meanwhile, Sajid Javid today insisted it is not time for the Government to trigger its coronavirus Plan B as he urged people to get their booster jabs to ensure the nation can ‘look forward to Christmas together’.

The Health Secretary said that the country is ‘not at that point’ of needing restrictions to be re-imposed. 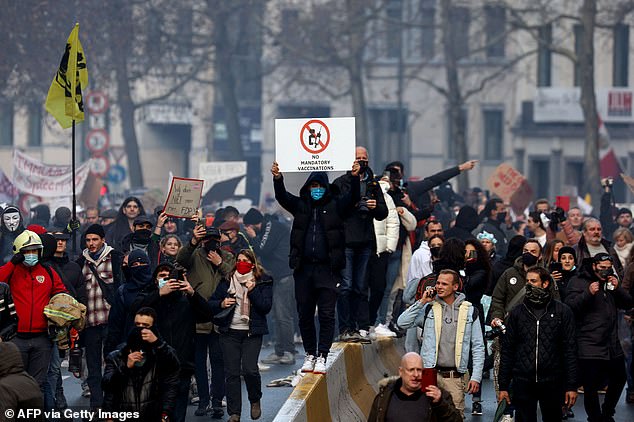 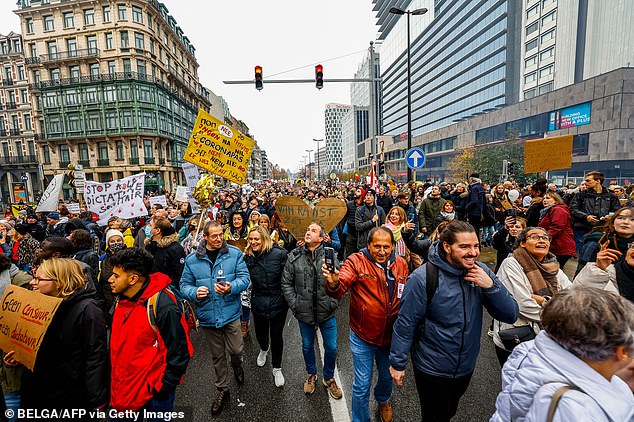 Nearly 40,000 people descended on the capital Brussels to protest against new anti-Covid measures banning the unvaccinated from entering restaurants and bars 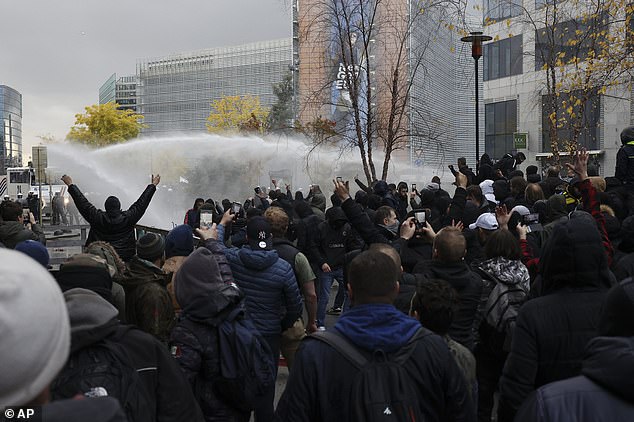 Riot police uses a water canon against protestors during a demonstration against the reinforced measures of the Belgium government to counter the latest spike of the coronavirus in Brussels, Belgium, on Sunday

But he said ‘if we needed to take further measures with Plan B then we would do so’ as he stressed the Government is ‘not complacent in any way’.

Bookings for coronavirus booster jabs are opening this week for people aged 40 and over.

Ministers have faced fresh questions over whether they will push the button on Plan B after a coronavirus surge across Europe prompted some countries to return to lockdown measures.

The Netherlands has confirmed a three-week partial lockdown while Austria is imposing a full lockdown having announced that Covid vaccinations will be made compulsory from February next year.

The re-imposition of draconian curbs has prompted mass protests and some violent scenes in cities on the continent.

Thousands of people took to Amsterdam’s central Dam Square and the Hague on Saturday while similar demonstrations against restrictions also took place in Switzerland, Croatia, Italy, and North Macedonia.

The protests in the Netherlands came a day after Dutch police opened fire on protesters and seven people were injured in rioting that erupted in Rotterdam.

Mr Javid was asked during an interview on Sky News this morning if people should brace themselves for a return of restrictions before Christmas.

The Health Secretary said: ‘As we all look forward to Christmas, it is very sad to see cases rising, surging, in certain parts of Europe.

‘We have always known that this virus, it loves the winter, it likes the cold, darker days that winter brings and we need to make sure we are doing everything we can to protect ourselves against that.

‘Almost 15 million booster jabs given already, covering some quarter of the population over the age of 12, almost 400,000 a day across the UK. 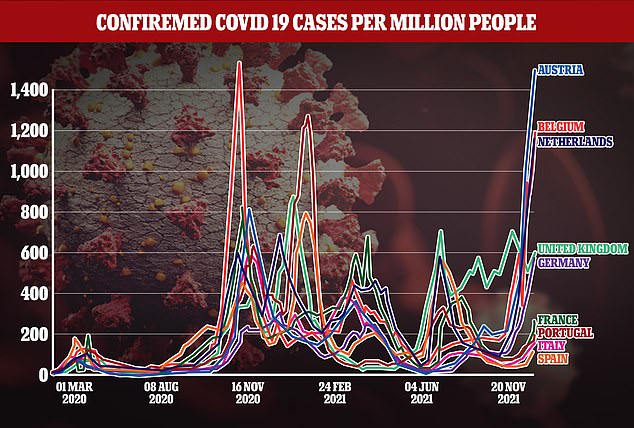 ‘That is making the difference and we know that because just this week there was more data published after more studies that shows that the protection you get from your booster… it almost doubles from 50 per cent to over 90 per cent.

‘I will be extending the booster programme starting tomorrow to 40 to 49-year-olds.

‘But we have all got a role to play in this, in our national vaccination programme and if you are eligible, whether it is your first shot, second shot or your third shot, please come forward and let’s look forward to Christmas together.’

People aged 40 and over will be able to book their third coronavirus vaccination as of tomorrow. Sixteen and 17-year-olds will also be able to book in for their second jab.

People eligible for a booster can get the top-up jab from six months after having their second dose.

But they will be able to book their appointment from 7am on Monday when the National Booking Service opens for people aged 40 and over.

More than 14 million boosters and third doses had been administered in the UK as of Friday, with more than one million top-up jabs recorded since Tuesday.