UK’s foreign aid spending falls by £712million to £14.5billion due to the impact of the coronavirus pandemic, the first time it has gone down since the global financial crisis in 2007

Britain’s spending on overseas aid fell by almost three-quarters of a billion pounds last year because of the coronavirus pandemic.

New statistics on the UK’s international aid spending in 2020 show it declined by £712million to £14.5billion.

The provisionjal figure is linked to the UK’s Gross National Income (GNI) level and was therefore hammered by the economic disaster that was the pandemic in 2020, when UK PLC spent many months largely shuttered.

The drop is the first decline in UK aid spending since the global financial crisis bit in 2007.

The new figures released by the Foreign, Commonwealth and Development Office today sparked calls for the Government to rethink its plan to cut back aid spending from 0.7 per cent of GNI to 0.5 per cent to boost the UK recovery.

Layla Moran, the Lib Dem foreign affairs and international development spokeswoman, said: ‘These statistics remind us that there was always going to be a cut to UK aid spending due to the pandemic – that’s the point of having a GNI target. As the economy shrinks, so does the development budget.

‘The Government is acting unlawfully and dishonestly by reneging on the 0.7 per cent of GNI spending commitment and cutting UK aid even further. 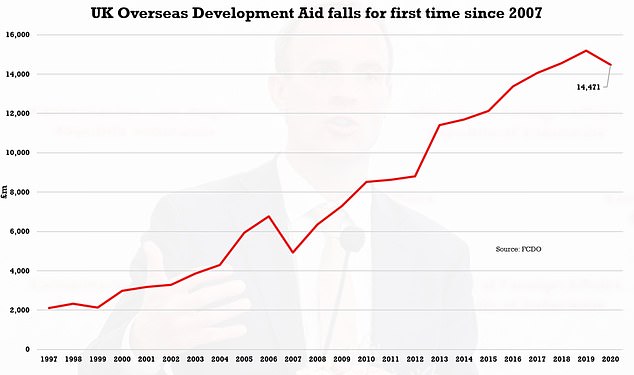 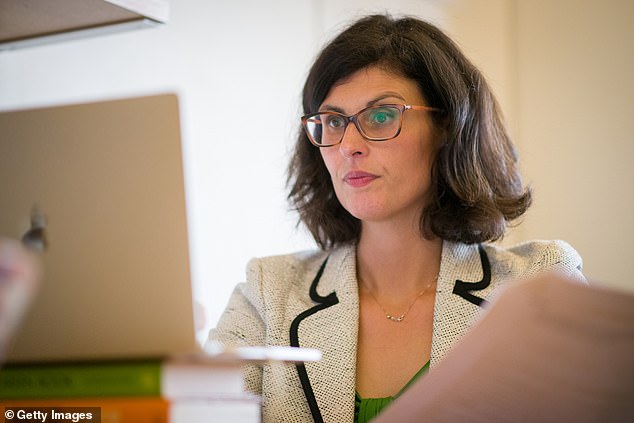 Layla Moran, the Lib Dem foreign affairs and international development spokeswoman, said: ‘The Government is acting unlawfully and dishonestly by reneging on the 0.7 per cent of GNI spending commitment and cutting UK aid even further’

‘Bilateral projects in Africa stand to lose the most. The Conflict, Stability and Security Fund already saw an 18.1 per cent decrease in funding in 2020 – how is cutting spending even further in our strategic interest at all?

‘UK aid and development represents the best of British humanitarian values. The Liberal Democrats urge Dominic Raab to do the right thing and bring his unlawful decision to Parliament for a vote after Recess.

‘Cutting our aid spending and breaking our promise to the world’s poorest makes a mockery of the Conservatives’ global ambitions and our reputation on the world stage.’

Last month it was revealed Boris Johnson’s plan to cut the foreign aid budget is set to be dramatically scaled back over fears of a Tory rebellion.

Ministers had announced they would change the law to lower the target to spend 0.7 per cent of national income on international development to 0.5 per cent.

This would have allowed them to slash handouts by £4billion to around £10billion and keep them at a lower level for years.

But amid warnings that the proposals, which would breach a 2019 Tory election manifesto pledge, will be blocked in both houses of Parliament, the Government is considering alternatives such as missing the 0.7 per cent target as a one-off this year and returning to it in 2022.

This means that the foreign aid bill could jump back to around £14billion in just a year.

Officials are studying whether the one-off cut could be done through a loophole which allows the target to be missed for reasons such as the economic situation without the need for a new law. Foreign Secretary Dominic Raab had previously discounted this option.

As he announced the proposed aid cuts last November, Mr Raab told MPs a new law was needed as the Government was not ‘able to rely just on the limited derogation written into [existing] legislation’.

Banks could be ordered to refund ALL fraud victims

Met Office weather warnings: Is there another storm coming this weekend?