A million UK Mercedes owners could get £10,000 each as lawyers sue car firm over emissions-cheating devices on diesel vehicles

Up to a million UK Mercedes-Benz owners could sue the German carmaker following allegations that illegal emissions-cheating devices were installed on some of its diesel vehicles.

A defeat device can artificially lower emissions in a car when the vehicle detects it is being tested, meaning they produce increased levels of harmful nitrogen oxides when on the road.

The allegations also follow the ‘dieselgate’ scandal in which Volkswagen and other car manufacturers were found to have installed defeat devices, leading to European carmakers having to pay out billions after legal action was taken.

Law firm Slater and Gordon, which represents more than 14,000 claimants in the case, said the value of each claim could reach £10,000, reported Bristol Live. 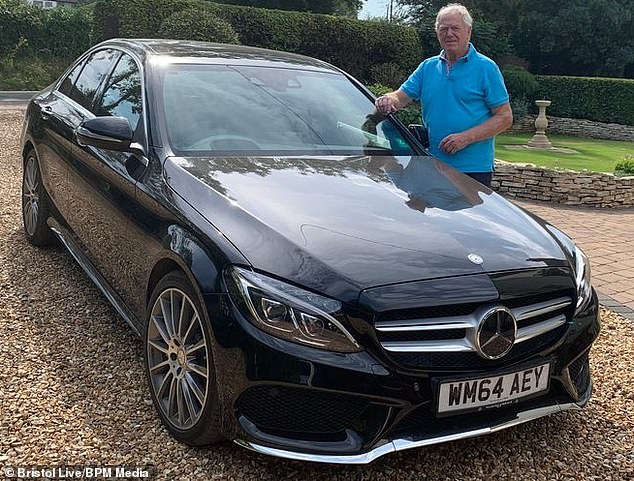 Ian Thomson, from Abbots Leigh near Bristol, says he has experienced performance issues with his Mercedes C300 hybrid since he purchased it from a dealership in Bath in 2014

A spokesperson added: ‘It is estimated that 600,000 Mercedes vehicles in the UK may have been affected, with a potential one million individuals able to make a claim.’

The affected diesel Mercedes vehicles were made between 2008 and 2018.

However, Mercedes said it will defend itself against legal action, a first hearing for which is expected in January, and described the allegations as ‘unfounded’.

A statement said: ‘The European Commission explicitly found no evidence that there was any agreement regarding the use of prohibited defeat devices.’

Slater and Gordon says drivers can still join the claim even if they bought an affected vehicle second-hand. 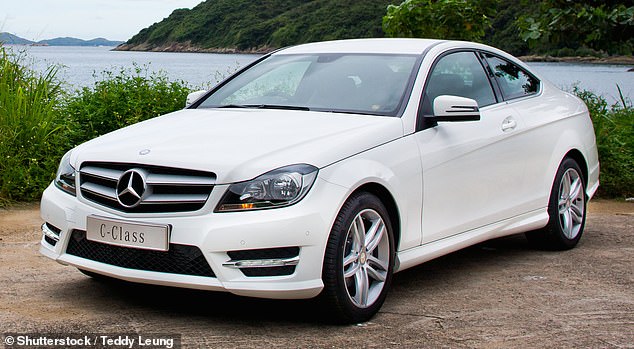 The retired chartered engineer, 77, said he had experienced fuel consumption and suspension problems with the car since his purchase.

He said: ‘I bought a Mercedes C300 hybrid in 2014 from the Cruickshank Mercedes dealership in Bath. I had environmental issues very much in mind.

‘I’m 77 and I want to do my bit for the planet before I pop off this mortal coil.

‘It had been advertised as being able to do 70 miles to the gallon, but even if I’m going downhill on the motorway I don’t get that.

‘I always felt cheated. If I’m driving on a flat road at 50mph I might get just about 60 miles to the gallon.

A Mercedes-Benz Vito. The car manufacturer insists it will defend any legal action and that its vehicles are ‘not subject to any impairment’

‘I also felt aggrieved with Mercedes because the suspension collapsed in the middle of the road, with the front bumper almost touching the ground.

‘Even though I had a low mileage, Mercedes didn’t want to know, and I had to pay well over £1,000 to get it repaired. As far as I’m concerned, Mercedes’ name stinks.’

He does not know whether the car’s issues are related to the alleged defeat device, but Slater and Gordon claim the ‘fix’ may have contributed to declining performance.

The law firm also said the alleged devices underrepresent the true volume of emissions being released and claim Mercedes diesel engines are in breach of emission regulations.

In 2018, Mercedes was found by the German Federal Motor Transport Authority to have installed cheating software on its diesel engines to avoid regulatory requirements.

As a result, the carmaker was forced to recall 774,000 vehicles across Europe – a decision being appealed by Mercedes.

In 2019, Mercedes’ parent company Daimler was fined £738.2million in Germany for negligent violation over avoidance of emissions regulations.

German authorities also ordered the carmaker to recall around 90,000 affected vehicles in England and Wales, while it also issued voluntary recall notices.

In addition to Slater and Gordon, which jointly led the Volkswagen dieselgate claim, law firms Hagens Berman UK, Leigh Day and PGMBM have also registered their intent to file a claim against Mercedes owner Daimler over the alleged devices.

A statement from Slater and Gordon said: ‘Following the emissions scandal Mercedes recalled vehicles in order to provide them with a software update known as a ‘fix’ to make the vehicles comply with emissions regulations.

‘In a survey of Slater and Gordon’s claimants, 25 per cent of those who have had the “fix” have experienced reliability issues since it was applied.’

Gareth Pope, a lawyer within the firm, added: ‘Our clients will allege that Mercedes knowingly installed unlawful defeat devices in hundreds of thousands of UK vehicles that allowed them to pass emissions tests designed to protect human health and the environment while still being highly polluting on the road.

‘As a result, our clients will allege that they have been deceived into purchasing these polluting vehicles for more than they were worth.

‘As part of the alleged deception, our clients will also allege that Mercedes participated in a cartel with other German manufacturers, including Volkswagen, to suppress the development and implementation of cleaner emissions technology in order to maximise their profits.’

Mercedes says it is appealing the orders of the German Federal Motor Transport Authority and insists its vehicles are ‘not subject to any impairment’.

A statement added: ‘Nonetheless, Mercedes-Benz has implemented the recall measures ordered by the KBA and undertaking voluntary measures for other diesel-powered vehicles in order to reduce on average nitrogen oxide emissions in real driving.

‘Our vehicles continue to have valid registration from the relevant authorities. The vehicles are not subject to any impairment in terms of use or functional capability. This also applies against the backdrop of the recalls that have been ordered by the KBA.

‘Our track record in Germany demonstrates our strong legal position. We see essential points of our legal opinion confirmed by the numerous rulings in the German regional and higher regional courts. The decisions are almost unanimously in our favour (in about 95 per cent of the cases).

The carmaker also insists it has cooperated ‘extensively’ with the European Commission.

The statement continued: ‘The European Commission explicitly found no evidence that there was any agreement regarding the use of prohibited defeat devices. The Commission made no findings on whether the diesel passenger cars sold during the relevant period met the regulatory requirements.

‘As we see it, the investigation is not related to lawsuits brought by customers in Europe in connection with diesel.’

This Is Queen Elizabeth’s Wake-Up Call Every Morning