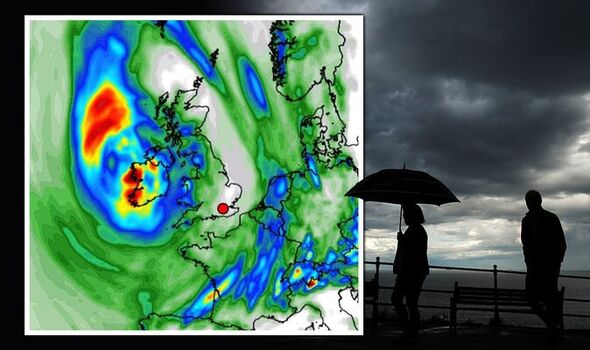 Britons face a three-day washout from the huge low-pressure system stretching from Scandinavia across the UK to the west coast of Spain. The centre of the low will anchor off the west coast putting exposed regions on alert for strong winds while threatening widespread showers and plunging temperatures.

Met Office meteorologist Alex Deakin said: “After the heat and humidity, it’s all change into the weekend with low pressure the dominant feature.

“That low pressure system isn’t moving too far and with its isobars fairly tightly packed, it will bring some fairly gusty conditions increasingly to western Scotland, and it will be unseasonably windy in the northwest.

“Then it’s a case of watching the showers develop, the closer you are to that low pressure system the more showers you are likely to see.

“There will be plenty of them across Wales western England and southwest Scotland.”

Thermometers will dip to single figures through the coming days, plummeting almost 20C from the scorching highs of the past fortnight. 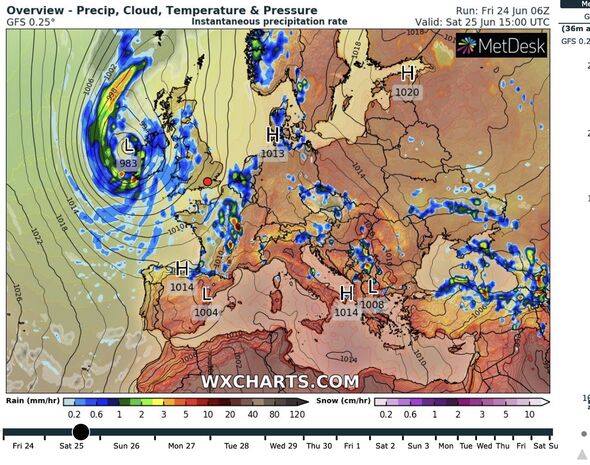 The mercury will go into freefall as a cold front drives wind and rain across the nation, Mr Deakin added.
He said: “A cold front will sweep away all that warmth and humidity and introduce much fresher air as it wanders across the country into Saturday.

“That cooler air will be in place through Saturday and lasting into Sunday.

“It is turning fresher but there will be plenty of showers around this weekend.”

Eastern and south-eastern regions will feel slightly warmer, but even here temperatures will lift only into the low 20Cs.

Strong gusts will make it feel much cooler across the country into the start of next week.

Mr Deakin added: “With that low in place, it will be very gusty and unseasonably windy for the time of year.”

Winds through the next couple of days will come in from the southwest hitting mainly western Britain. 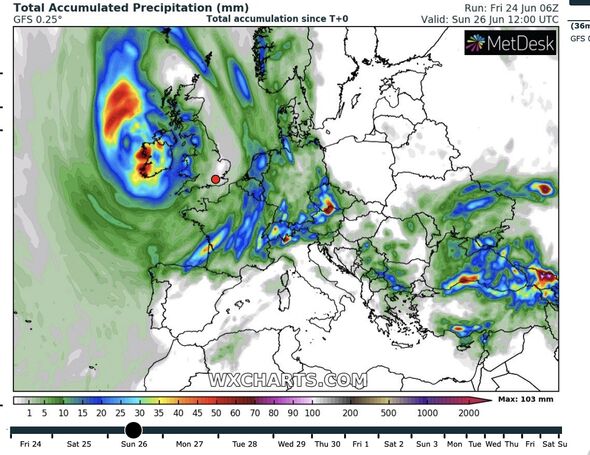 Showers could turn heavy in thundery in parts as the summer scorchio descends into an autumnal blitz.

Jim Dale, meteorologist for British Weather Services, said: “A low-pressure system in the Atlantic will push fresher winds into western parts of the country.

“We will be chasing showers, and there might be the odd heavier one with a rumble of thunder.

“There will be fewer showers on Sunday, and then on Saturday they will start to pick up again on Monday.”

The summer warmth will be blown away just in time for the start of Wimbledon fortnight.

Tennis fans are warned they may get wet next week as the stubborn Atlantic low steers showers across London. 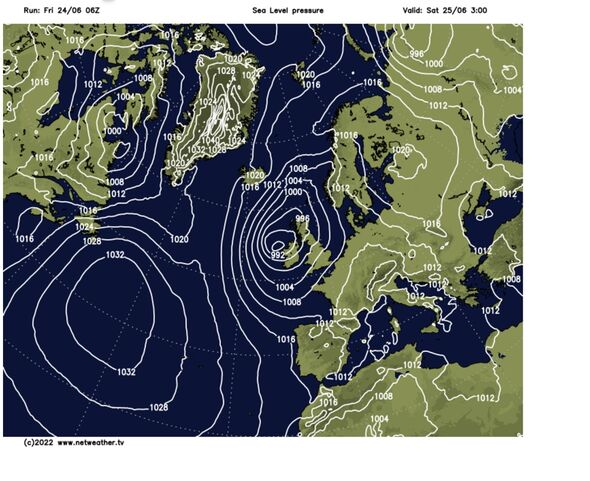 With the centre of the low settled to the west of the UK, eastern Britain may dodge the downpours.

John Hammond, meteorologist for Weathertrending, said: “Wimbledon arrives under the watchful eye of a slow-moving area of low pressure sitting on our doorstep.

“For much of the week ahead, that same low-pressure area will ensure a showery outlook.

“Furthest from the low pressure’s centre, some eastern areas of the country look set to see the best of some lengthier drier, brighter spells, especially early in the week.”

Exacta Weather’s James Madden added: “We expect to see a return to more normal temperatures and a littering of thunderstorm activity.”