Yellow weather warnings are in force for snow and ice in Scotland and for wind in the east and west of England. 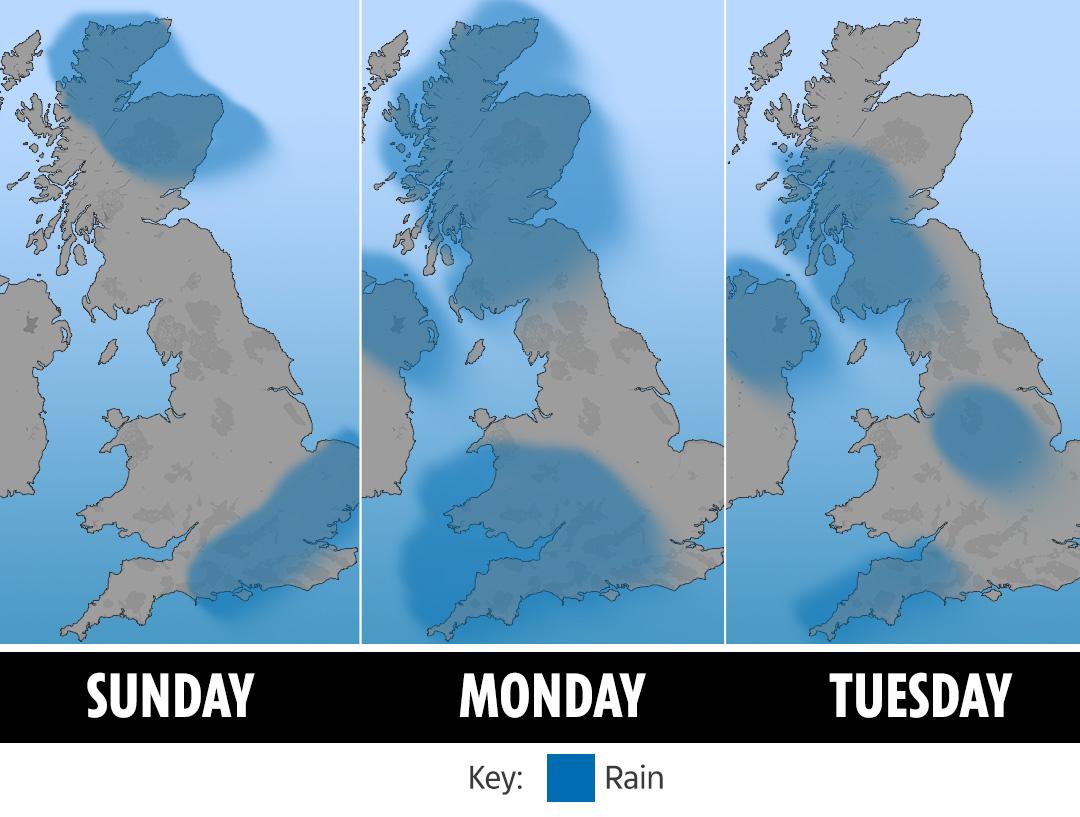 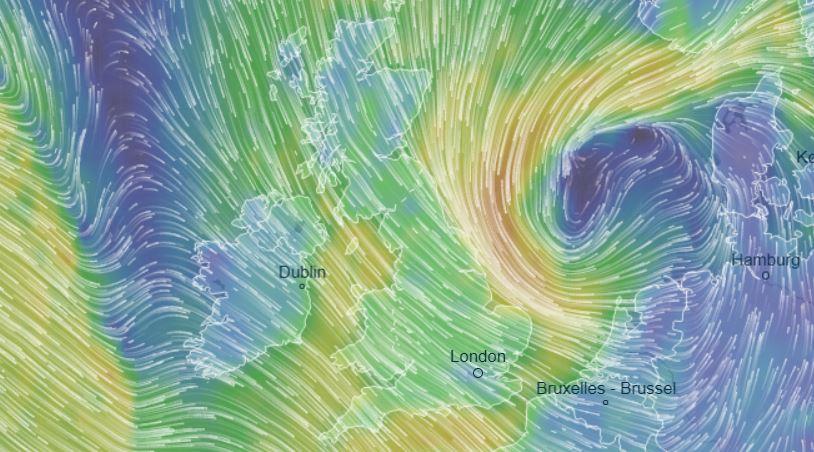 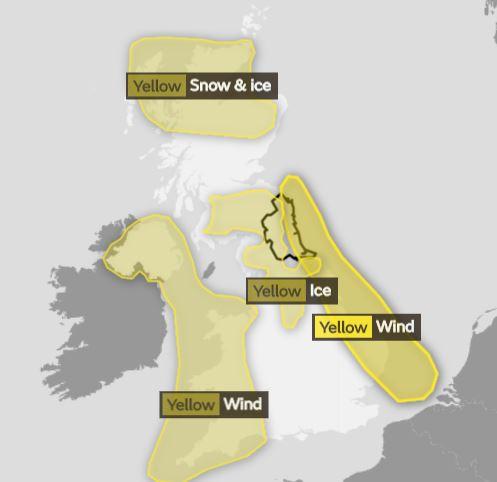 Thick cloud will blanket the country from the south of England to the north of Scotland – unleashing a deluge of dreary rain.

Met Office meteorologist said: “Colder air from the north will sweep across the country bringing a risk of ice and for some of us some snow.”

She said: “Bringing a very, very cold end to this week.”

Temperatures will be “just above freezing” on Sunday morning as westerly winds of up to 70mph buffet the UK.

The Met Office issued a yellow weather warning for snow in parts of Scotland "with blizzards possible on high ground."

Forecasters said transport disruption was likely due to ice and drifts thanks to 6in of fresh snowfall on higher levels.

Meanwhile, in rain-soaked Northern Ireland, Wales and the western half of England, a yellow wind warning is in place from 9pm tonight.

Met Office experts are warning that strong northerly gusts will sweep in from Saturday night before easing on Sunday.

The warning said: "Winds of 50 mph are possible inland and 60-65 mph around coasts."

In their latest UK weather forecast, Meteogroup said: "It will be wet with spells of heavy rain for Scotland and Northern Ireland, although snow is likely in the far north of Scotland, mostly over the mountains.

"It will be mostly cloudy in England and Wales, although rain will affect western parts during the afternoon and evening. Breezy in the south.

"In the evening it will be cloudy with showers or longer spells of rain for many.

"Much of the precipitation across the Scottish Highland will fall as snow, with some possible at lower levels.

"Later in the night, clear spells and wintry showers will develop for Northern Ireland and western Scotland."

Met Office meteorologist Becky Mitchell said: “It becomes more unsettled on Saturday as a low-pressure system moves in from the west bringing rain to most places and strong winds, particularly in the north.

“As this system comes through it will draw cold air in from the north before it moves off to the east bringing Arctic air in as it does so.

“There will be some very strong winds associated with it later on Saturday and on Sunday morning, these could reach gale-force.

“There will be a risk of snow showers in the north with much of the UK turning unsettled as the low passes across the country.”

But this is set to change drastically from as early as next week – with forecasters warning that a -11C Arctic blast will blanket the country with up to 13 INCHES of snow.

Weather charts by WX show that most of the country will be covered in the white stuff overnight next Wednesday.

The north west of England will see around 4in (12cm) of snow and even parts of the south east, including London, will get a dusting of about an inch (2.5cm).

By Sunday next week though things will have gotten even worse – especially over the hills of Scotland where more than 13in (34cm) is set to fall.

Next week looks like bringing further very cold weather and snow which could affect much of the country.

And by the following morning, the north of England will also be blanketed in up to 10in (26cm) of snow – likely to make for difficult travel conditions.

Exacta Weather’s James Madden said: “Next week looks like bringing further very cold weather and snow which could affect much of the country.

“Some of this snowfall could be heavy and towards the middle of next week there is the potential for some disruption due to the weather.

“We can expect more of the same through the rest of the month and through much of February.”

Overnight temperatures will widely sink below freezing through next week while daytime highs struggle to rise much above low single figures.

Icy winds over lying snow could make it feel close to -11C (12.2F) in parts of the north later this weekend – with "feel-like" temperatures of freezing forecast across the south.

Ms Mitchell added: "The start of next week will be on the cold side with the potential for more snow in parts of the UK.

“Monday will see a mix of rain, sleet and snow quite widely as the weather returns to being more wintry.

“We are expecting very low overnight temperatures which could sink below -10C (14F) where there is lying snow, frosts and the risk of ice.

“The cold weather looks set to continue into February when there is a risk of a more easterly weather pattern developing.”

Britons could be shivering in unusually cold conditions through the rest of winter and into spring, according to some long-range experts. 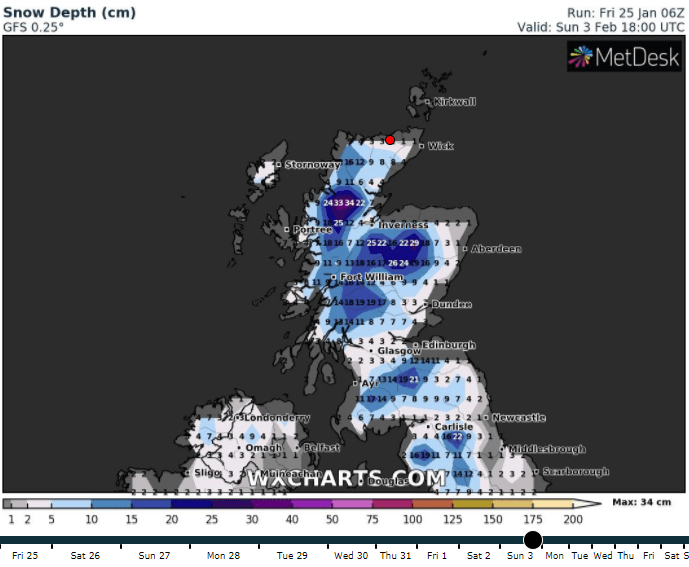 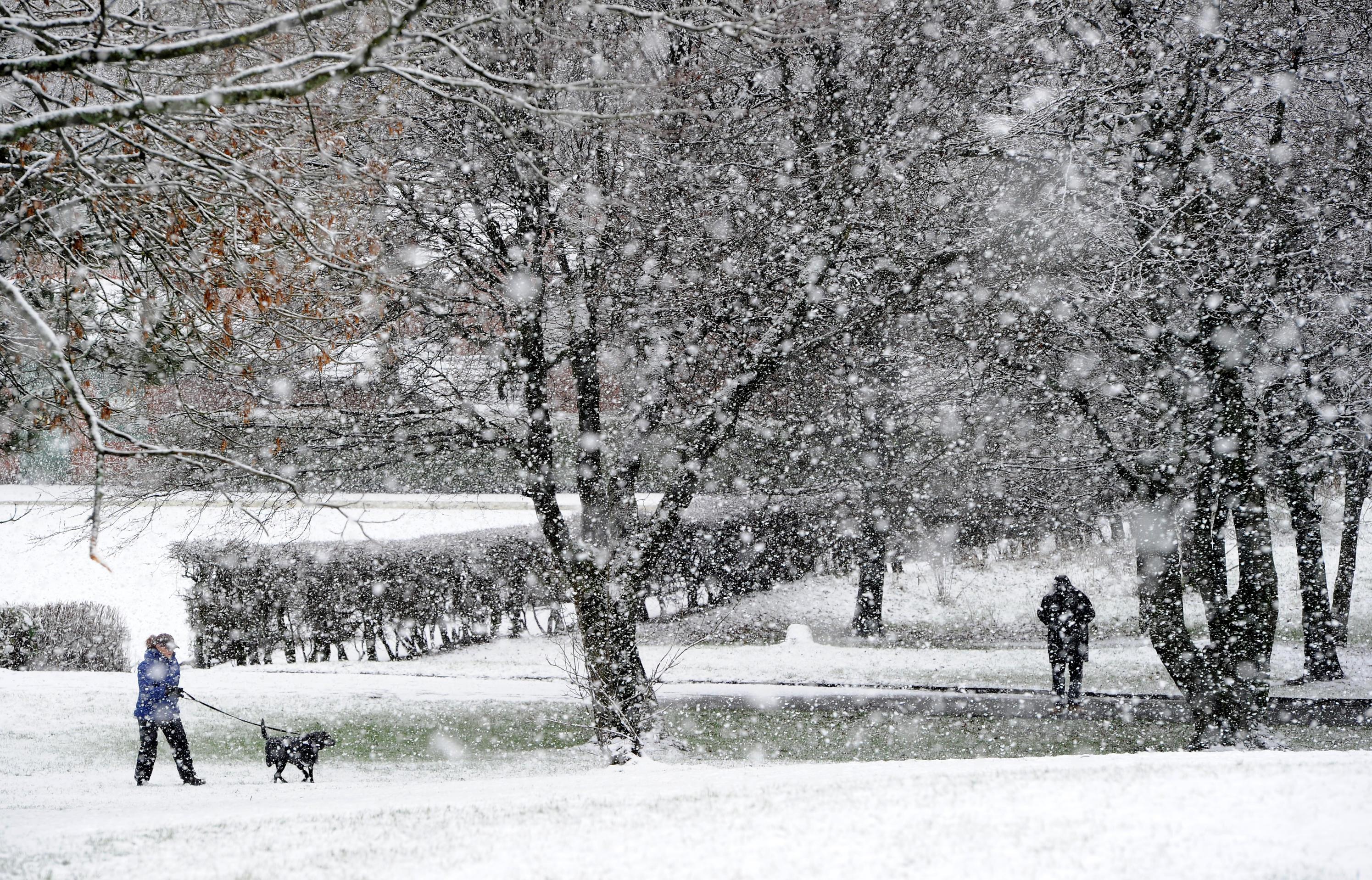 Kelly Marie Tran Speaks Out About Online Harassment: ‘I Won’t Be Marginalized’

‘Tesla tells employees to show up for work’ as GM, Ford, Chrysler and Fiat shut factories over coronavirus fears – The Sun