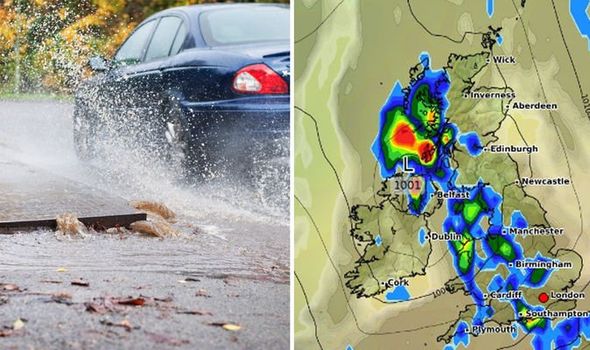 Met Office meteorologist Alex Deakin said: “Tuesday morning will begin dull and damp. In the south it will be fairly cloudy in some places, having a bit of sunshine and of course much of the south it is gonna be a dry day with sunshine. But, as we head further north, we’ll see more clouds and damp and drizzly conditions extending from the north coast of Wales into a good part of Yorkshire and Lancashire.”

The weather experts have also issued a warning for potential travel chaos later on in the week.

It reads: “Heavy showers and thunderstorms may cause some travel disruption and flooding in places during Thursday afternoon and evening.

“There is a small chance of fast flowing or deep floodwater causing danger to life.”

Mr Deakin said that further north it will be a soggy start for most of Scotland and Northern Ireland. 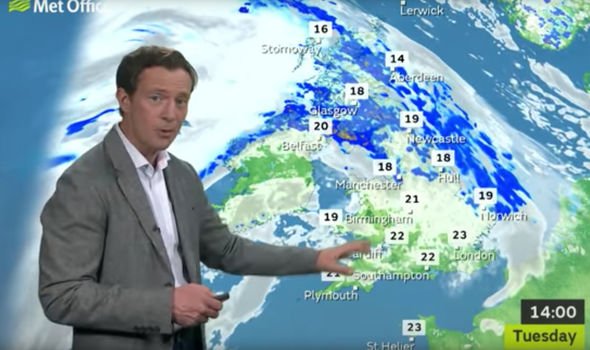 But, in the far northeast will see some of the brightest skies, in Shetland there will be sunny spells for much of the day.

Mr Deakin added: “But, much of the mainland of Scotland will see outbreaks of rain on and off as well as in Northern Ireland.

“The rain here could be a bit heavier later on with patchy rain over northern England.

“The weather will be dull and damp extending into parts of Norfolk and Lincolnshire, but much of the Midlands and southern England and South Wales will remain dry. 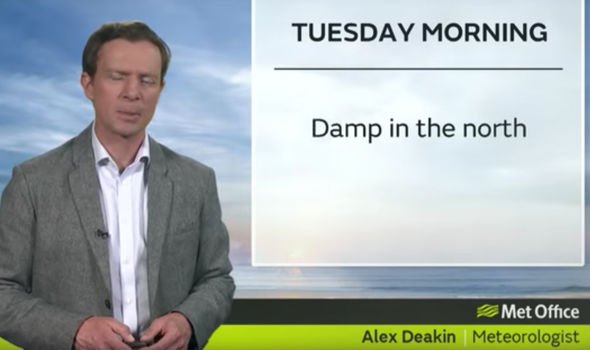 “It will be a fairly cloudy start to the day with sunshine that will lift those temperatures quite a bit to a warm humid feel, 23 maybe 24 Celsius (73 to 75 Fahrenheit) in places.

“Where it’s cloudy were still got temperatures will be in the mid to high-teens, so not an especially cold day, but it will feel pretty cool.

“The Aberdeenshire coast will see further rain and drizzle, now that rain could pep up a little bit across Northern Ireland.”

Mr Deakin went on to explain that in Scotland, there will be some heavier bursts of rain, possibly later on on Tuesday and through into the evening.

He added: “For the south it should be again a largely dry day, perhaps a bit more sunshine to end the day across South Wales and southern England.

“It will still be quite warm and humid overnight as we go into Wednesday, it’s a very similar story actually with much of northern Britain covered in clouds rain and drizzle.

“It will be quite a cloudy day with rain on Wednesday across parts of East Anglia the East Midlands.”

Did Nicki Minaj Lip Sync At Miami Show? Watch Video That Has People Wondering If She Sings Live