Justice for the victims of Bucha: Ukrainian prosecutors begin investigation into war crimes, including mass graves containing 410 victims and six civilians executed in a basement

Ukrainian prosecutors are expanding their war crimes investigations into the northeastern suburbs of Kyiv after Russian forces withdrew.

Investigations into civilian massacres carried out by Russian troops have primarily focused so far on the northwestern suburbs such as Bucha, Makariv and Borodyanka, but the Prosecutor-General’s Office said Tuesday it was also looking into events in the Brovary district, which lies to the northeast.

Russian troops advanced into that area last month before retreating to focus on fighting in eastern Ukraine.

The Prosecutor-General’s Office said the bodies of six civilians had already been found with gunshot wounds in a basement in the village of Shevchenkove and that Russian forces were believed to be responsible.

Prosecutors are also investigating an incident in which they allege Russian forces fired on a convoy of civilians trying to leave by car from the village of Peremoha in the Brovary district, killing four people including a 13-year-old boy.

Ukraine and Western leaders have in recent days accused Russian forces of committing atrocities against civilians in devastated areas around Kyiv that were under occupation – with Bucha proving to be the site of the most egregious examples of war crimes thus far.

Ukrainian authorities say over 1,200 bodies have been found in the area and that they are weighing cases against ‘500 suspects’, including Russian President Vladimir Putin and other top officials.

On Monday, the work of exhuming bodies from a mass grave in a churchyard in Bucha resumed after more than 400 dead civilians were discovered. The majority had been gunned down.

Meanwhile, Putin and Belarusian leader Alexander Lukashenko today declared reports of the Bucha massacre as fake and part of a Western propaganda plan. 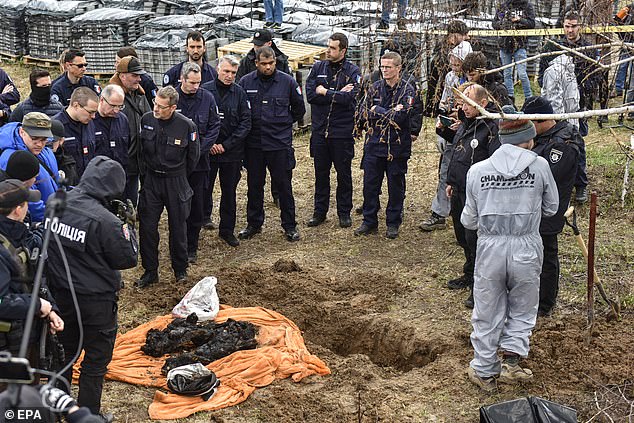 Members of an international team of war crimes prosecutors and Prosecutor General of Ukraine Iryna Venediktova (C) during a visit to a mass grave in Bucha, Kyiv (Kiev) area, Ukraine, 12 April 2022 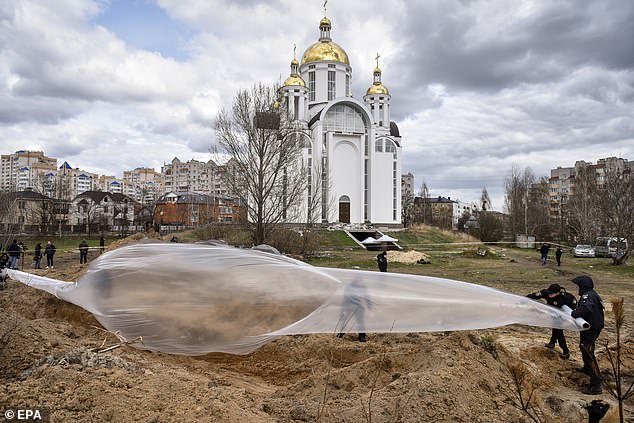 Forensic investigators began exhuming a mass grave in Bucha containing more than 410 bodies of civilians, according to Ukrainian officials. The UN Human Rights Council has decided to launch an investigation into the violations committed after Russia’s full-scale invasion of Ukraine, the Ukrainian Parliament reported 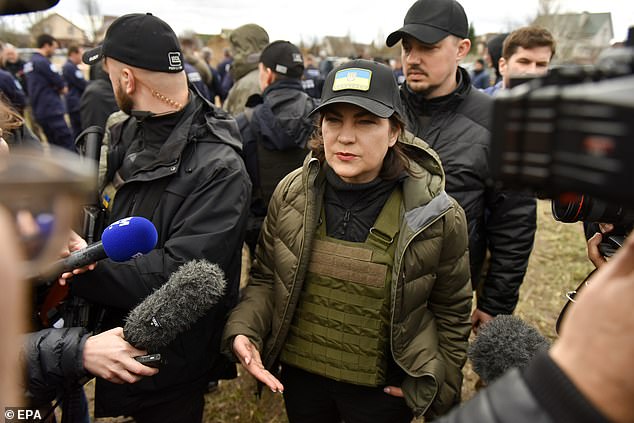 Prosecutor General of Ukraine Iryna Venediktova speaks to journalists during a visit to a mass grave in Bucha, Kyiv (Kiev) area, Ukraine, 12 April 2022 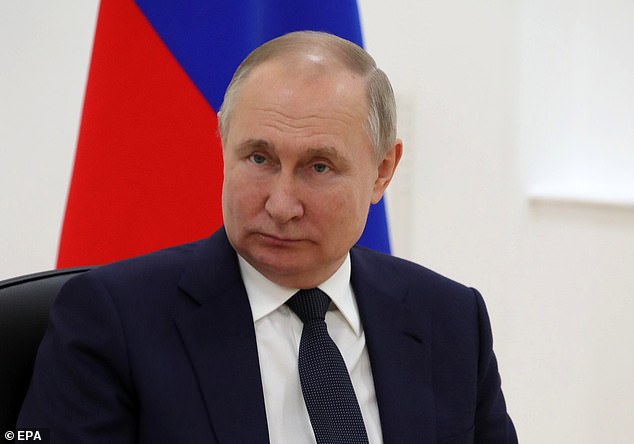 Ukrainian authorities say over 1,200 bodies have been found in the area and that they are weighing cases against ‘500 suspects’, including Russian President Vladimir Putin (pictured) and other top officials

An international team of forensic experts have deployed to Bucha, where Ukraine’s Prosecutor General Iryna Venediktova is leading the search for more bodies and the exhumation of several other mass graves.

The bodies of 132 civilians were also found shot dead in Makariv, a town about 30 miles west of the capital at the weekend. All died from bullet wounds, the town’s mayor said.

Roughly 40 per cent of the town has been destroyed, according to reports, which came after Ukrainian troops recaptured it from Russian occupation on March 22. Officials have been counting the dead ever since.

However, Putin today declared the mounting evidence to suggest his forces had carried out war crimes in Bucha as false, in his first personal statement on the topic.

During a joint press conference between Putin and Lukashenko, the Russian strongman dismissed the harrowing events of Bucha as fake while instead pointing to America’s bombing of Syria and Afghanistan as real instances of war crimes.

‘When [Western leaders] say ”Bucha” to me, I ask them – ”Have you ever been to Raqqa? Did you see how this Syrian city was turned to rubble by American aircraft?”, Putin said.

‘Corpses lay in the ruins for months decomposing. Nobody cared. No one even noticed.’

Lukashenko went even further, declaring that the Russian security service (FSB) could even prove that the events of Bucha were in fact concocted by British and other Western bad actors to discredit Russia’s ‘military operation’ in Ukraine.

‘Today we discussed this psychological special operation carried out by the British in detail,’ the Belarusian leader said.

‘If someone needs addresses, passwords, the car numbers and brands in which they arrived in Bucha, and how they did it, the FSB of Russia can provide these materials.

‘If not, then we can help in this regard.’ 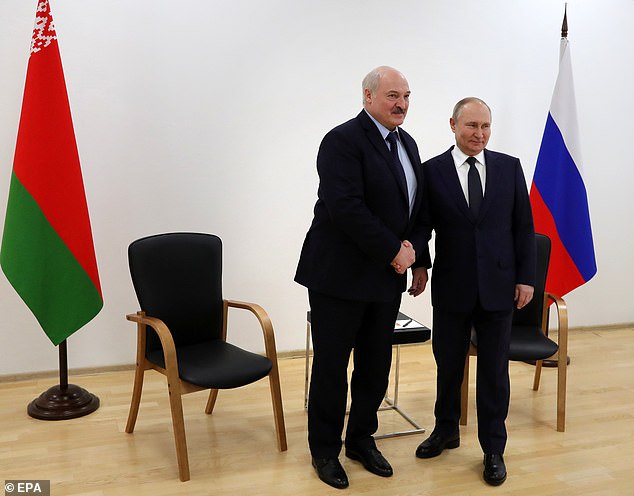 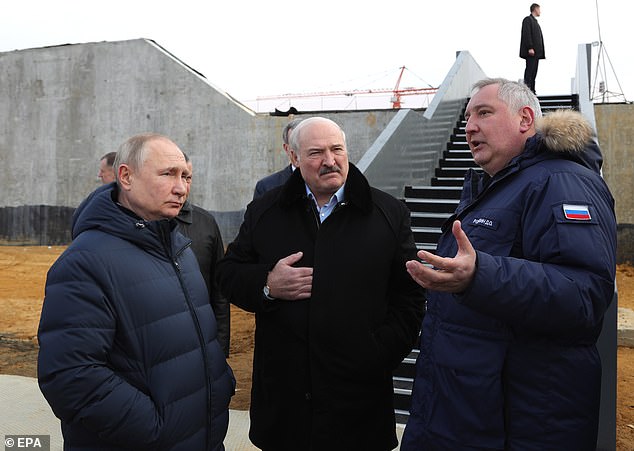 Ukrainian officials are also investigating a claim that a poisonous substance was dropped on besieged Mariupol yesterday, as Western officials warned that any use of chemical weapons by Russia would be a serious escalation of the already devastating war.

Thwarted in his apparent ambition to overrun Kyiv, Putin is now building up forces for a new offensive in the eastern Donbas region, and insisted that his campaign would continue until it achieves its goals.

He said Russia ‘had no other choice’ but to launch what he calls a ‘special military operation’, saying it was to protect civilians in the predominantly Russian-speaking Donbas.

As Ukrainian forces brace for a new attack, deputy defence minister Hanna Maliar said it was possible phosphorus munitions – which cause horrendous burns but are not classed as chemical weapons – had been used in Mariupol.

That city lies in the Donbas and has been razed in six weeks of pummeling by Russian troops that the mayor said has left more than 10,000 civilians dead, with their corpses ‘carpeted through the streets’. 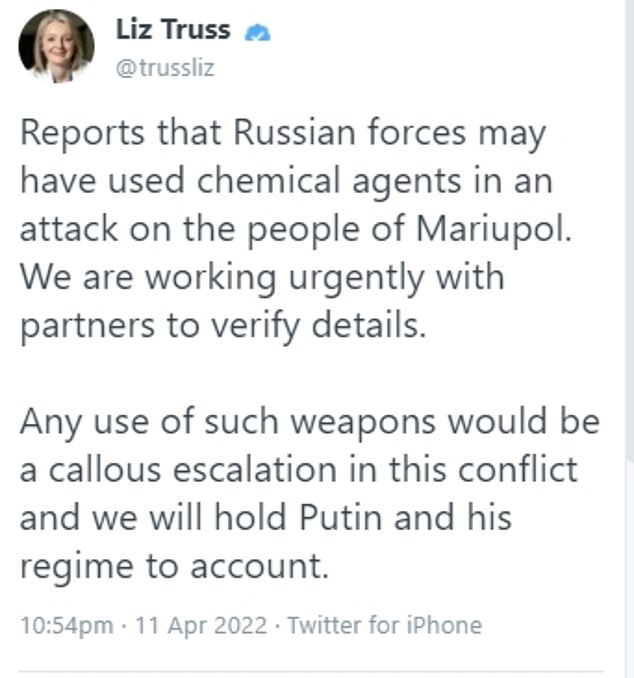 UK Foreign Secretary Liz Truss said use of chemical weapons ‘would be a callous escalation in this conflict’, while Australian foreign minister Marise Payne said it would be a ‘wholesale breach of international law’

Leaders inside and outside of the country said they were urgently investigating the unconfirmed claim by a Ukrainian regiment that a poisonous substance was dropped on fighters in Mariupol.

UK Foreign Secretary Liz Truss said use of chemical weapons ‘would be a callous escalation in this conflict’, while Australian foreign minister Marise Payne said it would be a ‘wholesale breach of international law’.

However, a U.S. defence official speaking on condition of anonymity said the Pentagon had not yet been able to confirm the use of chemical weapons.

The official added the United States had no information to support the movement of chemical agents by Russia in or near Ukraine.

Kamala Harris backed group that got accused 'murderer', sex offender and ‘criminals out of jail’ after BLM riots