Uncle Ben’s rice has announced it is ‘evolving’ its brand and will redesign its packaging in response to concerns about racial stereotyping – hours after Quaker revealed it was scrapping the Aunt Jemima name.

Parent company Mars, Inc on Wednesday revealed it was following suit in ‘helping to put an end to racial bias and injustices’, by making changes to its branding which has long featured a black rice grower as its logo.

‘As we listen to the voices of consumers, especially in the Black community, and to the voices of our Associates worldwide, we recognize that one way we can do this is by evolving the Uncle Ben’s brand, including its visual brand identity,’ spokeswoman Caroline Sherman said in a statement. 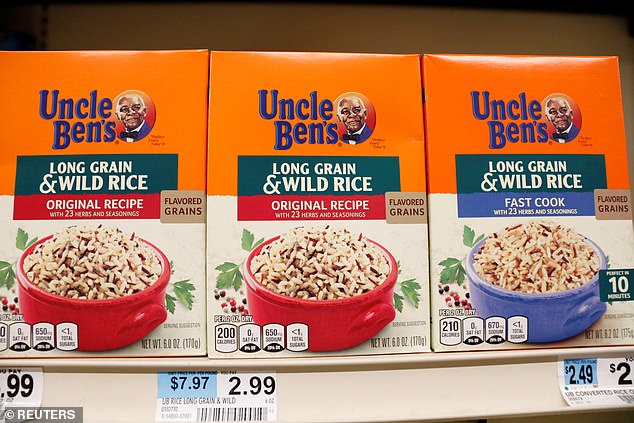 Uncle Ben’s rice will ‘evolve’ its visual brand identity, which has featured a black rice grower as its logo for years 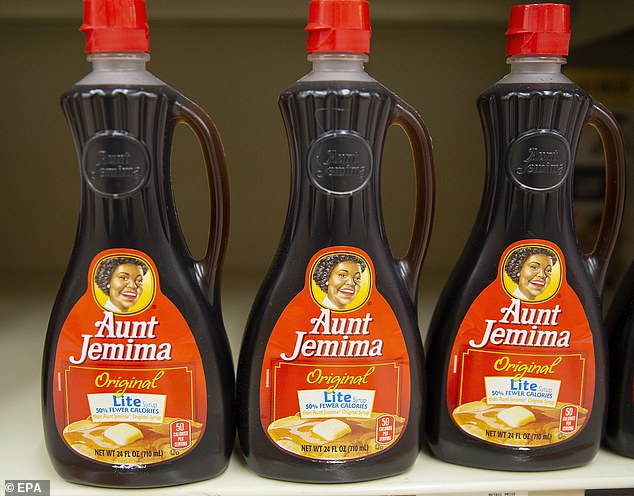 The company did not specify how or when the changes will be made, but said it is evaluating ‘all possibilities’.

Just like Aunt Jemima, the Uncle Ben character, which has served as the brand’s logo since 1946, has long been criticized over its racist origins.

According to the PR Museum, the term ‘aunt’ and ‘uncle’ in this context refers to how white southerners addressed older black people or African American slaves because they refused to give them courtesy titles such as ‘miss’ or ‘mister’.

Aunt Jemima, which has been face of the pancake and syrup brand for over 131 years, has also received renewed criticism over its prolonged use of the character which is based on the mammy – a black woman who worked for white families, nursing their children.

Quaker Foods said it would drop the name and logo after recognizing its ‘origins are based on a racial stereotype’. 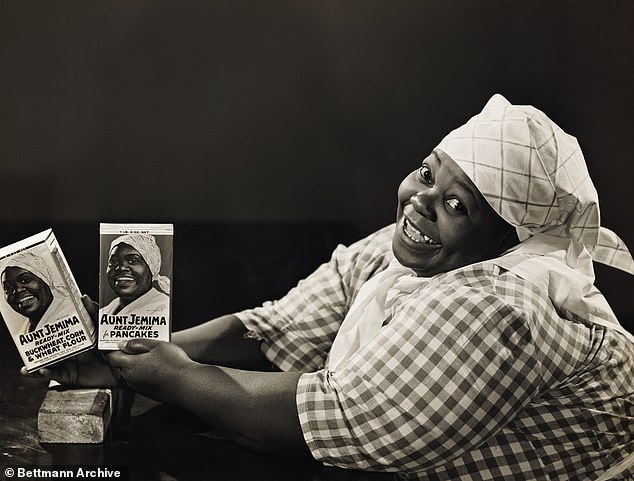 The Aunt Jemima brand has racist origins as it comes from a vaudeville era song ‘Old Aunt Jemima’ and its character was based off the mammie – a black woman who worked for white families, nursing their children. Anna Robinson (pictured) poses as the character in ads

‘As we work to make progress toward racial equality through several initiatives, we also must take a hard look at our portfolio of brands and ensure they reflect our values and meet our consumers’ expectations,’  vice president and chief marketing officer Kristin Kroepfl said in a press release earlier on Wednesday.

The company said it has tried to update the brand over the years in a ‘manner intended to be appropriate and respectful’ but has since acknowledged ‘those changes are not enough.’

Quaker, which is owned by PepsiCo, said it’s overhauled pancake mix and syrup will hit shelves by the fourth quarter of 2020. The company will announce the new name at a later date.

It comes amid a nationwide reckoning on racism in the America sparked by the May 25 death of George Floyd and has prompted a number of companies and brands to make changes aligned with achieving racial equality.

The Aunt Jemima character has racist origins, as it comes from a vaudeville era song ‘Old Aunt Jemima’ and is based off the mammy.

The changes drew reactions from people on social media, many who said it was long overdue 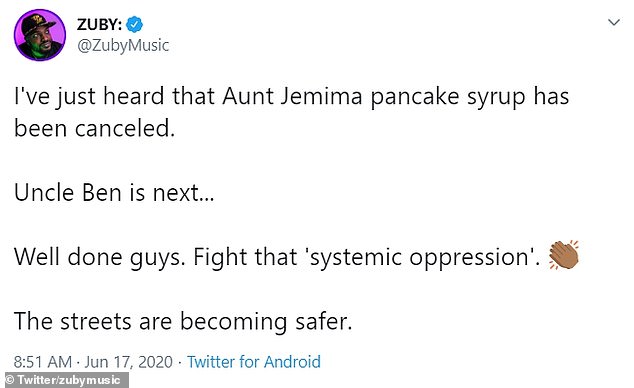 Rap artist Zuby tweeted that the Uncle Ben’s brand, which has depicted an elderly black man since the 1940s, should be next after the renaming of Aunt Jemima was announced

Chris Rutt and Charles Underwood of the Pearl Milling Company developed Aunt Jemima pancake mix in 1889, as the world’s first ready pancake mix, according to the brand’s website.

The R.T. Davis company purchased the Aunt Jemima Manufacturing Co. a year later, and the character was ‘brought to life,’ by Nancy Green, who was a storyteller, cook and missionary worker.

The branding was partly inspired by the 1875 vaudeville/minstrel song ‘Old Aunt Jemima’.

The character, as it appeared in ads over time, was sometimes played by a white man in blackface appearing as a mammy caring for the children of white families.

Several black women also played the part, including Nancy Green in 1890. Anna Robinson and Anna Short Harrington are two of the most known for taking on the ‘iconic’ role.

Singer and songwriter Kirby was among those online that had called for a change to the Aunt Jemima brand. 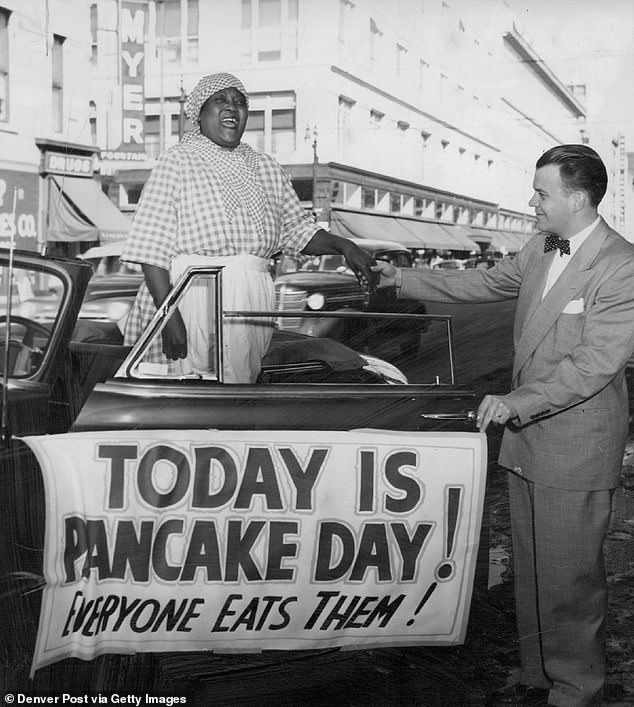 Many women have been tapped as Aunt Jemima over the years, with the first being Nancy Green in 1890, according to the pancake company’s website.

But Aunt Jemima traces its origins even earlier, starting with the 1875 vaudeville/minstrel song ‘Old Aunt Jemima’. The character was based off the racist stereotype of the mammie and was sometimes performed by a white man in blackface. A mammie (or mammy) was a black woman who cared for a white family and took care of their children.

Green was born a slave in Kentucky in the 1830s but would become known for her cooking. Green’s Aunt Jemima was so popular, she even prompted the brand to change its name.

After Green, multiple women were credited with putting Aunt Jemima on the map across the country.

Anna Robinson and Anna Short Harrington are just two of the women most known for taking on the ‘iconic’ role.

The Quaker Oats  filed its first registration of the Aunt Jemima trademark in 1937.

In 2015, a judge dismissed a case from two people claiming to be related to Harrington, who demanded that they be paid billions that they claimed the women were owed, according to the Wrap.

She posted on TikTok with a video of herself going to make breakfast, and explaining the racist origins of the pancake brand.’Did you know that the name Aunt Jemima means slave mammy of the plantation south?’, she asks.

She then dumps the pancake mix into her sink proclaiming: ‘Not today. Black Lives Matter.’

After Quaker announced the name change on Wednesday, calls grew for other manufacturers to take a look at their branding.

Mars has been urged to change the name of its Uncle Ben’s brand, which has depicted an elderly black man since it began in the 1940s.

The character, originally in bow tie, was based on a ‘legendary Texan farmer, Uncle Ben who was known for his exceptionally high quality rice, the brand says on its website.

Rapper Zuby was among online users who suggested the brand also be renamed after the Aunt Jemima announcement.

‘Uncle Ben is next…’ the artist tweeted, adding ‘fight that systematic oppression.’

Mars said it had ‘a responsibility to take a stand in helping to put an end to racial bias and injustices’ and that ‘one way we can do this is by evolving the Uncle Ben´s brand, including its visual brand identity.’

‘We don´t yet know what the exact changes or timing will be, but we are evaluating all possibilities,’ a spokeswoman said.

Some observers lauded the moves, but said they were slow to come.

‘Brands built on racist imagery have been living on borrowed time,’ said James O´Rourke, management professor at the University of Notre Dame´s Mendoza College of Business. ‘This move by Quaker Oats, while welcome, is decades late in coming.’

Quaker did not announce a new pancake-syrup name or logo, but said packages without the Aunt Jemima image would start appearing in the fourth quarter of 2020.

PepsiCo also announced on Tuesday a set of initiatives worth more than $400 million over five years to support black communities and boost black representation at PepsiCo.