Labour frontbencher Dawn Butler revealed that her uncle has died from coronavirus he contracted in a hospital as she demanded more tests for NHS staff today.

The shadow women and equalities minister shared a heart-rending message on Twitter this morning, revealing he had been admitted after suffering from a fall.

The Brent South MP, 50, said he has subsequently picked up the virus while being treated, with the bereavement coming weeks after the death of his son, her cousin.

It came as the Government was facing mounting criticism of the speed of its testing regime, with a fraction of NHS staff having been checked for coronavirus.

Announcing her news, Ms Butler said: ‘My uncle had a fall he didn’t have Covid-19.

‘He caught it in hospital and has now sadly died from Covid-19. 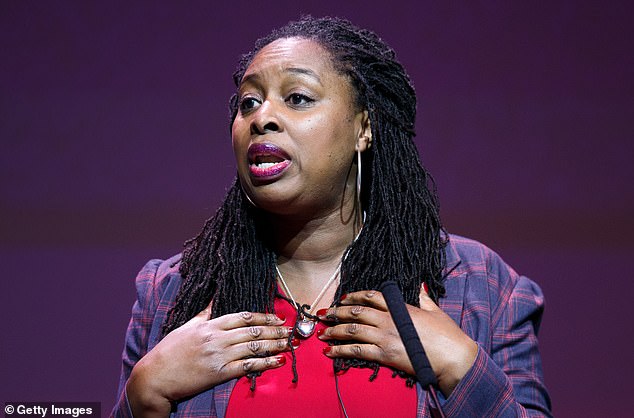 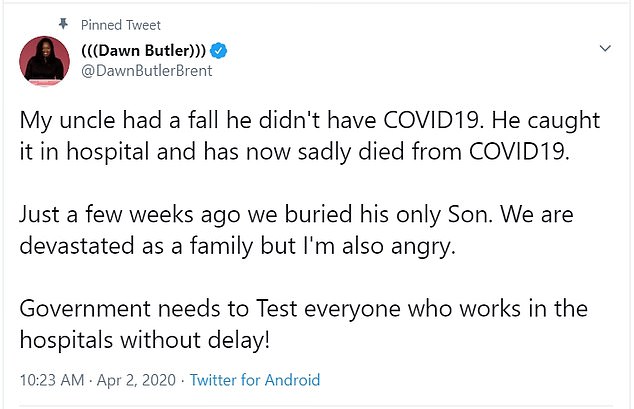 The shadow women and equalities minister shared a heart-rending message on Twitter this morning, revealing he had been admitted after suffering from a fall

‘Just a few weeks ago we buried his only son.

‘We are devastated as a family but I’m also angry. Government needs to test everyone who works in the hospitals without delay!’

It came as Boris Johnson faces demands to overrule control-freak health chiefs today amid warnings ‘time is running out’ to scale up coronavirus testing.

The institute today announced it has started testing NHS staff from University College London Hospitals and aims to ramp up to 500 per day by next week and expand to other hospitals in the capital.

Cancer Research UK said it is also providing testing kits and expert staff to ramp up testing for NHS staff across the country.

The private labs’ involvement come as the Government is facing bitter backlash over slow progress on increasing the number of people it is testing – Public Health England managed an average of just 7,994 tests per day in the last week but the number of tested people is lower because of repeat tests.

Will the Yellowstone 2 hour premiere reveal who attacked the Duttons?