The leader of the United Australia Party has accused a woman of assault after she smashed an egg on his head during a barbecue with the MP’s supporters at a Melbourne park.

Craig Kelly was talking with supporters at Fawkner Park in South Yarra on Friday afternoon when a woman approached him and cracked an egg on his head, and then threw another egg at him.

Footage of the incident has since been posted on the Twitter account of activist group Whistleblowers, Activists and Communities Alliance, an organisation formed in 2010 as the WikiLeaks Australian Citizens Alliance.

After the incident, Mr Kelly told The Age someone snuck up behind him and hit him on the back of the head. 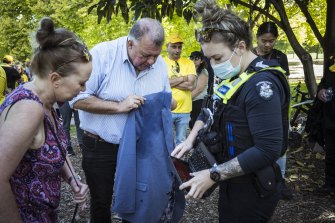 Craig Kelly shows a Victoria Police officer stains on his jacket after being egged in a Melbourne park on Friday.Credit:Chris Hopkins

“It’s an assault and we can’t have in our country members of Parliament, no matter if they disagree with my views, we can’t turn to violence,” he said.

“One day it’s an egg, the next day it’s a rock … that’s not how Australian democracy should work.

“I’ve had some run-ins with people dressed as dinosaurs over the years. 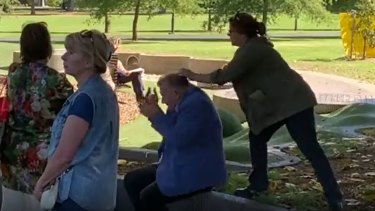 A woman smashes an egg on Craig Kelly’s head in a Melbourne park.Credit:Twitter

Police were called to the park and several officers took statements from witnesses.

A police spokesman said they were investigating reports a 58-year-old man was assaulted in South Yarra.

“It was understood two women were involved in an incident where eggs were smashed onto the man’s head at Fawkner Park about 1.25pm, before running to a vehicle which was believed to be waiting nearby.

“The man, from NSW, was not injured.“

Police said a man on a bicycle followed the women and parked his bike in front of their car.

But the driver of the car, a male, ran over the cyclist’s foot. He sustained minor injuries.

Police said the cyclist then followed the car, which stopped in nearby Toorak Road. The driver gave his details to the cyclist.

“The driver and two women then left the scene in the vehicle. Investigations into the identity of those involved remain ongoing,” a police spokesman said. 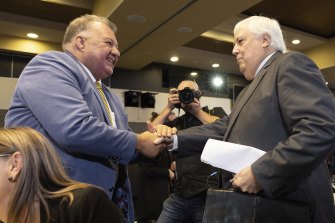 Craig Kelly shakes hands with Clive Palmer from the United Australia Party after his address to the National Press Club of Australia in Canberra on Thursday.Credit:Alex Ellinghausen

The event was billed as a “meet and greet BBQ and rally against government overreach”, where supporters could meet Mr Kelly and other UAP candidates.

Amid concerns about the safety of politicians, the Australian Federal Police last week announced it would set up a dedicated taskforce to protect MPs and candidates during the looming election campaign.

The taskforce will investigate election-related crime, including threats to politicians and candidates.

In 2019, Queensland senator Fraser Anning was egged by Melbourne teenager Will Connolly, then 17, who was handed an official caution from police.

The teenager egged Mr Anning at a far-right rally in Moorabbin the day after the Christchurch terror attack.

Anyone who witnessed the incident or with information is urged to contact Crime Stoppers on 1800 333 000 or make a confidential report at www.crimestoppersvic.com.au.

Jacqueline Maley cuts through the noise of the federal election campaign with news, views and expert analysis. Sign up to our Australia Votes 2022 newsletter here.

Get Great Lighting Like TikTok Star Charli D’Amelio – Here’s How!

The truth about Melania and Donald Trump’s marriage