The ‘bomb cyclone’, which struck on Tuesday, is the second spring snow blizzard to hit central US states in several weeks. The hazardous conditions caused the death of a man killed in a car crash with a snow plough in Colorado. More than 100 cars were involved in crashes in a whiteout in Minnesota, while nearly 1,000 flights were cancelled.

Accuweather has estimated the economic damage to be about £2.28bn ($3bn).

Now, forecasters are warning the monster storm is not done with the US just yet.

Further severe weather forecasts have been issued for central and southern states on Saturday and Sunday.

States covered by the various weather warnings for blizzards, high winds and winter storms include Minnesota, Nebraska, and North and South Dakota. 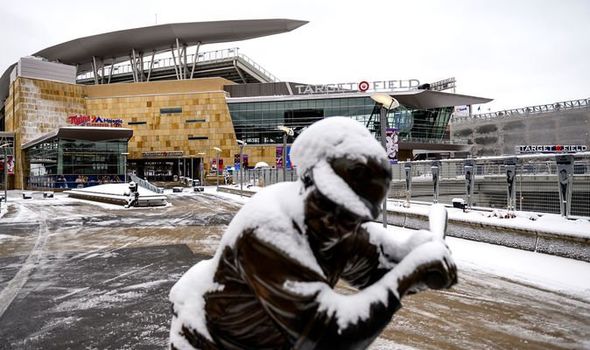 MyRadar Weather said two feet of snow had already fallen but the biggest risk this weekend could be “severe storms or isolated tornadoes”.

Leslie Hudson, meteorologist for MyRadar Weather said on Friday: “We’ve got blizzard warnings that have still been in issue, high wind warnings as well.

“There are storm warnings and then down towards the south, we’ve got frost and freeze advisories through the central plains.

“This blizzard has been quite a mess and now we’re going to be watching severe weather threats as we head towards the weekend. 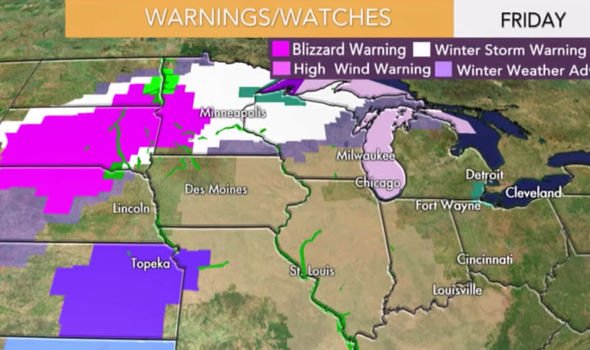 “Still going to have some snow through the northern plains, you can see our squall line here through the midwest, freezing rain up in Canada as we put it into motion.

But weather forecaster warned of a deepening band of low pressure to the north, affecting Minnesota and the northern plains with a “long tail” down into Texas.

She added: “And by the way, we’re going to be watching that area for severe weather as we head into Saturday.” 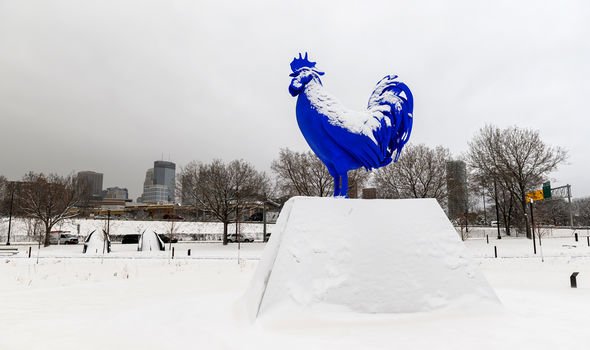 Ms Hudson said the band of low pressure was moving north bringing some freezing conditions and isolated storms for the east coast into Saturday.

But she added the “potentially real serious situation” was in the southern states, particularly Texas.

The Storm Prediction Centre has issued an “enchanted risk” for severe storms for two million people on Saturday.

Some 19 million people fall under a “slight risk” warning.

Stark family tree REVEALED: How Arya, Sansa and Bran are all linked to the Targaryens