Victoria has recorded 1273 new COVID-19 cases on Friday and eight deaths as the state’s vaccinated residents wake to a further easing of coronavirus restrictions that will take them significantly closer to life before the pandemic.

From today, a Victorian’s vaccination status will determine what they can do after Premier Daniel Andrews revealed a raft of new freedoms – including the removal of most mask, home visitor, and density restrictions – for residents who have had two doses of coronavirus vaccine.

As the state prepared to hit the 90 per cent double-vaccinated milestone, the government also confirmed the Boxing Day Test and the Australian Open will operate at full capacity.

Masks will no longer be required at work or in restaurants and there will be no limits on the number of guests allowed in a private home. The government will also stop publishing COVID-19 exposure sites.

On Friday morning, Mr Andrews said he expected the state would cross the 90 per cent vaccination mark on the weekend.

“There is a real sense of excitement across Victoria, that Victorians have done an amazing thing,” Mr Andrews told the Seven Network.

“Whether it is 100,000 people at the Boxing Day test at the MCG, or 1 million people who go to the tennis, or being able to visit family and friends without limits and rules, or stand up and have a beer at the pub, this is a fantastic day.”

Masks will still be needed in places such as hospitals and aged care.

The lifting of restrictions comes against a backdrop of continuing political turmoil over the government’s proposed pandemic legislation.

The state’s upper house will sit again on Friday to consider the legislation with the government battling to secure enough votes from the crossbench for its passage at the same time as a small protest continues on the steps of state parliament.

“We have never had a majority, never had the numbers, as of right now in the upper house,” Mr Andrews said on Friday.

“We work with everybody [on the crossbench]. That is what will do here, and we’ll see what the outcome is. We will do the hard work to get an outcome.”

He also took aim again at the behaviour of some protesters who have called for him to be killed and paraded gallows outside of parliament.

“Debate is not unhealthy, but violence is,” Mr Andrews said.

Shadow Treasurer David Davis said the government had made no effort to negotiate with the opposition on amendments to the legislation which gave too much power to the government and lacked transparency.

Prime Minister Scott Morrison said on Thursday he did not support Liberal Party MPs attending the protests which Mr Davis addressed last week. Other opposition MPs mingled with protesters after the appearance of gallows.

“People are entitled to do their democratic protests and make their views known they should do so peacefully and respectfully. If people are going over the top in these sorts of ways, I think that’s quite wrong and I think we should call it out as such,” he told the ABC.

Asked about his colleagues who had appeared with the protesters in recent days and whether the opposition’s rhetoric had contributed to the intensity of the atmosphere, Mr Davis said: “People are worried about greater power for government without checks and balances. There is a mistrust of Daniel Andrews, there is a mistrust of his government.

“They have misused the powers that they’ve had. So then when he says ‘I want more powers, I want greater powers. I want unchecked powers’, people say ’no, that’s that’s wrong, our democracy is too important, too precious, we want the parliament asserting itself saying, ‘no, we’re actually going to take back the control from Daniel Andrews and we’re going to put him on a very short leash because he can’t be left in the position where he can exercise these powers and be trusted to do so’.”

Changes to isolation rules mean most people who come into contact with a COVID-19 case in the community will have to isolate only until they test negative. 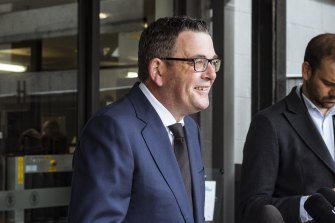 Premier Daniel Andrews yesterday tweeted that it was time to “hit the dance floor”.Credit:Chris Hopkins

That means those exposed to a case in an office, restaurant or bar, will not automatically have to quarantine. However, the Health Department can still impose quarantine periods on a case-by-case basis if it is considered necessary.

Cases and contacts who already had quarantine requirements in place before Friday will be able to follow the new rules.

People who test positive to COVID-19 will now be required to isolate for 10 days instead of 14, and will be asked to contact the people they saw in the lead-up to their diagnosis and encourage them to get tested. However, the Health Department will no longer trace and manage those contacts.

Those who test positive to COVID-19 will be required to notify their workplace, school or childcare centre, and workplaces will be responsible for contacting other employees, but not customers, who may have been exposed.

Fully vaccinated household contacts will have to isolate for seven days instead of 14.

A child aged under 12 who is ineligible for the vaccine is considered fully vaccinated if all the people in their household aged over 12 have had two doses of the vaccine.

The new rules will also apply to COVID-positive Victorians and their close contacts who were already in quarantine before they come into effect.

There were 330 people in hospital with the virus, and 57 in intensive care. Fifty-eight people in ICU were cleared of COVID-19.

Official government modelling by the Burnet Institute, released on October 17, suggested cases might begin to rise from mid-November due to eased restrictions with a high peak at Christmas that could overwhelm the healthcare system.

Another 5842 Victorians rolled up their sleeves to receive a dose of a COVID-19 vaccine at a state-run clinic on Thursday. Of the state’s population over the age of 12, 88 per cent are now double-dosed.

The figures come as about two dozen demonstrators spent a fifth night on the steps of Victorian Parliament protesting the pandemic bill, with the Andrews government and crossbench MPs it had previously sidelined in last-minute negotiations over the proposed legislation.

After former minister Adem Somyurek threatened to tip the vote against his old party, Labor was forced to delay debate in the Legislative Council yesterday afternoon.

A government source, who told The Age on the condition of anonymity, said delicate negotiations to resolve the stalemate were continuing late into the night. The bill could return to the upper house as soon as today, the source said.

We’re calling it, this is the top style everyone is loving right now

‘Fallout 76’ Announced By Bethesda After 24 Hours Of Teasing, May Be Online Title