Valneva Covid vaccine trial volunteers are ‘left in the lurch’ and fear they need another jab after No10 ended £1.2bn deal with French pharmaceutical giant

Volunteers given Valneva’s experimental Covid vaccine say they feel ‘left in the lurch’ following No10’s decision to cancel a deal to buy the firm’s jab.

More than 4,000 Brits received two doses of the company’s candidate in a trial that began last year with the goal of finding a way out of the pandemic.

But the Government this week cancelled its £1.2billion deal to buy up to 190million doses of the jab from the French pharmaceutical firm.

Health Secretary Sajid Javid claimed this week the vaccine ‘would not have got approval’ from medical regulators, although he did not explain why.

Participants who took part in the research say they had heard nothing from Valneva despite the contract cancellation until today. Some fear they may need another vaccine to ensure they have the best level of protection. 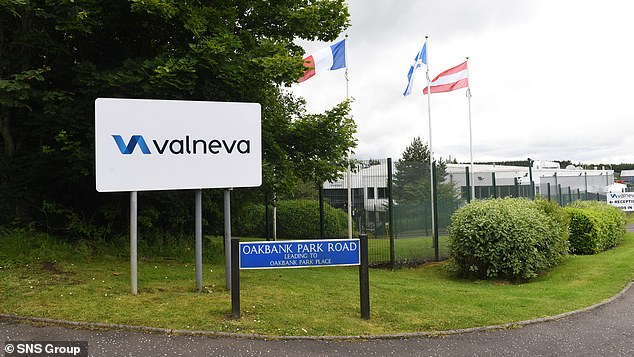 The Biotech company has been manufacturing the vaccine at its plant in Livingston, West Lothian, (pictured) and was planning on expanding the plant with 200 new jobs 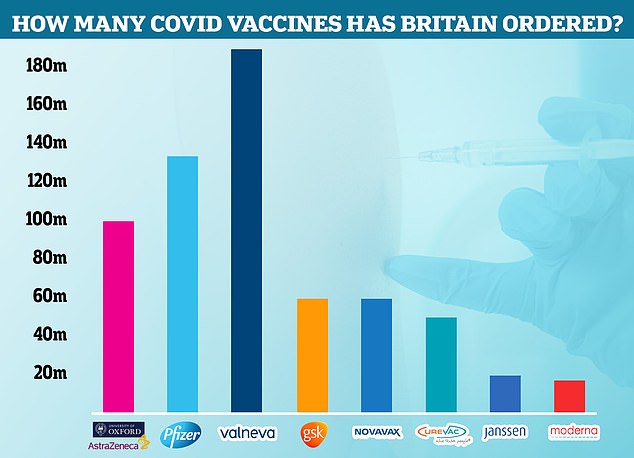 The Government cancelled its contract with Valneva for up to 190million Covid vaccines. Some 100million had already been ordered for delivery in 2021 and 2022 and the UK had the option of requesting an additional 90million that would be delivered between 2023 and 2025. Now the agreement has been terminated, Pfizer is the most-ordered jab in the UK, with 135million due to arrive in Britain by next year. Some 100million doses of AstraZeneca have been ordered, along with 60million doses each of the jabs made by GSK and Novavax. Meanwhile, the Government has requested 50million CureVac vaccines, 20million Janssen and 17million Moderna injections

Valneva has reported the phase 1/2 clinical trial results for its coronavirus vaccine.

They involved 153 British volunteers aged between 18 and 55, who received either a low, medium or high dose of the jab given three weeks apart.

Participants were asked to report any side-effects, and had their blood tested for Covid antibodies two weeks after getting their second dose.

Does the jab trigger Covid-fighting antibodies?

Results showed everyone who received a high dose of the jab had Covid antibodies in their blood stream.

But only 89.9 per cent had them in the medium dosing group. No figure was given for those that received the low dose.

The French pharmaceutical giant said it would be advancing the high dose to phase 3 clinical trials.

No safety concerns were raised during phase 1/2, clinical trials scientists said, paving the way for it to be advanced to the next stage.

Two volunteers said they had suffered a headache or fatigue after the jabs, but these symptoms are also triggered by other vaccines already approved for use in the UK.

How does the vaccine work?

The vaccine is the only one being developed in Europe to use an inactivated whole Covid virus to trigger an immune response.

When it is injected the body attacks the spike proteins on the virus – which it uses to invade cells – by making antibodies that can bind to them, stopping an infection from happening.

The virus is killed before it is injected using chemicals, heat or radiation, meaning there is no risk of it triggering an infection.

This type of vaccine is already used to protect against polio and flu.

What is the next stage for the vaccine?

A phase 3 trial was launched in the UK last month, which involves giving over 4,000 older Britons a high dose of the vaccine.

Results from this trial and approval in the UK are expected by the end of the year, the company said.

The injection was also one of the seven Covid vaccines included in the Cov-Boost trial.

The study, led by researchers at University Hospital Southampton NHS Foundation Trust, aims to determine which jab is the most effective for booster doses.

What was Valneva’s agreement with the UK?

The UK ordered 100million doses from the French vaccine-maker to be delivered in 2021 and 2022.

The contract also allowed the UK to order an additional 90million jabs between 2023 and 2025.

But Valneva announced today that the Government terminated the contract, claiming the company breached its obligations.

One trial volunteer who wanted to remain anonymous told MailOnline: ‘I feel left in the lurch. I have heard virtually nothing from Valneva.

‘I found out the UK Government had cancelled their contract online, and they only bothered to contact me today to say the trial was still going ahead.

‘Do I get a third shot because I am on this trial? Nobody has told me.’

The volunteer added that they have been unable to go abroad this summer because other countries don’t see them as being double-vaccinated against the virus.

Valneva wrote to its volunteers today —  four days after the UK cancelled its order — to say that its trial was continuing, and that it expected to be able to release the full results later this year.

Some 100million doses of the vaccine were put on order after the UK increased its request by 40million back in February. The Government had the option of ordering an additional 90million doses to be supplied between 2023 and 2025.

Speaking in the Commons on Wednesday, Mr Javid said: ‘There are commercial reasons that we have cancelled the contract.

‘But what I can tell is that it was also clear to us that the vaccine in question that the company was developing would not get approval by the MHRA [Britain’s medical regulator].’

The EU is reportedly negotiating to purchase Britain’s doses of Valneva for a booster programme in the bloc.

Several country’s in the bloc — including Austria and Belgium — have said they will offer third shots.

Volunteers were given two doses of either Valneva’s vaccine or the AstraZeneca jab in trials, with a gap of three to five weeks between each dose.

The participant who spoke to MailOnline said they had a slight fever and a headache after getting their second dose. They said they have been told by Valneva that they received the experimental vaccine.

They added that they had Covid symptoms back in April last year, but that they were not tested for the virus because so few were available.

Valneva’s vaccine is currently in phase three trials, with results due in the fourth quarter.

The jab is unique among Covid vaccines.

Unlike other shots, which use genetic fragments of the Covid virus, the Valneva jab contains the whole, inactivated virus, much like flu and hepatitis A vaccines.

As it has more parts of the virus for the immune system to learn from, experts hope it will be more variant-proof than the others.

The Department of Health and Valneva have not responded to a MailOnline request for comment.

Both Britain’s medical regulator the MHRA and NHS England insisted it was for the Department of Health to comment.

In a statement when the contract was cancelled on Monday, the firm said: ‘Valneva SE, a specialty vaccine company, today announced it has received a termination notice from the UK Government (HMG) in relation to the Supply Agreement for its Covid vaccine candidate, VLA2001.

‘The contract provides HMG with the right to terminate.

‘HMG has alleged the company is in breach of its obligations under the supply agreement, but the company strenuously denies this.’

Neither party explained the nature of the breach.

‘Subject to these data and MHRA (Medicines and Healthcare products Regulatory Agency) approval, Valneva believes that initial approval for VLA2001 could be granted in late 2021’, the company added.

‘Valneva has worked tirelessly, and to its best efforts, on the collaboration with HMG including investing significant resources and effort to respond to HMG’s requests for variant-derived vaccines.

‘Valneva continues to be committed to the development of VLA2001 and will increase its efforts with other potential customers to ensure that its inactivated vaccine can be used in the fight against the pandemic.’

These Colored Engagement Rings Will Make You Forget All About Diamonds