Home » World News » Vegan, pay-what-you-feel restaurant chain Lentil as Anything on the brink

For two decades, social enterprise Lentil As Anything has fed the disadvantaged and let customers pay whatever they feel a meal is worth. It’s been a lifeline for many during the pandemic.

But its social purpose has been undermined by mismanagement, board upheaval and regulatory action from both the Fair Work Ombudsman for wage underpayment and the Australian Tax Office for a large unpaid superannuation bill. 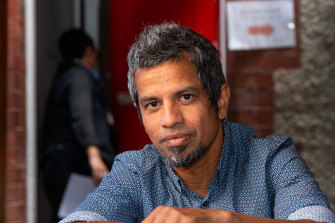 Lentil As Anything founder Shanaka Fernando was not available for interview this weekCredit: Simon Schluter

On top of that it had left a trail of unpaid taxes and creditors. Last year it was on the brink of insolvency before it was bailed out by a GoFundMe campaign. Some detail around that raised questions about whether the social enterprise misled supporters about the nature of its financial difficulties.

Lentil as Anything’s high-profile founder, Shanaka Fernando, was unavailable for interview this week to discuss what had gone on at the organisation he founded and its restaurants in Abbotsford, St Kilda, Thornbury and Newtown in Sydney.

Fernando quit the board late last year – leaving new chair Megan Evans at one stage as its only board member – before he recently re-joined.

Ms Evans admitted there had been problems in the organisation, and she was still trying to piece together what had happened, but she insisted she was working on fixing them. “It’s been a very awful, tricky situation,” she said, including a “lack of expertise or capacity to meet regulatory deadlines”. 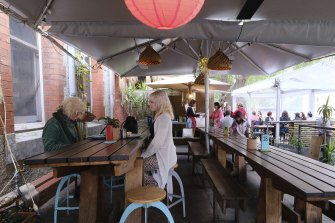 But she was adamant Lentil as Anything and its social purpose must work. “If we had an economics of compassion, imagine what the world would be like,” Ms Evans said. “If we are not a role model for other businesses then what am I doing?”

Despite its altruistic purpose, Lentil as Anything is no small operation, turning over more than $3 million a year even though the average price a customer pays is about $4.50 a meal.

The group provides meals for the homeless, and gives work and other opportunities to the disadvantaged. During the pandemic it delivered more than 1000 free meals a week to those in need.

Yet, its financial accounts from recent years make for grim reading. It owed staff at least $155,000 in unpaid superannuation and was under investigation by the Ombudsman for an unspecified amount of wage underpayment. The Ombudsman said its investigation had now been finalised. 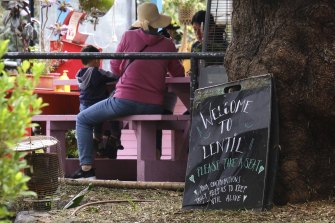 The restaurant chain is working to stay open.Credit:Luis Enrique Ascui

The restaurant chain’s position has since improved after it raised $373,000 last year as part of a GoFundMe campaign. Its GoFundMe pitch claimed that before the pandemic it had been “self-sustainable” and able to fund its social projects through its own cashflow, but that “COVID-19 threw a spanner in our organisational model”.

But its own financial accounts tell a different story. It was already on the brink of insolvency and under multiple regulatory investigations nearly a year before the pandemic hit.

When asked if it had misled its supporters in the GoFundMe campaign, Ms Evans – who was not on the board at the time – said it was staff who took the lead on the fundraiser, not the board. The GoFundMe fundraiser was in the name of Lentil as Anything and the proceeds went to it.

Ms Evans said Lentil as Anything was now addressing how it communicated and how it was run. “Our project is a kind of social experiment, really,” she said, relying on social trust and the need to “ensure there’s no exploitation of that generosity” whether of volunteers or supporters.

She has welcomed the scrutiny from regulators. “I don’t believe they are institutions that have any intent to put people out of business … I actually look forward to their help.”

The enterprise is staffed by volunteers – who can receive a stipend – and paid staff, who were short-changed because they were paid under the wrong workplace award, Ms Evans said. They’ve now paid “back every dollar”, she said.

Despite the significant reduction in debt after the fundraiser, Lentil as Anything is not in the clear yet. It needs more volunteers and support.

Do you know more? Send a confidential message to [email protected]

So Cute! Zendaya Reveals What She Loves Most About Tom Holland Amid Romance