Christchurch: Relatives and victims of the Christchurch mosque shooting and supporters are gathering outside court in Christchurch, hugging, singing and exchanging flowers.

After three days of hearing and dozens of harrowing victim accounts being heard in court, Australian Brenton Tarrant, 29, will be sentenced this afternoon. 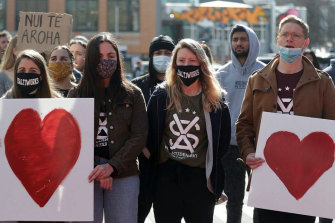 A guitarist playing outside while some victims watched from the windows above.

“After the attack, there was a massive outpouring of grief, beds of flowers,” Johnson said.

“Now [the victims] have shown such amazing stoicism. So last night they put a call out for people to gather and ‘do something nice’.”

One of the shooting victims, Wasseim Alsati, went out to acknowledge the supporters. “Love you all!” he shouted. 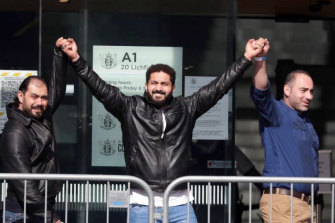 Ahead of sentencing, Prime Minister Jacinda Ardern called on New Zealanders to “continue to show all of the empathy and solace that our Muslim community deserve”.

Nothing would “remove what happened that day,” she said.

Stuff understands at least three victims who had hoped to be at the sentencing were stuck in isolation.

Sazada Akhter’s husband Mohammed Mashud made his way home from Bangladesh to be there for his wife, who was left in a wheelchair as a result of her injuries, only to be kept in isolation due to a positive COVID-19 test from another person at the isolation hotel.

Akhter was supported by Raf Manji and other victims in court instead.

The gunman is being held at the Justice and Emergency Services Precinct where he can be escorted from a cell below ground to the courtroom, rather than having to be transported between the court and Christchurch Men’s Prison every day.

His cell is understood to have been fitted with special screens on the outside to prevent people using the lift to the High Court from seeing him.

Canterbury district commander Superintendent John Price previously said there would be a heightened police presence in the city prior to and during the sentencing. 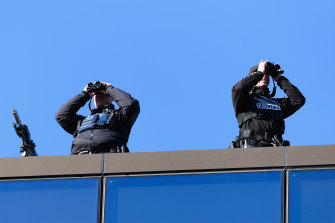 Police snipers are seen on the roof of Christchurch High Court prior to the sentencing of Brenton Tarrant on Thursday.Credit:Getty Images

Fifty-one people were killed in the terrorist attack on two Christchurch mosques on March 15, 2019.

It’s understood police have visited a number of high-risk individuals, some with known ties to white supremacy, in the city and other parts of the country in recent weeks. They’ve been closely monitoring discussions on online forums and message boards.

She advised those feeling distressed to limit their exposure to social media, reflect on what they were grateful for and do things that made them feel good.

“We encourage people to be mindful of how the coverage might impact on people, especially children, and be prepared to limit their media consumption if it begins to feel overwhelming,” she said.

Tarrant who killed 51 Muslim worshippers last year in New Zealand's deadliest shooting will be sentenced after three days of emotionally charged statements from his victims in court. 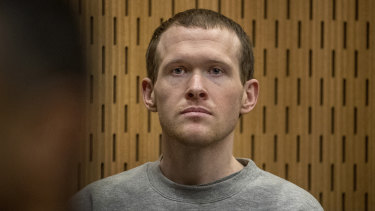 Australian Brenton Harrison Tarrant stands in the dock at the Christchurch High Court.Credit:AP

The white supremacist told the court on Wednesday that he would not speak ahead of Justice Cameron Mander handing down his sentence, but would instead make a comment through a court-appointed lawyer.

The decision eased some concerns that Tarrant, who had elected to defend himself, would use his submission in court to talk about his extremist ideology.

The 29-year-old Australian initially pleaded not guilty to all charges against him but later admitted to 51 charges of murder, 40 counts of attempted murder and one charge of committing a terrorist act during the 2019 shooting rampage at two Christchurch mosques which he livestreamed on Facebook.

A murder conviction carries a mandatory sentence of life in prison. The judge can impose a life term without parole, a sentence that has never been used in New Zealand.

Tarrant was largely emotionless through the last three days as more than 90 victims gave harrowing accounts of the attack and its traumatic impact on their lives.

Prosecutors have told the court that Tarrant wanted to instil fear in those he described as invaders and that he carefully planned the attacks to cause maximum carnage.

What Was Really Happening on RHONY's Boat Ride From Hell?