Victoria has recorded 1841 new cases of coronavirus and 12 deaths as Melbourne prepares to emerge from lockdown.

There were 38,881 doses of the COVID-19 vaccine delivered in state hubs on Tuesday, while 78,928 tests were completed. 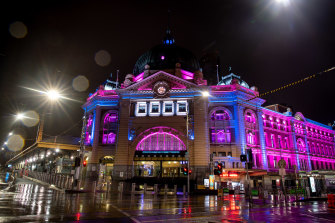 The night curfew will be one of the restrictions scrapped when Melbourne begins to reopen at 11.59pm on Thursday.Credit:Eddie Jim

The state is expected to hit the 70 per cent double-vaccination target by the end of Wednesday, but it won’t be reflected in the official data until Thursday.

As a result, Melbourne will start to emerge from the city’s sixth lockdown at 11.59pm on Thursday. Ten people will be allowed in private homes, up to 20 patrons permitted to dine indoors, the travel limit will be scrapped within metropolitan Melbourne and the controversial curfew will end.

But bar and restaurant owners have been left puzzled and angry after the Victorian government issued a last-minute clarification that all hospitality staff must be fully vaccinated before venues can reopen from Friday.

Premier Daniel Andrews confirmed on Tuesday that cooks, waiters and other hospitality staff must have had two doses of a COVID-19 vaccine to go to work under the road map announced on Sunday, after contradictory information was provided by the Department of Justice and Community Safety.

Industry bodies told The Age they had been advised, incorrectly, earlier in the day that staff would only need to have had one dose by Friday and their second shot booked in before November 26, in line with the government’s vaccine mandate for authorised workers.

The state government on Tuesday night also announced a major softening of its border with NSW.

Quarantine and testing requirements have been lifted for fully vaccinated travellers from NSW, with health authorities downgrading Greater Sydney and other parts of the state from red to orange zones from Wednesday.

Meanwhile, The Age on Wednesday revealed that Victoria will trial home quarantine for international travellers next week as it joins NSW in dismantling the nation’s “Fortress Australia” response to the pandemic.

Passengers booked on a special flight from London to Melbourne arriving at Tullamarine on October 27 will be allowed to isolate at home for seven days instead of being locked in a hotel room for a fortnight.

It follows NSW’s announcement that from November 1, international travellers can arrive in Sydney without having to quarantine.

Why does Cain hate Faith in Emmerdale?