The inquiry probing Victoria's hotel quarantine program has almost two months of additional time to hand down its final report, which will now be delivered just days before Christmas.

An interim report will be handed to the government on November 6, which was the original date for the completion of the final report. 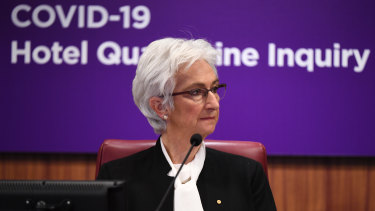 The inquiry said it would now deliver a final report with a full set of recommendations and findings on December 21.

The interim report will contain recommendations on a proposed new quarantine program, potentially paving the way for international travellers to begin arriving in Victoria.

Head of the inquiry, former judge Jennifer Coate, warned a delay would occur when new information continued to come to light even after the hearings completed last month.

The new evidence went to the problematic question of who made the decision to use private security over police or the Australian Defence Force to patrol the hotels.

"Several documents and affidavits are presently outstanding and may lead to further enquiries," Thursday's statement from the inquiry said.

The Premier granted an extension of time on Thursday after Justice Coate wrote to Mr Andrews on Wednesday saying the inquiry needed more time.

When asked by The Age about the delay on Thursday, Opposition Leader Michael O’Brien said he was "far more interested in the hotel quarantine inquiry finding us the truth about what went wrong than … meeting an arbitrary reporting deadline".

The inquiry heard that 99 per cent of Victoria's devastating second wave of coronavirus could be traced back to two hotels set up to quarantine international arrivals, where private security guards became infected before spreading the virus into the community.

Kevin Clifton: Strictly pro reveals what bosses ‘didn’t like’ about him as he talks exit

Scott Disick and Sofia Richie Have Been Texting and There's a Good Chance They'll Get Back Together, Source Says