Victoria’s triple-zero agency has suffered from chronic staff shortages leading to major connection delays as recently as in the past fortnight, and Deputy Premier James Merlino has moved to assure the public the government is acting to fix the strained emergency call system.

Amid fallout from an Age report on Preston father of three Nick Panagiotopoulos, who died in October after waiting 25 minutes for an ambulance to arrive, Inspector-General for Emergency Management Tony Pearce announced he was conducting a major review into the failings of the triple-zero system. 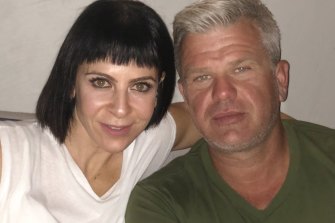 Nick Panagiotopoulos and his wife Belinda.

Mr Pearce said he would report his findings to Emergency Services Minister Jaclyn Symes and State Coroner John Cain next year, although he could not guarantee they would be made public. Judge Cain has already been briefed by Mr Pearce and Emergency Services Telecommunications Authority (ESTA) interim chief executive Stephen Leane and will consider holding a coronial inquiry into deaths linked to call delays.

On Wednesday, Ms Symes contacted Mr Panagiotopoulos’ widow, Bel, offering her condolences and committing to reforming the system. In a statement, Ms Symes said the Inspector-General’s inquiry and a coronial inquiry meant it would be inappropriate to comment on the specifics of the death, although sources said the minister had deep concerns about the authority’s failings.

Mr Pearce said his review would examine the delays in call answering and the “potential adverse events” that resulted. “All cases that are identified as being adverse events will be thoroughly analysed” to work out what had gone wrong and to suggest improvements, he said.

The review comes after unions expressed concerns that the authority was chronically understaffed. The government announced the hiring of 43 extra staff, funded in the state budget, who are being trained. Mr Merlino said some had started work already and others would begin taking triple-zero calls next month.

However, over the last fortnight, paramedics and other emergency agency staff who deal with the authority described encountering significant delays with triple-zero calls being answered.

A senior paramedic of 20 years based in a regional area, who was not authorised to speak publicly, said he had noticed significant problems at the triple-zero agency since the beginning of the year, while an insider at the authority said stress leave and WorkCover cases had debilitated its workforce.

“A lot of us would like to be proud of what we do and who we work for, but when you’re turning up to places and [patients] say we have been calling and calling and calling … you feel like a dickhead to be honest,” the paramedic said. “You’re trying to organise everything like emotions and logistics of clinical [care] and step by step, what we are going to do next … It just seems to be getting chronically worse and worse.”

Mr Leane apologised “to anyone who has had to wait for their call to be answered”, saying any delays in answering emergency calls were unacceptable.

“Our triple-zero operators care deeply about the service they provide and the community they serve … We are investigating ways to improve the call process,” he said.

Victorian Ambulance Union general secretary Danny Hill said that at one point on Tuesday night there were just nine people answering calls to dispatch ambulances for all of Victoria, with staffing levels he described as well below safe standards. ESTA insists the number of triple-zero call-takers has not dropped below 21 over the past fortnight, although it did not clarify how many were dedicated to ambulance dispatch.

“I have no doubt there’ll be further examples.”

He said gaps in the system became clear at least as early as May, but planning for the COVID-19 peak, expected this month, only seemed to be starting now.

The Age detailed on Tuesday the case of Mr Panagiotopoulos, whose family waited for the triple-zero service for 15 minutes in an urgent call that should have been answered in five seconds.

Deputy Premier James Merlino said on Wednesday that Mr Panagiotopoulos’ death was a tragic and deeply upsetting case that was unacceptable.

“There are no words that I can say to this family or any other family that have lost a loved one,” Mr Merlino said. “I think it’s important the government acts, and that’s exactly what we’ve done.”

However, dozens of Victorians contacted The Age on Wednesday to describe triple-zero call delays that had affected loved ones, including potentially leading to avoidable deaths.

Lara man David Withington said he was worried several weeks ago that his wife of almost 50 years was about to die after he spent more than half an hour on hold with the authority. 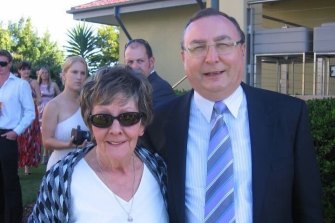 Lara couple David Withington and his wife Noela, who waited on hold triple zero several weeks ago after Noela began bleeding from a leg injury.

His wife, Noela, 77, had hit her lower leg on a chair, and it had begun to swell. As the former nurse’s leg turned black, Mr Withington called triple zero, only for the call to drop out after eight minutes.

He called again. As he did so, his wife’s leg burst and began bleeding all over the bedroom carpet.

“It frightened the hell out of us,” he said. “I rushed out of the room to get some towels and got her to try and keep a hand on it to try and stop bleeding, but it just kept flowing.”

With the sound of an operator in the background trying to connect him to the triple-zero call centre so he could request an ambulance, the couple said their goodbyes.

“Noela couldn’t hang on any more, and then she just sagged and collapsed on top of the bed, and I thought, she’s just lost too much blood, she’s not going to make it,” Mr Withington told The Age.

“I just said I was so sorry I couldn’t help her. We both said, goodbye, love you and goodbye.”

When he was able to get through to request an ambulance, it arrived quickly at their Lara home, and she was taken to hospital and survived.

Mr Withington said the traumatic incident represented a “complete failure of the system”.

“With all the modern technology available these days, it’s unbelievable we can’t provide such a basic service. It certainly damaged us, and it’s clearly hurting a lot of people,” he said.

“I no longer go around with the confidence that if we need an ambulance … we will be able to contact one. That is an awful feeling to have with you all the time, particularly as you get older and you’re dealing with health issues more regularly. It’s quite disgraceful.”

“The tragedy that struck the Panagiotopoulos family should not happen to any family and I offer them my deepest condolences.

“As has been publicly reported, I have previously sought assurances from the Victorian government that they are addressing the problems … These are life-and-death issues that must be addressed as a matter of urgency”.

He said delays in Victoria were “causing flow-on effects in other triple-zero call centres and affecting Australians in other states.”

An average of 87.7 per cent of emergency ambulance calls in 2020-21 were answered within five seconds after demand jumped almost 15 per cent.

Sue Riley of the Communications Workers Union, whose members are mostly police call-takers, said long-term planning was needed to fill a worker shortage at ESTA with a six-month lead time for new hires.

She said the ambulance unions had been calling for more hires for seven or more years.

“ESTA should have planned for this,” Ms Riley said. “It’s no surprise they’re in a crisis.”

She said hard-working ambulance call-takers were “getting smashed” and that they were so stretched they had been blocked from accessing their annual leave.

Screaming and sobbing fans line up to meet Harry and Meghan