Victoria has recorded 1965 local cases and five deaths from coronavirus on Saturday, as the Commonwealth government prepares to fly in health workers from overseas to ease a healthcare staffing crisis.

There were 41,177 vaccination doses administered on Friday and more than 73,400 test results were returned. Victoria now has 17,199 active cases of the virus, following the record high daily case load recorded on Saturday. 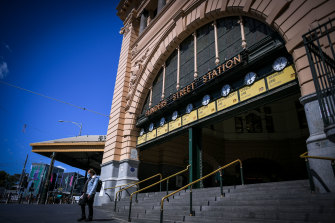 Melbourne CBD is pictured deep in its sixth lockdown this week.Credit:Eddie Jim

Australia will allow 2000 overseas nurses and doctors to enter the country for work under a plan being finalised by the federal and state governments.

The health system reinforcements will be flown in over the next six months and predominantly dispatched to outer suburban and regional hospitals and GP clinics.

“This will be a one-off boost to provide additional support,” Health Minister Greg Hunt told The Age and The Sydney Morning Herald. “The Commonwealth is committed to it and the states are working constructively with us on it.”

Two childcare centres in Melbourne’s outer suburbs were identified as exposure sites overnight, forcing children and staff into two weeks of isolation, with a regional cinema screening also identified as a site of potential COVID-19 exposure.

Child’s Play Early Learning Centre in Tarneit, around 25 kilometres west of Melbourne’s CBD, was labelled a tier-1 exposure after a positive case visited on September 30, and again on October 4 and 5.

An October 1 screening of horror film ‘Don’t Breathe 2’ has also been listed as a tier-1 exposure site at Showbiz Cinemas in Ballarat.

The Victorian city of Mildura, which sits on the Victoria-NSW border, entered a seven-day lockdown at 11.59pm on Friday night after a spike in COVID-19 cases.

Nine active cases were recorded in the city on Friday, with three of these cases included in Saturday’s count. Mildura will face the same restrictions as those in metropolitan Melbourne, excluding the curfew.

Black Friday Spa Day Deals on Wowcher from £24 per person

Taylor Swift Is Catching Up On This While Social Distancing