Viktor Orban claims victory in Hungarian elections: Populist Prime Minister says win is so big ‘you can see it from the moon’ after refusing to condemn Putin and slamming Zelensky

Populist Prime Minister Viktor Orban has claimed victory in Hungary’s elections saying his win is so big ‘you can see it from the moon’.

A partial vote count has predicted a strong lead for Orban’s Fidesz party, which would give him a mandate for a fourth term.

In a ten minute speech to party officials and supporters at an election night event in Budapest, Orban addressed a crowd cheering ‘Viktor!’ and declared it was a ‘huge victory’ for his party.

‘We won a victory so big that you can see it from the moon, and you can certainly see it from Brussels,’ said Orban, who has often been condemned by the European Union for democratic backsliding and alleged corruption.

‘The whole world has seen tonight in Budapest that Christian democratic politics, conservative civic politics and patriotic politics have won.

‘We are telling Europe that this is not the past, this is the future.’ 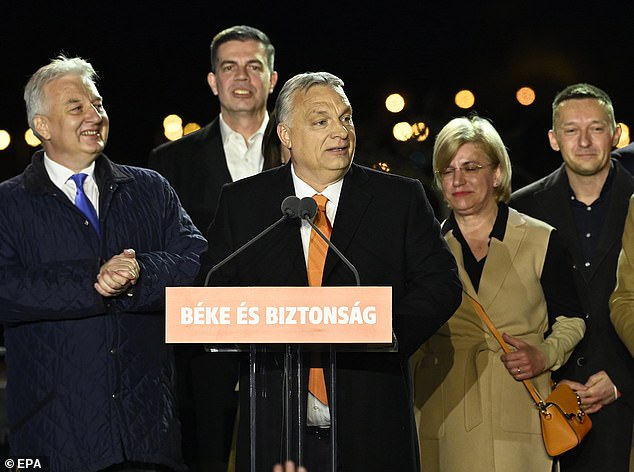 While votes were still being tallied, it appeared clear that the question was not whether Orban’s Fidesz party would take the election, but by how much.

With 75 per cent of votes tallied, Orban’s Fidesz-led coalition had won 54.5 per cent, while a pro-European opposition coalition, United for Hungary, had nearly 34 per cent, according to the National Election Office.

It appeared possible that Fidesz would win another constitutional majority, allowing it to keep making deep changes to the Central European nation.

As Fidesz party officials gathered at an election night event on the Danube river in Budapest, state secretary Zoltan Kovacs said the participation of so many parties in the election showed the strength of Hungary’s democracy.

‘We have heard a lot of nonsense recently about whether there is democracy in Hungary,’ Kovacs said. ‘Hungarian democracy in the last 12 years has not weakened, but has been strengthened.’

The contest was expected to be the closest since Orban took power in 2010, thanks to Hungary’s six main opposition parties putting aside their ideological differences to form a united front against Fidesz.

Voters were electing lawmakers to the country’s 199-seat parliament.

Yet even in his home district, opposition leader Peter Marki-Zay trailed the longtime Fidesz incumbent Janos Lazar by more than 11 points, with 74 per cent of the votes counted there.

It was a discouraging sign for the prime ministerial candidate who had promised to end to what he alleges is rampant government corruption and also raise living standards by increasing funding to Hungary’s ailing health care and schools.

In a surprise performance, radical right-wing party Our Homeland Movement appeared to have garnered more than 6 per cent of the vote, exceeding the 5 per cent threshold needed to gain seats in parliament.

Edit Zgut, a political scientist at the Polish Academy of Sciences in Warsaw, predicted that what appeared to be a clear victory for Orban would allow him to move further in an autocratic direction, sidelining dissidents and capturing new areas of the economy.

‘Hungary seems to have reached a point of no return,’ she said.

‘The key lesson is that the playing field is tilted so much that it became almost impossible to replace Fidesz in elections.’

The opposition coalition, United For Hungary, asked voters to support a new political culture based on pluralistic governance and mended alliances with the country’s EU and NATO allies.

While Orban had earlier campaigned on divisive social and cultural issues, he dramatically shifted the tone of his campaign after Russia’s invasion of Ukraine in February, and has portrayed the election since then as a choice between peace and stability or war and chaos.

While the opposition called for Hungary to support its embattled neighbour and act in lockstep with its EU and NATO partners, Orban, a longtime ally of Russian President Vladimir Putin, has insisted that Hungary remain neutral and maintain its close economic ties with Moscow, including continuing to import Russian gas and oil on favorable terms.

At his final campaign rally Friday, Orban claimed that supplying Ukraine with weapons – something that Hungary, alone among Ukraine’s EU neighbours, has refused to do – would make the country a military target, and that sanctioning Russian energy imports would cripple Hungary’s own economy.

‘This isn’t our war, we have to stay out of it,’ Orban said. 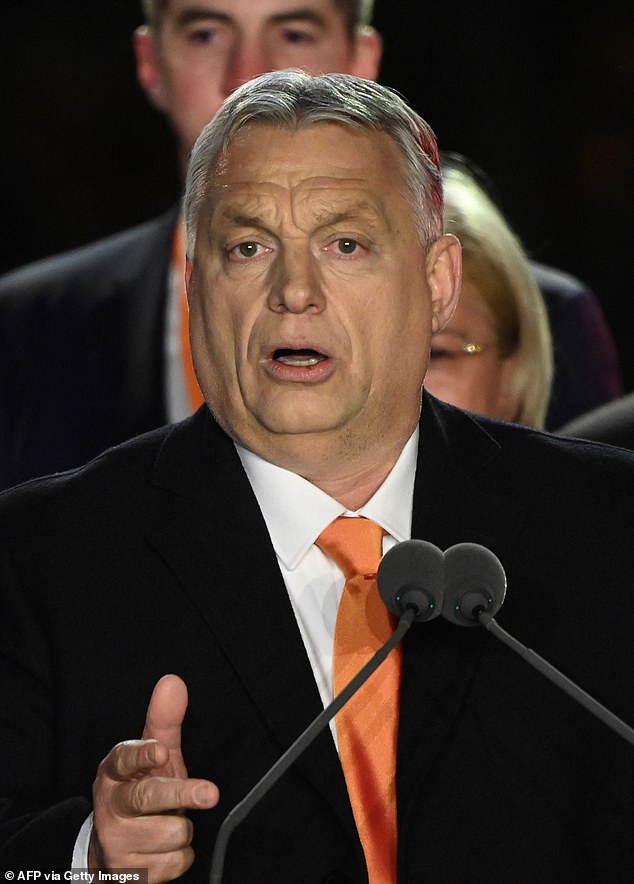 Orban, who has often been condemned by the European Union for democratic backsliding and alleged corruption, appears set to win a fourth term as Prime Minister

The president of Ukraine, Volodymyr Zelensky, on Saturday depicted the Hungarian leader as out of touch with the rest of Europe, which has united to condemn Putin, support sanctions against Russia and send aid including weapons to Ukraine.

‘He is virtually the only one in Europe to openly support Mr. Putin,’ Zelensky said.

After voting in his hometown of Hodmezovasarhely, where he is mayor, Marki-Zay called Sunday’s election an ‘uphill battle’ due to Fidesz’s superior economic resources and advantage in the media.

‘We want to show that this model that Orban has … introduced here in Hungary is not acceptable for any decent, honest man.’

Marki-Zay later wrote on social media to thank all Hungarians who cast a vote and the more than 20,000 volunteer ballot counters who opposition parties assigned to polling places across the country.

‘I express my gratitude to the civilians who spent the whole day checking the cleanliness of the election and are now starting the count,’ Marki-Zay wrote.

Orban – a fierce critic of immigration, LGBTQ rights and ‘EU bureaucrats’ – has garnered the admiration of right-wing nationalists across Europe and North America.

He has taken many of Hungary’s democratic institutions under his control and depicted himself as a defender of European Christendom against Muslim migrants, progressives and the ‘LGBTQ lobby’.

Along with the election to parliament, a referendum on LGBTQ issues was being held Sunday.

The questions pertained to sex education programs in schools and the availability to children of information about sex reassignment.

The Organization For Security and Cooperation in Europe sent a full observation mission to Hungary to monitor Sunday’s election, only the second time it has done so in a European Union country.

Who is Ellie Goulding’s husband Caspar Jopling? – The Sun