A VILE shopper was pictured wearing a Klu Klux Klan hood while shopping at the grocery store.

The man was seen wearing the offensive hood just a day after San Diego County made it mandatory for all residents to wear face coverings in public. 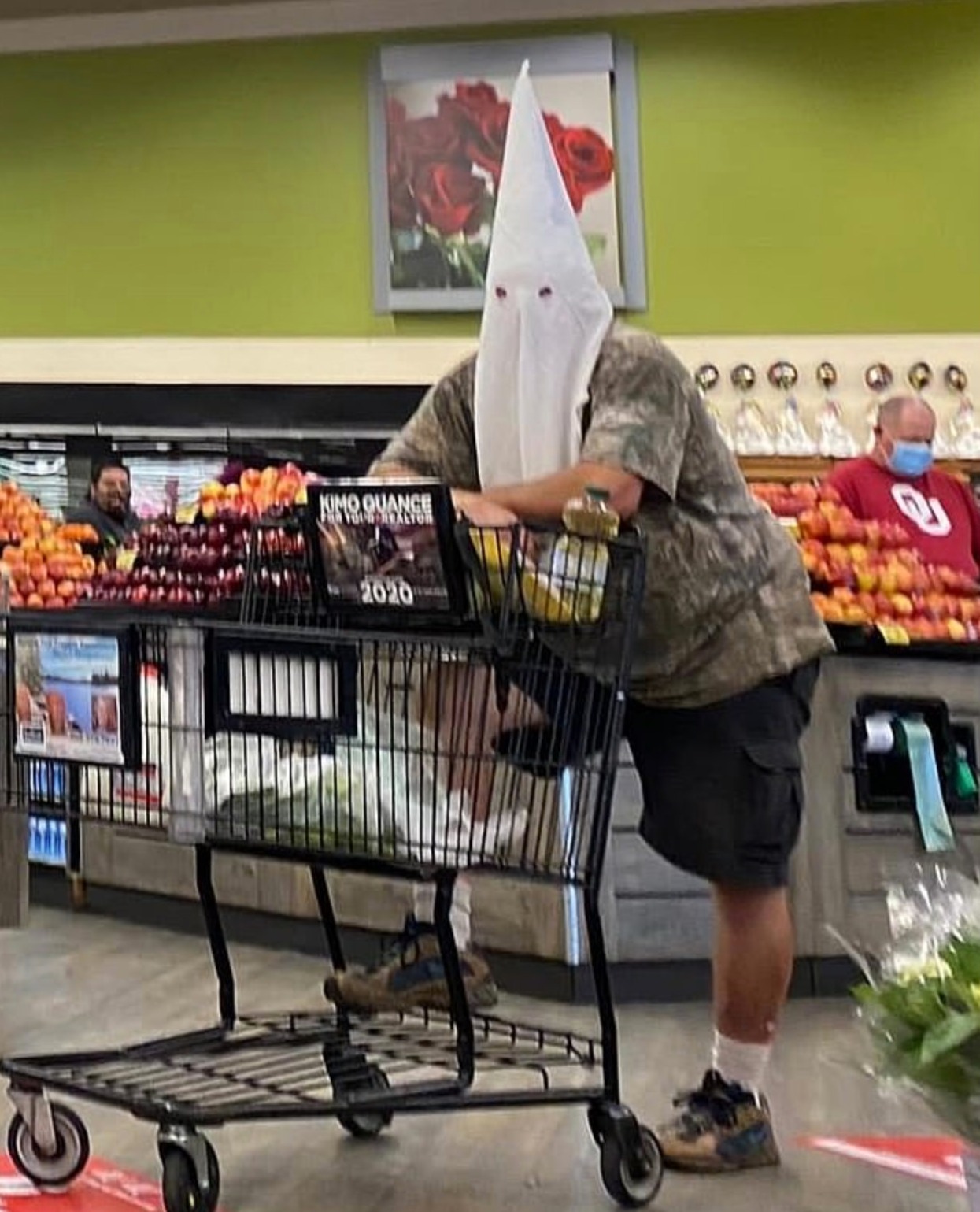 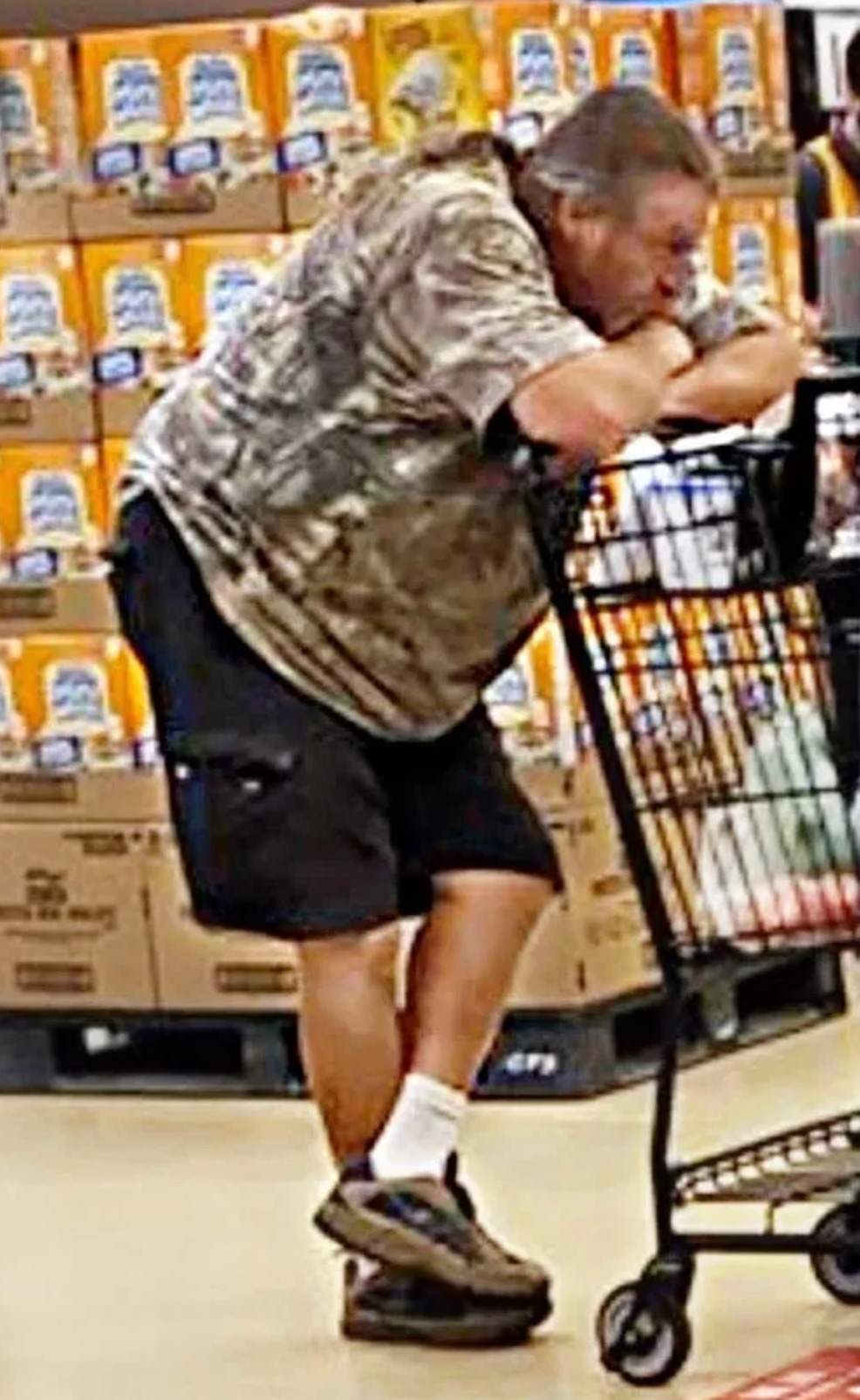 Pictures taken from a Vons supermarket in Santee, California show the man wearing the hood inside the store.

Images show him wearing the hood as he pushed his cart around the store, and opening a produce bag.

One picture shows the man without the hood on as he leaned on the handle of the shopping cart.

The man was repeatedly asked by employees to remove the hood while shopping – but only did so when he was in the checkout line, a spokesperson told the Los Angeles Times.

After the supervisor told him to remove the hood or leave, he removed the hood, purchased his items, and left.

The incident occurred on May 2, the day after San Diego County made it mandatory for all residents to wear a face covering in public due to the coronavirus pandemic.

People have become outraged by the incident, with police, the mayor, and others saying the symbol of hate will not be tolerated. 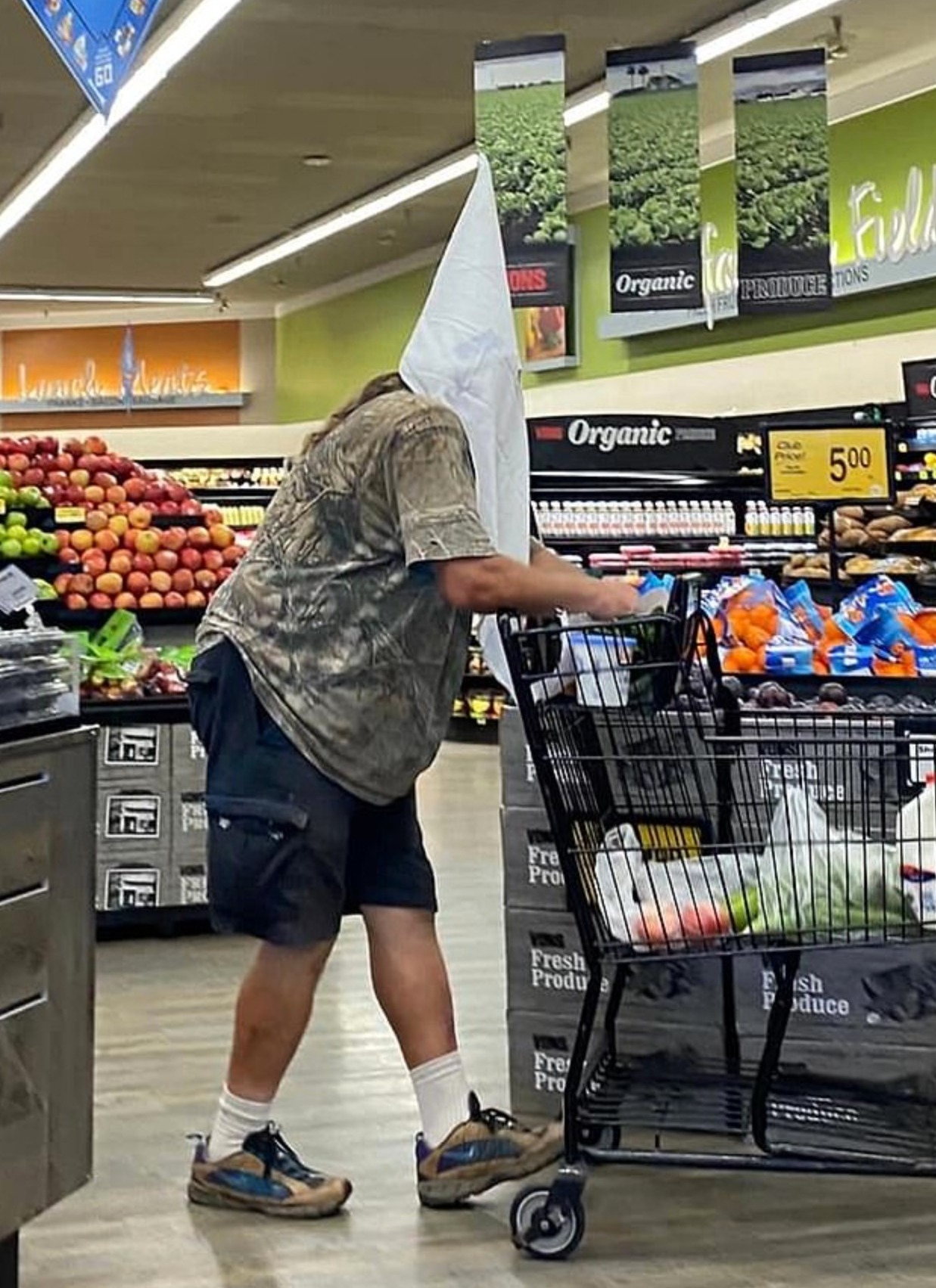 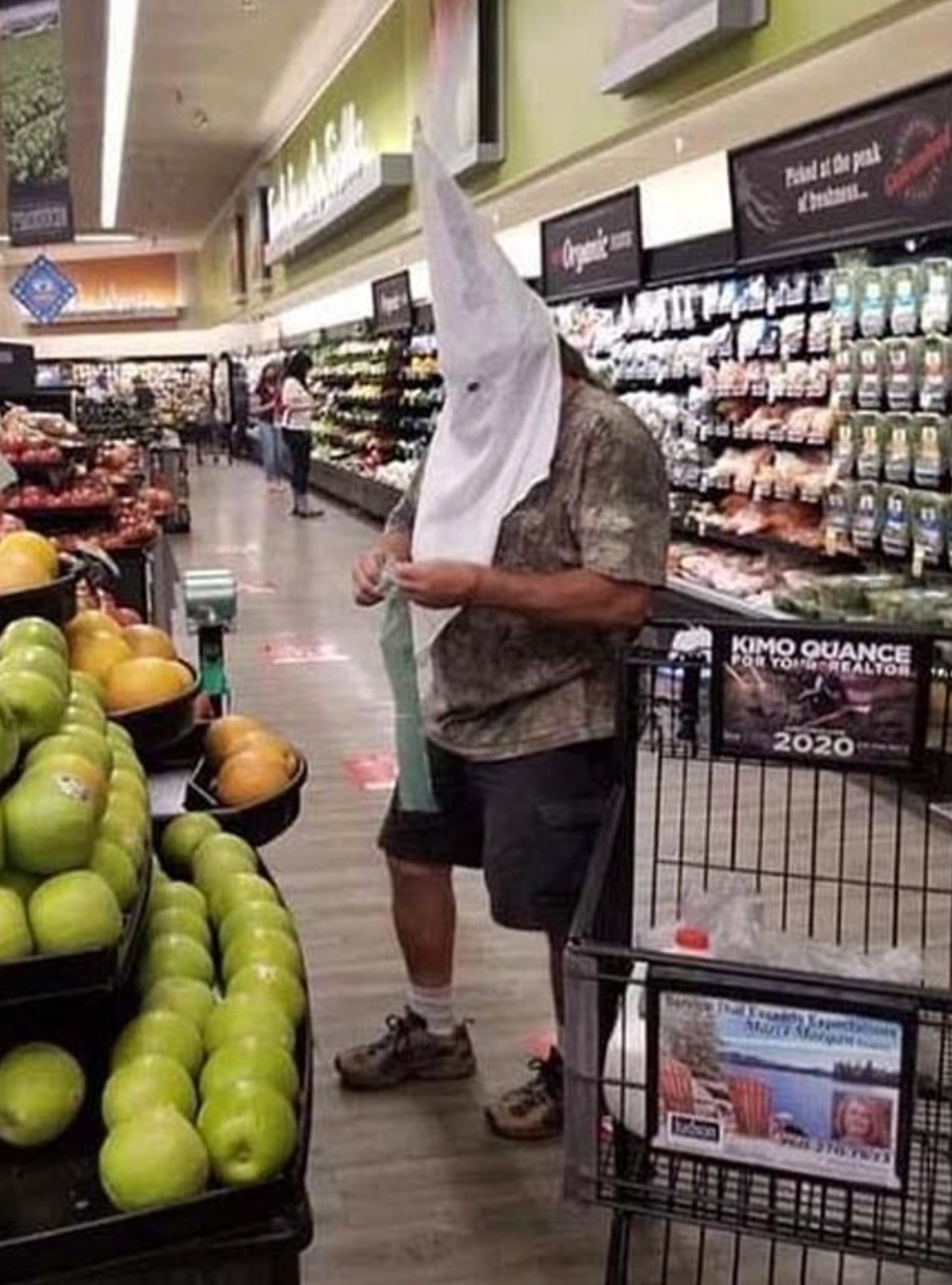 Santee City Mayor John Minto thanked the people who stepped in "to curtail this sad reminder of intolerance."

"Santee, its leaders, and I will not tolerate such behavior," Minto said in a statement.

"Santee and its citizens are great, and this particular individual's actions are not representative of us as a people and a wonderful city," he added.

The city of Santee had an old reputation for connection to white supremacists, and had nickname "Klantee," the Times of San Diego reported.

"The images I’ve seen are abhorrent. This blatant racism has no place in Santee or any part of San Diego County," Jacob said in a statement on Twitter.

"It is not who we are. It is not what we stand for and can’t be tolerated," she added.

The San Diego County Sheriff's office said in a statement they were not called to the grocery store while the man was shopping there, but that they are investigating the incident and "will pursue any appropriate criminal charges." 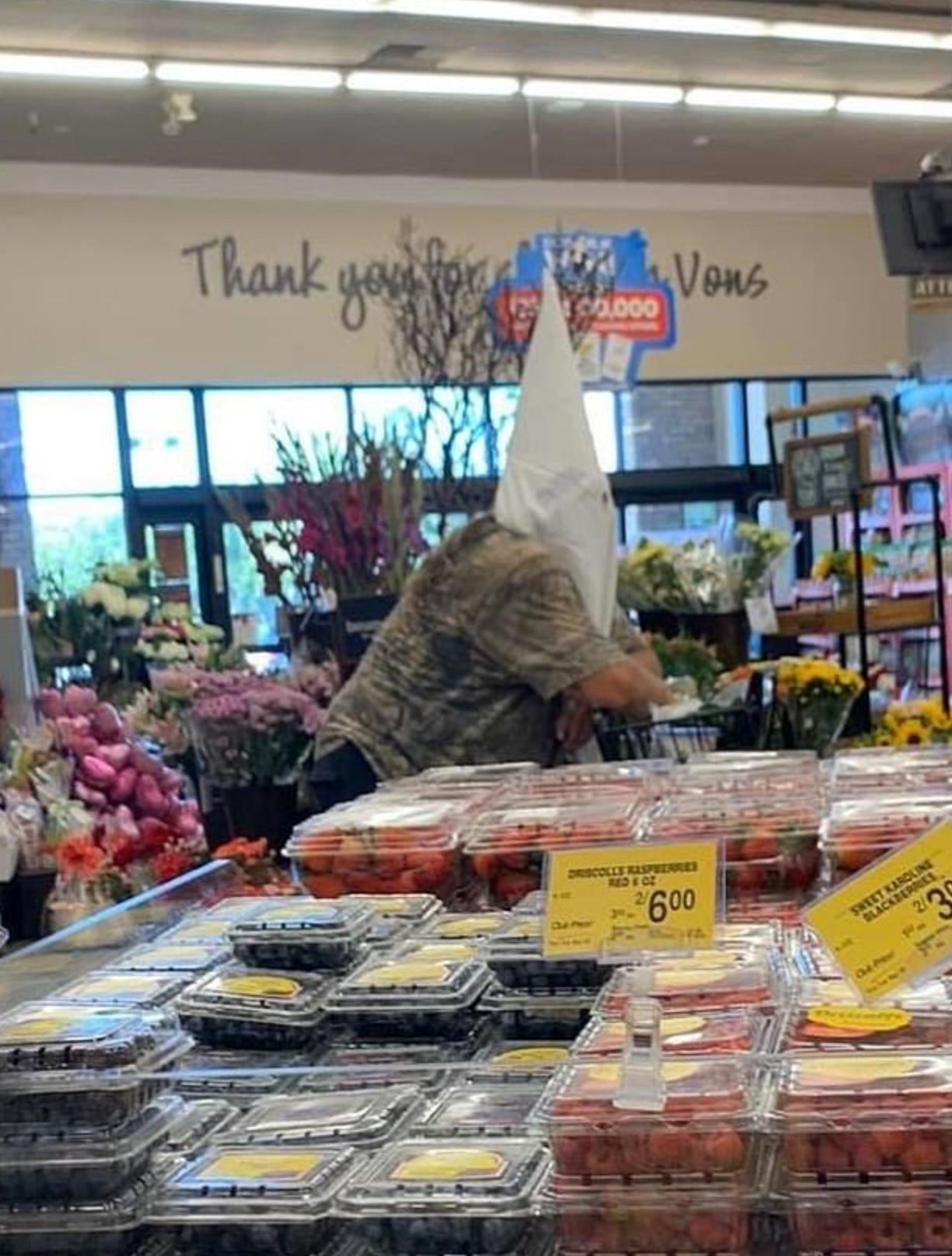 "The Sheriff's Department does not condone hate acts or any acts of intolerance in our communities," police said in a statement.

"We are a county that is welcoming of people from all backgrounds."

Police have asked anyone with information on the incident to contact 619-516-4050.

Inside Grenfell Tower after the fire – what does flat 16 look like now and where did it start?

Watch Sonja Scream at Dorinda Over Her Family Crest on ‘RHONY’

'I felt like I failed': Michelle Obama opens up on miscarriage, IVF