Mistletoe and whine! Bailey the Vizsla throws a tantrum because he wants his Christmas stocking NOW

This is the comical moment an impatient dog wails out in annoyance when his owner stops him from approaching his Christmas stocking before the festive day next week.

The footage, which was captured in Hertfordshire, shows disgruntled Vizsla Bailey howl with frustration and wag his tail furiously after his owner Alison Dear, 53, tells the six-year-old ‘you have to wait for Santa Claus’.

The eager dog keeps crying while facing the festive sock hanging above the fireplace and even tries to approach it several times before stepping and sitting back down on the carpet. 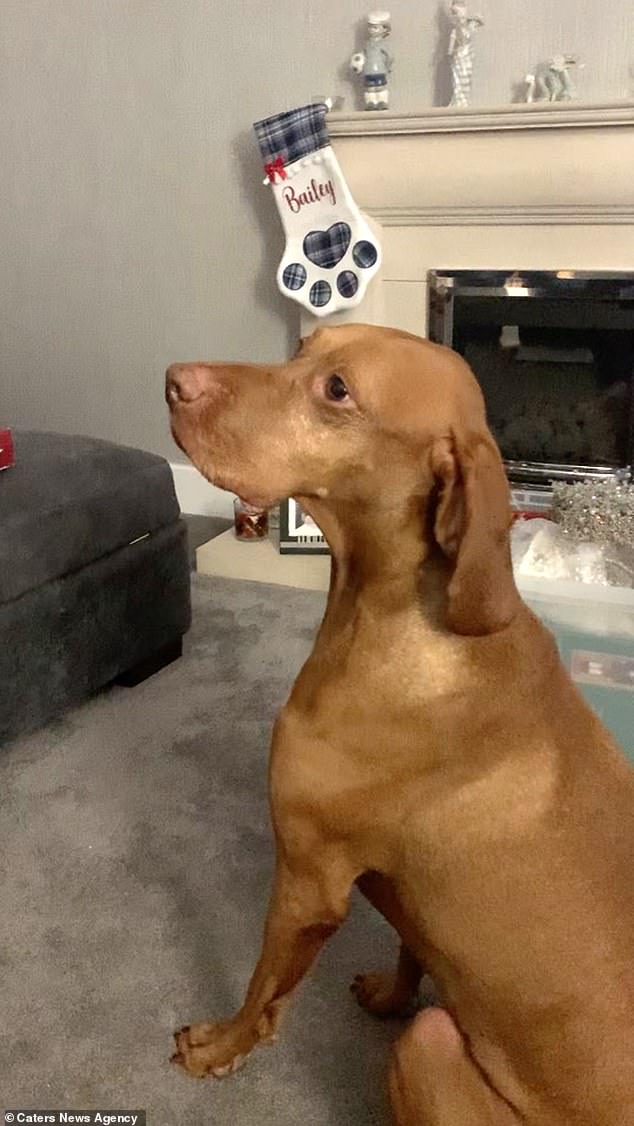 The annoyed Vizsla Bailey, six, from Hertfordshire, stares at the festive sock hanging above the fireplace 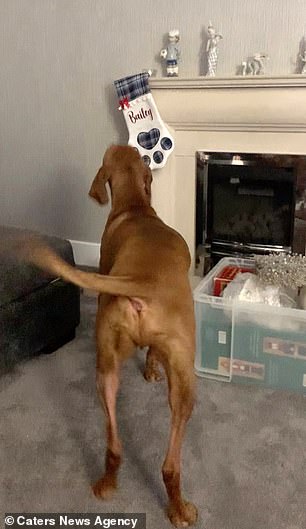 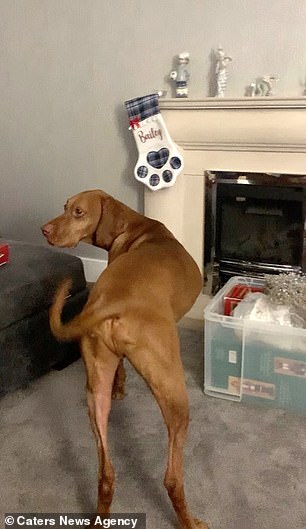 The frustrated dog tries to approach the fireplace before he is told by his owner Alison Dear, 53, that he must wait till Christmas Eve and then to Christmas Day

During the clip, which was filmed on December 8, Bailey stares at the stocking and tries to walk over to it before being told by Alison: ‘No you have to wait for Santa Claus.’

The dog groans with dismay before making another attempt to get to the sock and being told by his owner once more: ‘Santa’s not been yet. He’s not been yet. You have to wait till Christmas Eve and then to Christmas Day. It’s not time yet.’

Despite his owner’s insistence that he refrain from opening the stocking, Bailey’s howls become louder and he begins to wag his tail furiously as Alison tells him yet again: ‘I know but not yet darling.’

Alison’s daughter, Danielle Dear, 23, who captured the cute moment and uploaded the footage to social media, said: ‘We had never seen him making a scene like this. 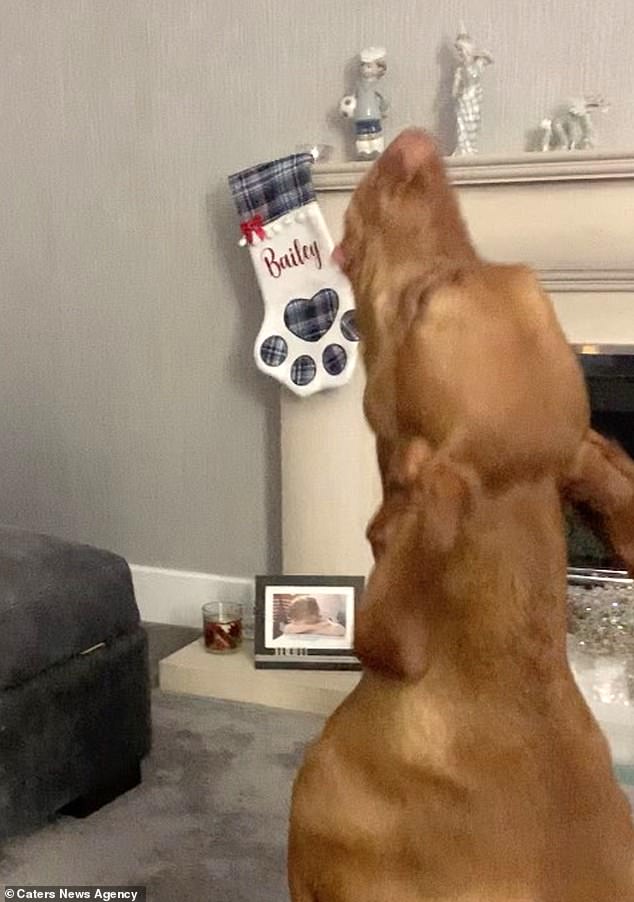 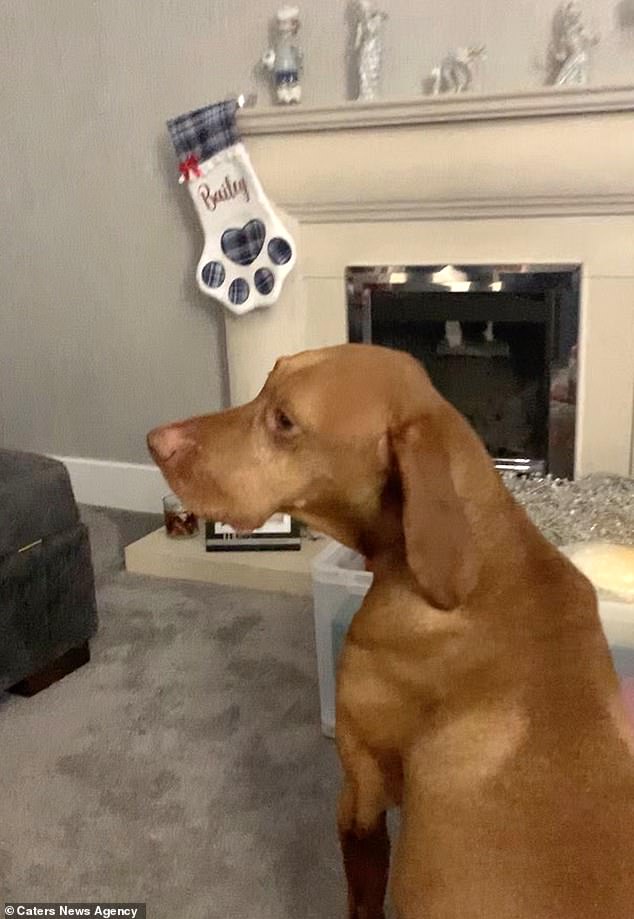 ‘We normally hang up the stocking and it stays there until Christmas Day, we then get it down and pass Bailey presents from it.

‘We heard him making a noise for around a minute and then went in to find out what was going on, then filmed his reaction.

‘He carried on for a further couple of minutes where I got the stocking down, showed him that it was empty and then I even had to hide it.

‘He’s very vocal and has a really funny personality, he’s always fun to hang out with.’ 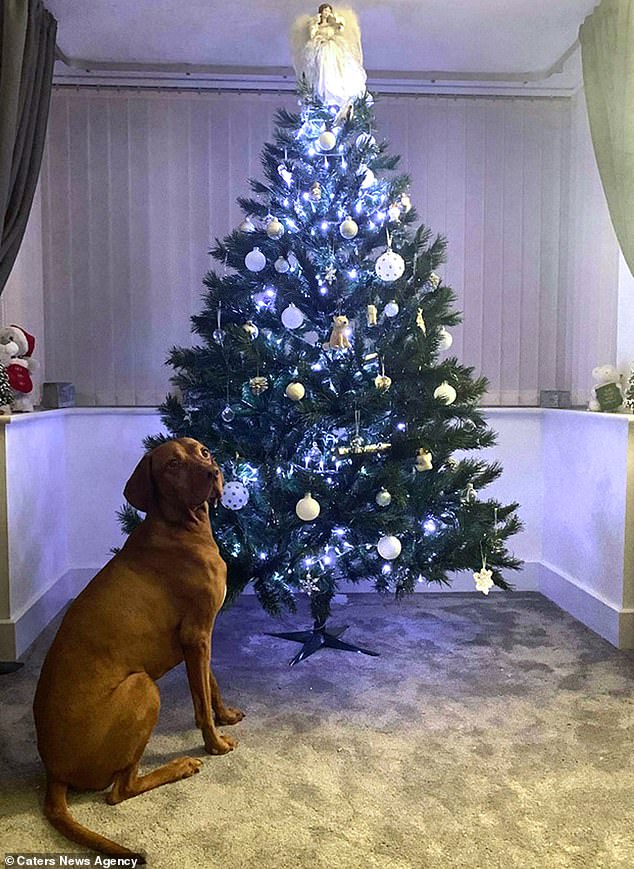 After making a scene, Bailey’s owner decided to take down the stocking and show him that it was empty