Washington: American anti-drug policy in Latin America needs to change if the US is to effectively combat a problem worsened by the COVID-19 pandemic, a congressional commission will say in a bipartisan research report coming out this week.

The 117-page report urges "smarter" interagency policies led by the US State Department to reduce the supply of dangerous drugs. It also calls on authorities to combat money laundering by blocking the flow of illicit funds using cryptocurrencies and complex cross-border financial transactions. 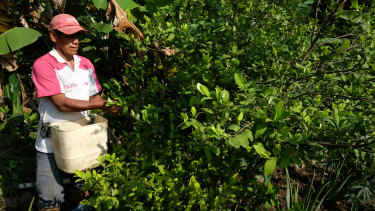 In a small village in Colombia, a farmer picks Coca leaves.Credit:Getty Images

It is the result of 18 months of research into the "war on drugs" that has cost billions of American taxpayers' dollars without ending high rates of violence and corruption in much of the western hemisphere.

"An increasingly complex threat requires a more agile, adaptive long-term strategy," the Western Hemisphere Drug Policy Commission said in the report, seen by Reuters ahead of its release.

The US House of Representatives Foreign Affairs Committee has scheduled a hearing for Thursday with testimony from leaders of the commission.

Representative Eliot Engel, the committee's chairman, said he hoped the report would serve as a blueprint for the new administration and Congress "as they work to set our counter-narcotics policies on a far better path." 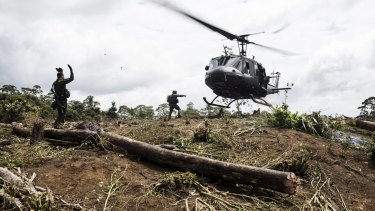 Anti-Narcotics police officers guide a police helicopter to land over a coca field during an operation in Tumaco, Colombia, last year.Credit:Bloomberg

It comes as the coronavirus outbreak increases the challenges of eradicating drug trafficking. "The pandemic has exacerbated conditions that are worsening our ongoing opioid crisis, such as lack of adequate treatment, economic distress, and social isolation," said the report issued by a panel of former Democratic and Republican government officials and members of the House of Representatives.

The report praises some policies, including programs in Colombia to provide alternatives to growing coca – the source of cocaine – and support for criminal justice reforms in Mexico. It cites uneven progress from police reform schemes in the troubled nations of the "Northern Triangle" – El Salvador, Guatemala and Honduras.

The report also found that counter-narcotics policies have caused considerable harm. For example, some efforts to eradicate production of coca have moved production, and associated violence, to new communities.

The administration of President-elect Joe Biden is expected to shift the US approach to the region, with more emphasis on aid, diplomacy and human rights than President Donald Trump's focus on sanctioning Venezuela and Cuba and stopping immigrants at the US border.

A Complete List of All the 'New Girl' Thanksgiving Episodes

Off-duty police, firefighters under investigation over US Capitol riot

7 Unexpected Signs Of A Fast Metabolism, According To Doctors

What it's like to be in lockdown on a cruise ship