Almost everyone these days carries a device that tracks their movements and shares that information with an array of companies. They may use it to offer everything from food deliveries and car rides to virtual monster hunts. It's ironic, then, that we're so reluctant to use the same capabilities to fight a pandemic that could kill millions.

Thanks to the location and personal data that we share with the likes of Facebook Inc. and Alphabet Inc. via our mobile phones, the world's population is currently under routine surveillance in a manner that would have made George Orwell blanch. 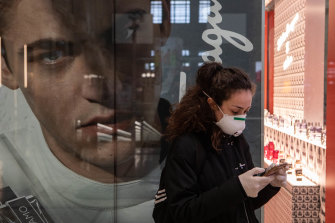 We are fearful of phone tracking, but during this crisis it could be a saviour. Credit:Getty Images

That's a source of justified disquiet at the best of times. As the COVID-19 coronavirus was quietly beginning its spread through the population of Wuhan in December and January, a series of New York Times articles outlined the staggering amount of data that we've given up to technology companies. For all the talk of information being rendered anonymous, it's trivially easy to crack someone's identity by simple tricks like checking where they sleep each night and work during the day.

In the current crisis, it's worth contemplating whether that's more of an opportunity than a danger. We're rightly concerned about surveillance when it's done by a business or a government with nefarious intent – but the word "surveillance" also describes a medical practice that's crucial in suppressing epidemics.

Identifying those who've been infected, tracing their contacts, and restricting or checking on the movements of whoever may have been exposed has been a vital step in reducing the spread of diseases for more than a century. The discipline of epidemiology dates back to John Snow, a London doctor who managed to tame an 1854 cholera outbreak by tracking who'd had direct and indirect access to a tainted water pump. Alongside more broad-based and disruptive restrictions such as closures of borders, schools and businesses, disease surveillance is still one of the few tools we have to combat COVID-19 until workable vaccines become available – and that may be 18 months away.

It's extraordinary in this context that we're not yet seeing wider use of the world-class surveillance technology at the fingertips of every phone company in the world. Instead, the very thought of such measures makes many queasy.

China has introduced scanning of QR codes so that only residents and employees can gain entry to apartment complexes and offices, as well as assigning citizens "traffic light" levels of infection risk based on their travel history. In a country where surveillance has already been used to restrict civil liberties, there are reasonable fears that those technologies could end up becoming permanent features of life. But in nations governed by democracy and the rule of law, we shouldn't let knee-jerk discomfort cause us to reject measures that could save lives in a crisis.

At present, much of the discussion is happening behind closed doors. Companies whose tracking of personal data has alarmed civil liberties activists, including Palantir Technologies Inc. and Clearview AI Inc. have been in talks with US federal and state agencies about using their tools to track the pandemic, the Wall Street Journal reported this week, citing sources it didn't identify. Government representatives didn't respond to the newspaper's requests for comment about the talks.

That's the wrong approach. As was seen in the wake of the quarantines that were imposed in Canada during the 2003 severe acute respiratory syndrome epidemic, people are generally quite accepting of temporary restrictions on civil liberties in a crisis of this sort. It's crucial in winning that trust, though, that governments are open about what they're doing.

A sensible application of these tools might allow health agencies to remind people to stay indoors at times when the risk of infection is high, or simply wash their hands as soon as their location data line up with home again. Rather than using up emergency services resources on physically restricting the movements of infected people – as in the case of a man in Kentucky who's had police stationed outside his home since he refused to self-isolate after testing positive for the virus – the same tools might allow doctors to telephone people as soon as they break quarantine and warn them of the risks, or alert others when a quarantine-breaker is in the broad vicinity.

No one wants to turn our mobile phones into a digital version of the medieval leper bell. Still, it should be possible to craft technologies and policies that can provide limited data access to health authorities when a pandemic has been declared, before reverting to normal once the infection risk has fallen.

Broad-brush opposition to all government use of our personal data will leave us fighting the spread of pandemic with one hand tied behind our backs. Adding to the toolkit that health services have to tackle coronavirus may literally now be a matter of life and death.

David Fickling is a Bloomberg Opinion columnist covering commodities, as well as industrial and consumer companies. He has been a reporter for Bloomberg News, Dow Jones, the Wall Street Journal, the Financial Times and the Guardian.

Drunk Shopping Generates $45 Billion Per Year in the U.S.

Taxes could be raised on homes, cigarettes and local businesses after coronavirus crisis decimated gov budgets – The Sun