The first time I was told that elective surgery would be wound back, I was a medical student. It was April of that year, and the hospital had exhausted its funding for the financial year.

During the annual flu season (which follows no-more-money season), there are often further surgical restrictions. In 2007, the very necessary Victorian nurses strike cancelled elective surgery. In 2009, the impact of swine flu resulted in surgical postponements too. Now we don’t run out of budget as often because we’ve just stopped offering a whole bunch of procedures in our public hospitals. 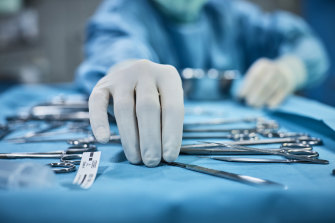 Elective surgery has been stopped a lot in the past few years.Credit:iStock

For years, I’ve booked surgical patients conditional on bed availability, and then told them to go home and come back tomorrow, or next week, or next month. I have become expert at managing cancellations on the day of surgery, variations of: “Sorry, I know you took time off work and fasted and came in, but we don’t have a bed,” said with as much kindness as I can muster.

On a good day, we negotiate. There’s only one ICU bed, which of these three patients can go ahead? The one who has travelled six hours to get here, or the one who lives locally but might deteriorate?How to factor in the patient who is asleep and has an ICU bed booked but might not need it?

On a bad day, all those patients are postponed before they arrive.

Elective surgery, a term previously foreign to those outside healthcare, has always acted as the redundancy in a healthcare system that always runs beyond capacity.

But elective surgery isn’t just a facelift or a nose job, nor is it just cancer surgery. Most of what we do prevents disease or permanent damage; it restores sight, hearing, feeling, function. The ability to work, to live independently, to learn, to bear children, to not have constant pain.

In March 2020 there was a global shortage of anaesthetic drugs and masks and gowns. In Victoria, in the winter of 2020, our public and private hospitals filled with patients from nursing homes, and theatre nurses were redeployed to care for them. During the Delta wave in Victoria and NSW, theatre recovery rooms were converted to secondary intensive care units, sometimes staffed by anaesthetists redeployed from doing surgery.

We’ve stopped surgery a lot in the last few years.

Now I get phone calls from physicians advocating for their patients who need surgery. Despite the challenges of previous decades, this is new. A paediatrician worries about a toddler with correctable hearing loss who is missing the entire window in which they can learn language. A geriatrician worries about a woman who lives independently at home but might be forced into nursing home care because she can no longer walk. A GP is worried about the rising number of their patients taking opiate painkillers. A physiotherapist worries about a man who can no longer afford to mitigate symptoms with therapy because it’s been so long since he could work.

All these patients are awaiting elective surgery – as necessary for the infant as for the elderly, for the worker as well as the carer.

The Omicron wave affects ICU less but bed capacity and staffing levels more. This has hit individual hospitals differently. One might have nurses working double shifts while another has staffed theatres sitting idle. Because there’s limited ability to move staff between hospitals, local capacity changes day to day – but surgery restrictions have been written to extend for months.

Even surgeons who have accepted previous surgical stoppages as necessary are questioning the need now as day surgery wards and operating theatres sit empty on many days. As surgical nurses twiddle their thumbs and surgeons sit at home, we worry about our untreated patients, and each other. How will we address this growing backlog safely, without burning out, long after the public has stopped clapping for healthcare workers?

We also know that surgery will remain the redundancy our health system depends on. Even after the pandemic has less impact, we’ll still stop surgery for budget shortages and the summer holidays, for flu season and natural disasters and all the other ups and downs in the demand on our hospitals.

Every day we don’t utilise a part of the health system that could be working, we condemn patients to pain and worsen our backlog. We urgently need a nuanced, localised approach to allowing elective surgery, particularly day surgery, and especially in Victoria.

And we need to build genuine redundancy in our health system so that increased demand on other parts doesn’t always result in patients with surgical problems being forced to wait, and wait some more.

Shia LaBeouf looks so different as he plays his own father