Home » When will borders open? Why Australia needs to set out its COVID endgame

Greg Hunt this week exposed Australia’s predicament. The federal health minister revealed what has been obvious for some time – that Australia’s much-lauded zero-COVID position is incongruous with the world as it is now.

“If the whole country were vaccinated, you couldn’t just open the borders,” Hunt said on Tuesday.

“We still have to look at a series of different factors: transmission, longevity [of vaccine protection] and the global impact – and those are factors which the world is learning about.” 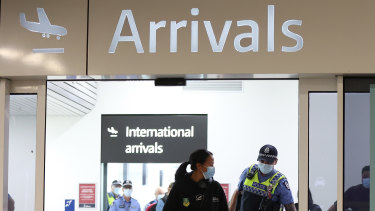 Health Minister Greg Hunt said even if all Australians get vaccinated there is no guarantee the borders will reopen.Credit:Getty Images

This outcome has been obvious ever since National Cabinet committed to a suppression strategy with the goal of zero community transmissions in July last year.

Coronavirus is here to stay. The only disease humankind has wiped out with vaccines was Smallpox and that took 200 years.

What is alarming, however, is the continual shifting of the goalposts – with no public consultation and very little debate – to benchmarks that are impossible to meet.

Vaccines are the sustainable path forward as rollouts that have cut deaths, hospitalisations and infections in Britain, Israel and the United States continue to show. And yet, the Health Minister says vaccination alone will be no guarantee of opening up the borders.

Australians were never told that vaccines had to provide 100 per cent effective protection from disease, prevent transmission and guarantee lifelong immunity in exchange for the right to leave and enter the country freely once more.

Rather, the public was told the big goal was to flatten the curve so hospitals would not be overwhelmed.

With a federal election due next year, Prime Minister Scott Morrison will not want an outbreak of the virus on his watch so hotel quarantine and the international border bans – the core planks of the Fortress Australia COVID response, enacted as emergency measures – will remain for at least two years in total.

He attempted to start a conversation about embracing a strategy other than zero-COVID this week but combined it with a huge warning that open borders would mean at least 1000 cases a week across the country and lead to lockdowns.

His credibility on vaccines has already been eroded after failing to deliver on four million doses by April, then dropping a promise of first jabs to all by October, and then to no goal at all.

He must do better in leading this vital debate.

There was understandably huge public support for the border bans, formation of the national cabinet and even Victoria’s tough lockdown, which led to Australia not just flattening, but as the World Health Organisation’s Mike Ryan put it, destroying the curve.

But what then? There can be no rewind on the pandemic to life as it was in 2019 and Australia has been slow to accept this and ask what it means for its future.

The public deserves to be asked which option it supports. To date it has not, borders have been closed by decree and adhered to with extraordinary compliance from citizens who have so far said they are willing to accept the economic, social and other health costs of stopping any death.

It must choose if it wants to live isolated – bar New Zealand and a handful of other tiny fellow zero-Covid countries – or if it wants to open up and re-engage with the world after most of its population has been vaccinated.

The latter scenario will require acceptance of some level of transmission and, sadly, a small number of deaths the vaccines may not be able to prevent.

It will be a difficult case to mount. Polling conducted by RedBridge in February said 70 per cent of Australians support border bans to eliminate small outbreaks of the virus and 90 per cent supported treating every overseas arrival as a COVID-positive case until proven otherwise.

But Australia, as the government so often reminds us, is in an enviable position with no transmission and vaccines eventually on the way.

It is an ideal climate to set out a long-term plan for how the nation can shift to living in a world with COVID alongside more durable and less intrusive health measures.

Otherwise, what is the point of vaccinating us at all?

Peter Weber Is 'Not Thinking About Dating' After Kelley Flanagan Split

When will car dealerships reopen in the UK? – The Sun