Home » World News » Which countries were in the Soviet Union?

THE USSR was one of the largest political, military, and economic powers in the world during the 20th century.

The Soviet Union was formed of 15 member countries, all ruled by one central communist government. 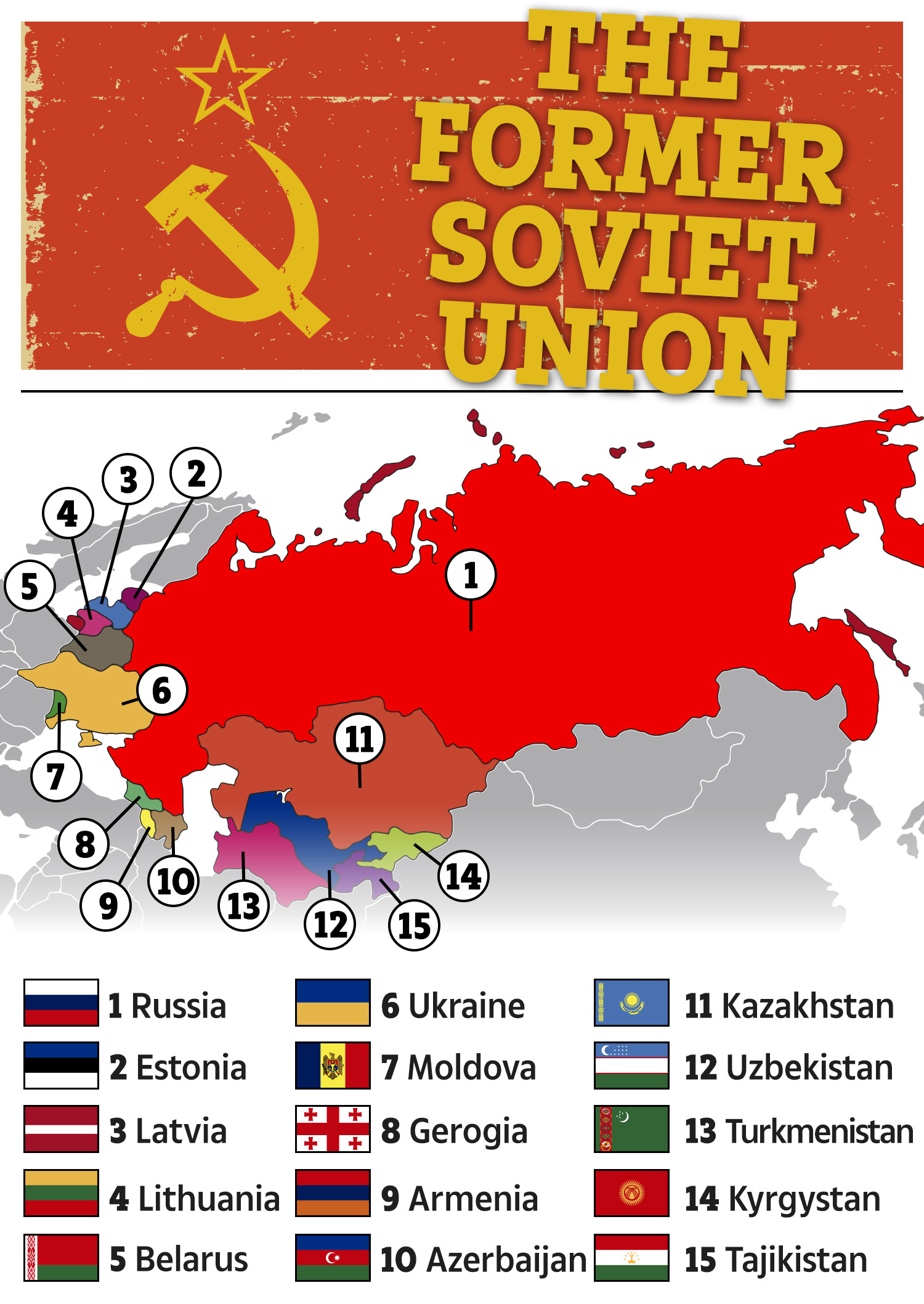 Which countries were in the Soviet Union?

The USSR was a socialist state formed after the Russian revolution in 1917.

It was initially a confederation of the states of Russia, Belarus, Ukraine, and modern-day Georgia, Azerbaijan and Armenia, but eventually grew to include a total of 15 countries.

Here are all republics making up the USSR.

The Russian Soviet Federative Socialist Republic (Russian SFSR) was the largest Soviet republic, with Russians being the largest ethnic group in the country.

On November 7, 1917, as a result of the October Revolution, the Russian Soviet Republic was proclaimed as a sovereign state and the world's first constitutionally socialist state guided by communist ideology.

The economy of Russia was heavily industrialised, accounting for about two-thirds of the electricity produced in the USSR. 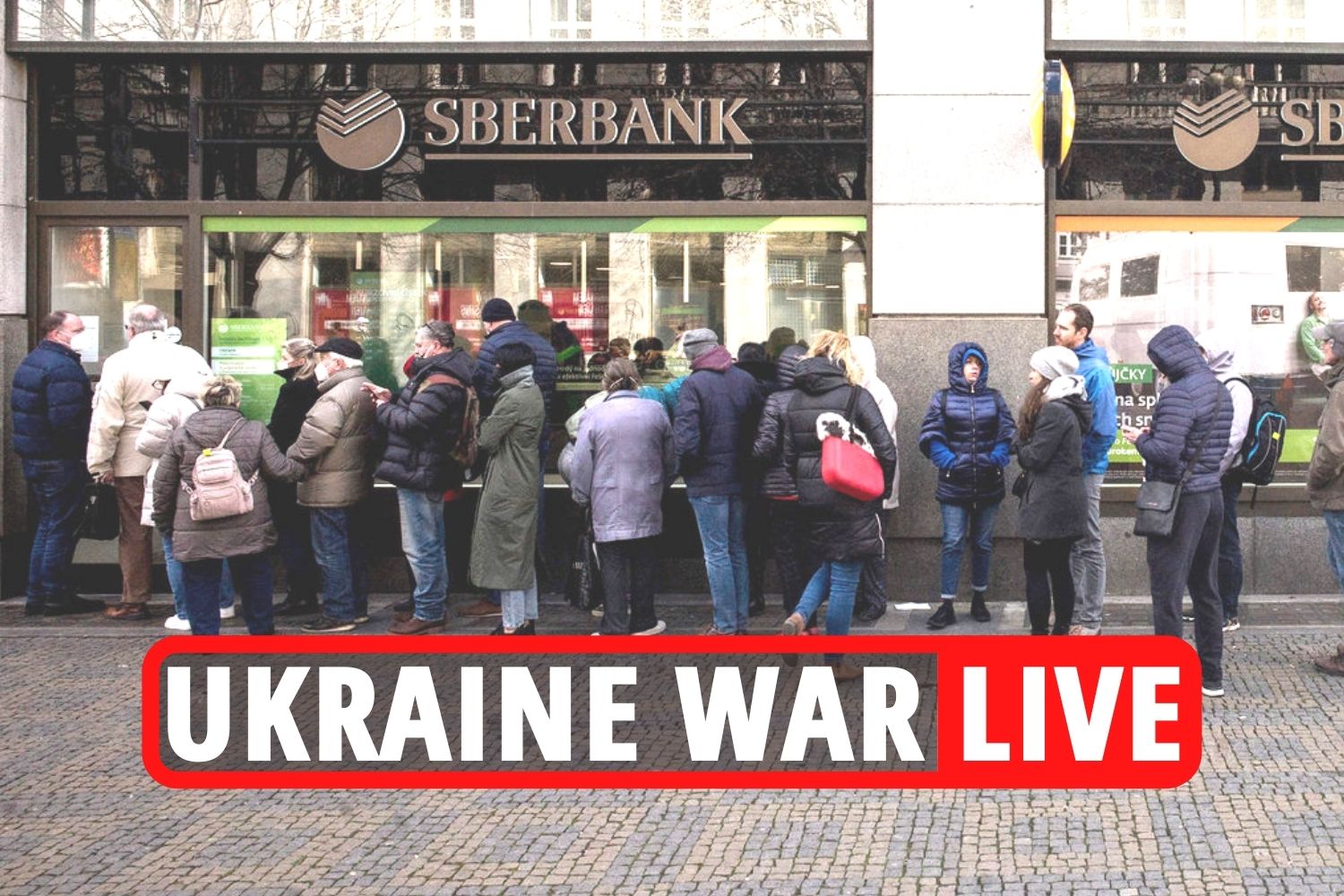 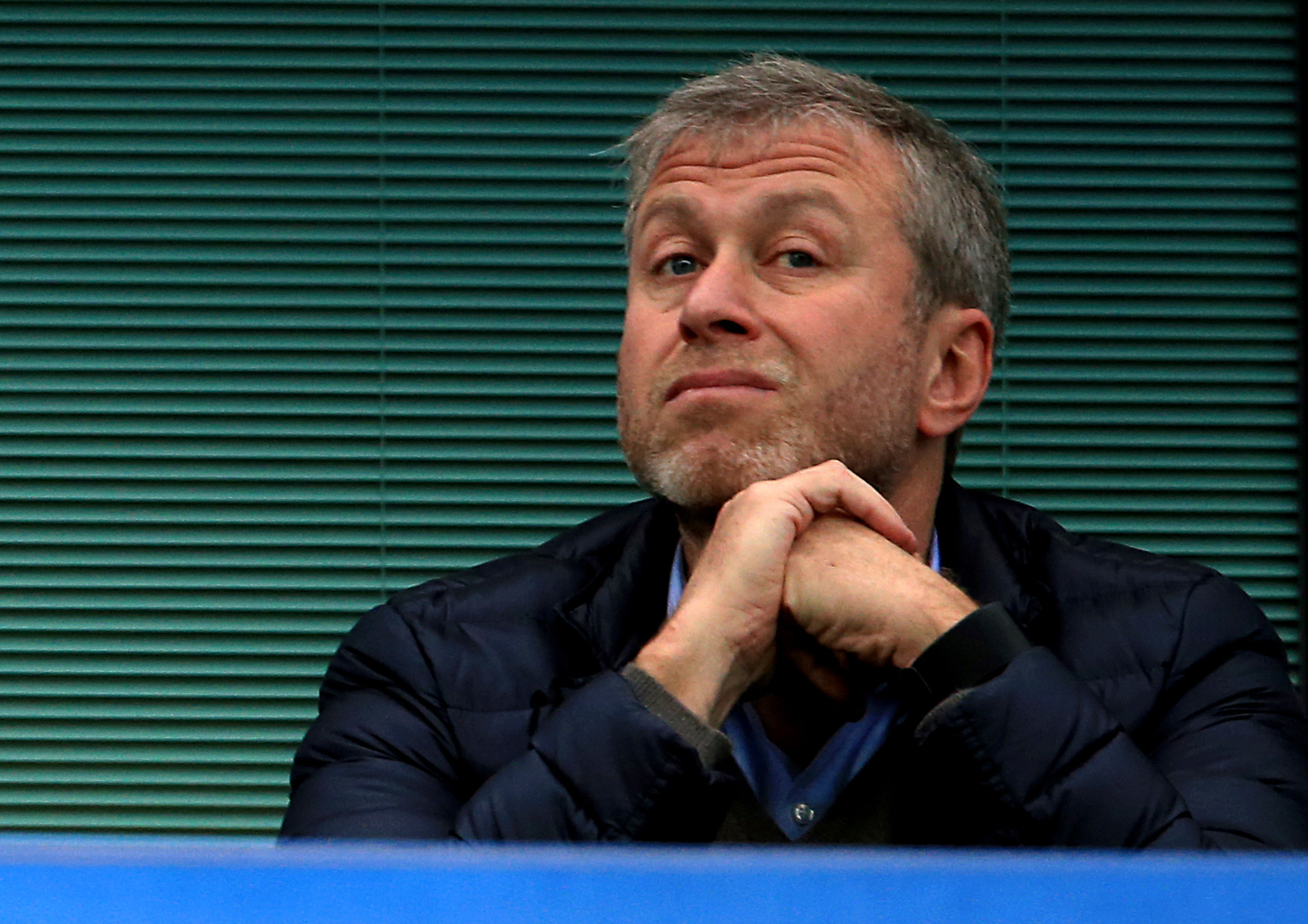 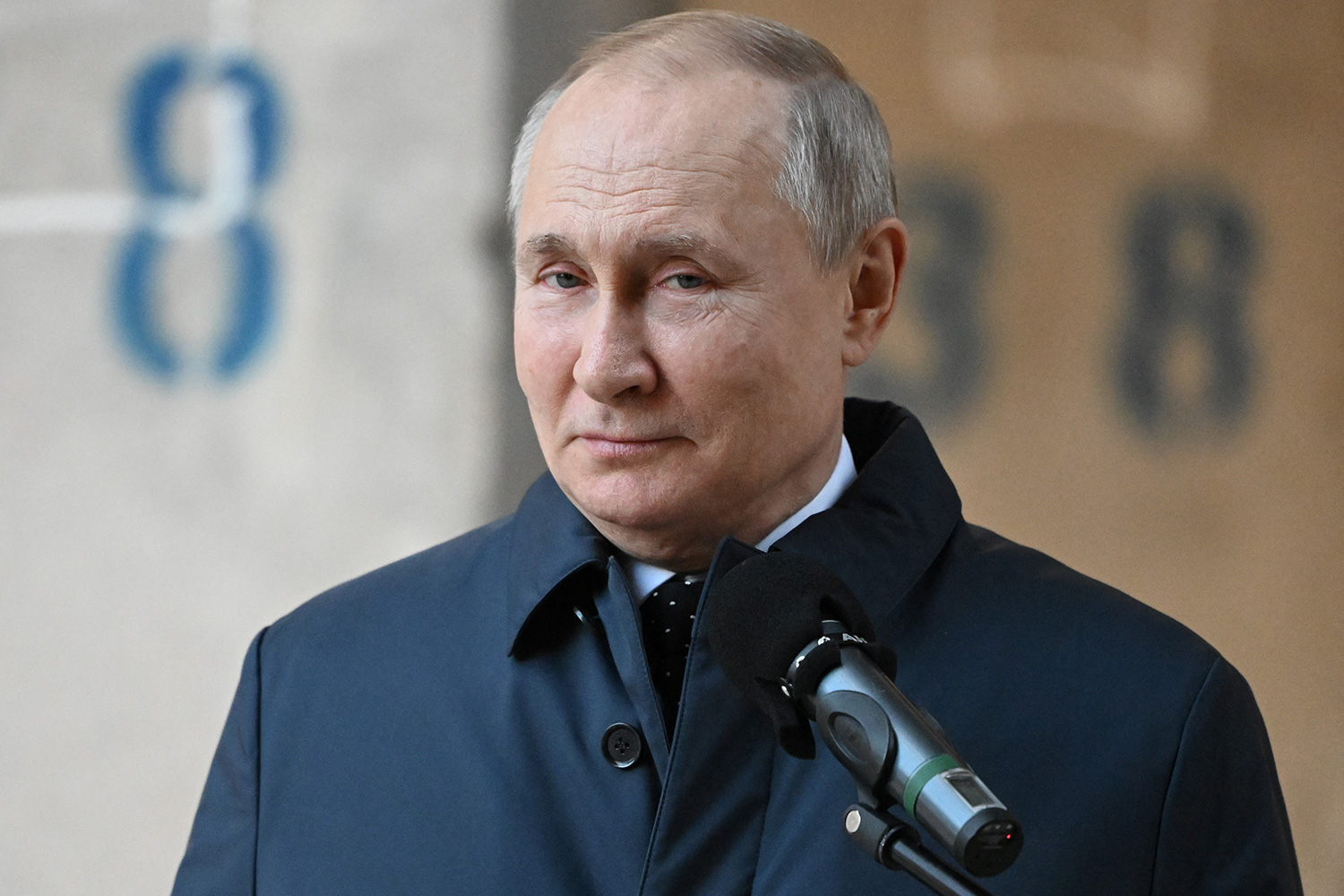 PUTIN ON A BRAVE FACE

Does Vladimir Putin have cancer? 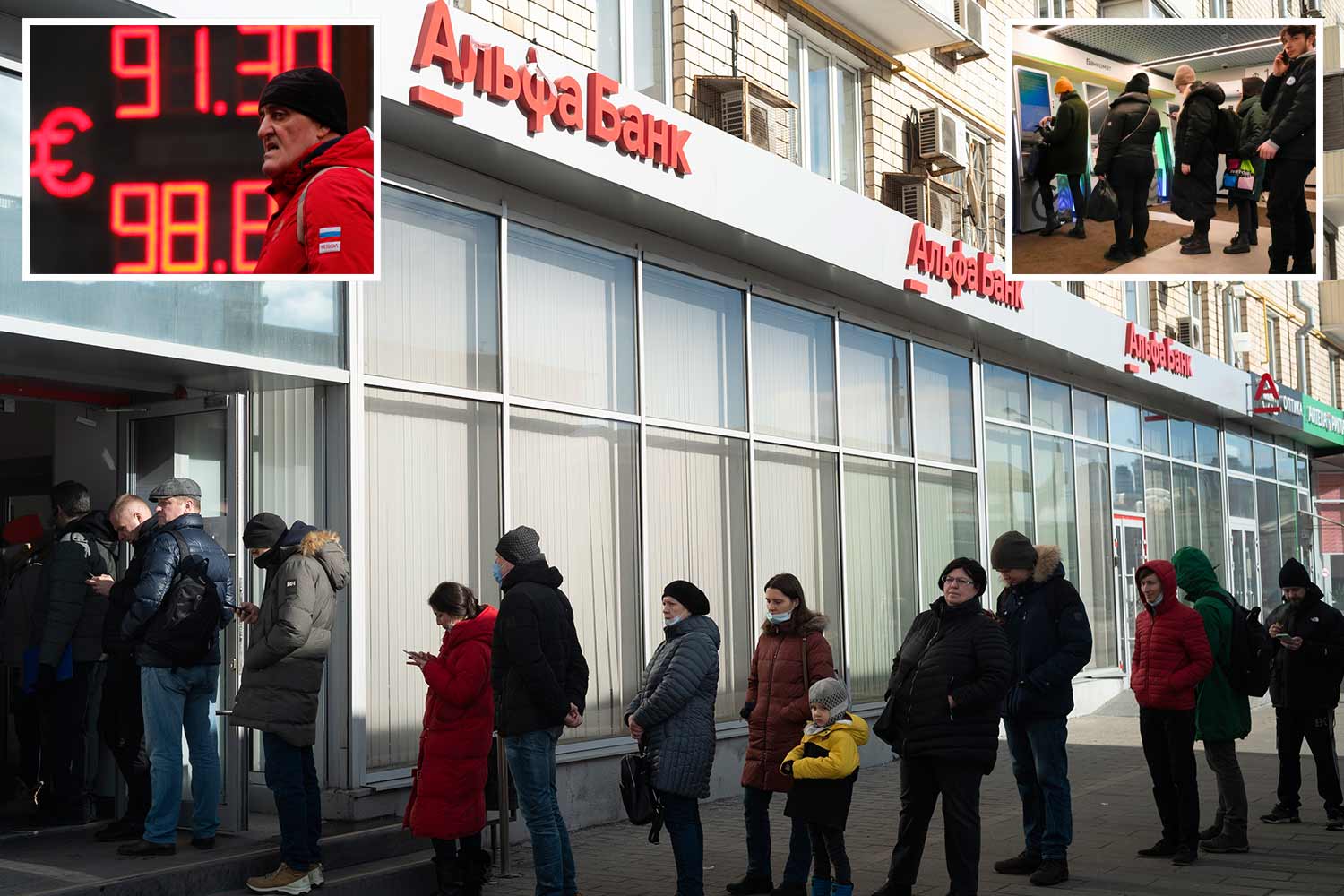 By 1961, it became the third-largest producer of petroleum due to new discoveries in the Volga-Urals region and Siberia, following the US and Saudi Arabia.

The Ukrainian SSR was one of the first countries to form the Soviet Union, from its inception in 1922 until its breakup in 1991.

The Ukrainian SSR was established following the defeat of the Ukrainian People's Republic in the Soviet–Ukrainian War in 1917.

Upon the Soviet Union's dissolution, the Ukrainian SSR was transformed into the independent state of Ukraine.

Throughout its 72-year history, the Ukrainian SSR's borders changed many times, with a significant portion of what is now Western Ukraine being annexed by Soviet forces in 1939 from the Republic of Poland.

In 1934, the seat of government was moved to the city of Kyiv, Ukraine's historic capital.

Belarus was another country to join the USSRas one of its four founding members in 1922, then known as the Belorussian SSR.

Belorussia was one of several Soviet republics occupied by Nazi Germany during World War II.

Belarus declared its independence from the Soviet Union on August 25, 1991.

The Uzbek Soviet Socialist Republic (Uzbek SSR) was governed by the Uzbek branch of the Soviet Communist Party, the legal political party, from 1925 until 1990.

On August 31, 1991, it was renamed the Republic of Uzbekistan and declared independence, three months before the Soviet Union's dissolution.

The Kazakh SSR, located in northern Central Asia, was part of the Soviet Union from 1936 to 1991.

It was the second-largest republic in the USSR, after Russia.

The Kazakh SSR was renamed the Republic of Kazakhstan in December 1991, which declared its independence six days later, as the last republic to leave the USSR on 16 December 1991.

Kazakhstan was admitted to the United Nations on March 2, 1992.

Today, it is home to the independent nation of Kazakhstan.

Georgia was a member of the Soviet Union from its second occupation by Russia in 1921 to its independence in 1991.

Georgia had existed as a series of independent states in the Caucasus prior to its first occupation in the 19th century.

The Georgian SSR was a part of the Transcaucasian Socialist Federative Soviet Republic, along with Armenia and Azerbaijan.

Georgia announced its independence from the USSR on April 9, 1991.

Azerbaijan was one of the constituent republics of the Soviet Union between 1922 and 1991.

In April 1920 Russia installed pro-Soviet figures in the region, which lead to the creation of the Azerbaijani SSR.

In February 1991, Azerbaijan SSR was renamed the Republic of Azerbaijan, which became independent in August of the same year.

During World War II, the previously independent Republic of Lithuania was occupied by the Soviet Army and established as a puppet state in July 1940.

Despite that, many western countries continued to recognise Lithuania as an independent state subject to international law.

In 1989, the Lithuanian SSR declared itself a sovereign state, though still part of the USSR.

The Republic of Lithuania was re-established as an independent state, although Soviet authorities still considered it illegal.

The Estonian SSR was an ethnically based administrative subdivision of the USSR from 1940 until 1991.

It was created a month after the June 1940 Soviet military invasion and occupation of the Republic of Estonia during World War II.

Most western countries did not recognise the incorporation of Estonia into the Soviet Union.

Estonia became the first of the then Soviet-controlled countries to declare state sovereignty from Moscow in 1988.

In March 1990, the newly-elected parliament declared that the Republic of Estonia had been illegally occupied by Russia since 1940.

The Moldavian SSR was formed on August 2, 1940, from Bessarabia, a region annexed from Romania, and the Moldavian Autonomous SSR, an autonomous Soviet republic within the Ukrainian SSR.

Moldova's independence from the USSR was recognised when the Union was dissolved.

The Latvian SSR was established in July 1940, during World War II in the territory of the previously independent Republic of Latvia after its occupation by the Red Army.

Its territory was subsequently conquered by Nazi Germany in 1941, before being retaken by the Soviets in 1944–1945.

Latvia was not recognised as a legitimate part of the USSR by the US or Western Europe.

The full independence of the Republic of Latvia was restored on August 21, 1991.

On August 31, 1991, it transformed into independent Kyrgyzstan.

The Tajik SSR existed from 1929 to 1991, located in Central Asia, created as a national entity for the Tajik people within the Soviet Union.

It was renamed the Republic of Tajikistan in August 1991 and declared its independence from the Soviet Union on September 9, 1991.

Armenia, located in the South Caucasus region, was one of the republics forming the USSR in 1922.

The Soviets took over control of the short-lived First Republic of Armenia in 1920.

On September 21, 1991, the independence of the Republic of Armenia was confirmed in a referendum.

The Turkmen SSR existed as a republic from 1925.

It was declared independent as Turkmenistan in 1991.

Since then, the borders of the country have remained unchanged.

When did the USSR dissolve?

The USSR officially dissolved on December 26, 1991, following a long political and economic decline.

Although the Soviet economy was the second-largest in 1990, the countries within the Union were complaining of economic stagnation.

The Soviet black market was booming, while shortages of consumer goods were commonplace.

Politically, the collapse of the Soviet Union is often connected to the number of radical reforms the incumbent president Mikhail Gorbachev had implemented during his six years as the leader of the USSR.