Victoria is on the cusp of reaching the peak of its third coronavirus wave but epidemiologists say there is no reason why a cautious reopening cannot go ahead next week as planned, despite the state reaching a grim milestone of 2297 new infections in a day.

Experts predict case numbers could begin to fall within days, coinciding with the first significant lifting of restrictions next week, under which fully vaccinated Melburnians will be allowed to get a haircut and dine and shop outside. 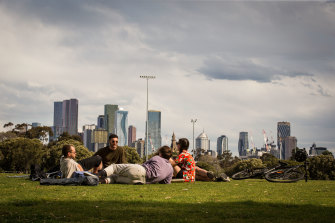 Premier Daniel Andrews confirmed the reopening next Thursday would not be affected by the high case numbers, saying the government had a “fundamentally really important agreement with the Victorian community” that if the public was vaccinated, the state would open up.

Victorians are forecast to hit the 70 per cent double-dose milestone as soon as next Thursday, at which point hospitality venues will reopen to 50 patrons outdoors, Melbourne’s 9pm curfew will be dropped and outdoor gatherings will increase to 10 people.

On Thursday, about 87.6 per cent of Victorians had received at least one vaccine dose and 62 per cent both doses.

“That’s why we’re going to be opening up, because people have got vaccinated in record numbers, in record time, and they should be proud of that,” Mr Andrews said outside Parliament on Thursday.

James McCaw, an epidemiologist and mathematical biologist with the University of Melbourne, said Victoria was on the cusp of hitting its peak of infections, meaning there was no need to re-evaluate the opening plan.

“Maybe it won’t be today or tomorrow, maybe it will be in five days time, but the epidemic is very close to its peak,” Professor McCaw, whose team has been carrying out modelling for the government since the start of the pandemic, said.

“It is far more likely the numbers will start to go down within the next week than it is to continue to rise.”

Professor McCaw said while case numbers were higher in Victoria on Thursday than he had hoped, he had taken heart in promising signs the outbreak was on the verge of plateauing.

For the first time during this outbreak, the transmission potential, which measures how capable the virus is of spreading, by analysing movement and vaccine coverage, dipped to below one.

“This means the virus is just not able to spread,” he said.

But the most reliable indicator of whether the epidemic was growing or declining was the effective reproduction number, which measures how many people each infected person passes the virus on to.

Professor McCaw said this number had also dipped to its lowest point this week since August. For cases to drop, this number needs to fall below one. It is currently hovering just above one.

His view was backed by epidemiologist Adrian Esterman, who said the effective replication number was 1.02 – up from 0.99 on Wednesday – meaning every 100 people infected collectively pass the virus on to roughly 102 others.

Despite the slight increase in the replication number, Professor Esterman was hopeful it was just a “bump in the road to the peak.”

“I’m expecting these numbers could go up a little bit, but it’s fairly clear that the peak is in sight. We might have even reached it,” the former adviser to the World Health Organisation said. “By the end of week if we are still seeing a downward trend in effective reproduction everyone can breathe a big sigh of relief.”

Asked whether another upward surge in infections could upend Victoria’s plan to reopen next week, the professor of biostatistics at the University of South Australia was optimistic this would not be the case.

“Even when Victoria opens, it is not going to be black and white; it’s going to be a very nuanced, careful, opening up,” he said.

Melbourne University clinical epidemiologist Professor Nancy Baxter said the restrictions loosening in Victoria at 70 per cent were “pretty low risk” and the reopening could go ahead as planned.

“We could never do the loosening that they’ve done in NSW. That would be an unmitigated disaster,” she said. “But Victoria has gone a more cautious approach.”

But Professor Baxter warned that any easing of restrictions would drive cases up again and the state could expect a surge of new infections in the weeks after opening up.

This is in line with modelling commissioned by the Victorian government and released alongside the state’s road map to reopening which forecast new cases would reach about 2000 a day on October 10 before plateauing, then jumping again when lockdown lifted at the end of October.

The end point of the Burnet Institute’s projections is worrying, predicting a peak hospital demand of 3150 patients, ICU demand of 706 and a better than one-in-two chance of the healthcare system being overwhelmed later this year.

Doctors in Victoria’s intensive care units warned earlier this month that the state would be forced to ration specialist staff and have them treat many more patients to cope if hundreds of seriously ill people hit hospitals by mid-December as predicted.

Victoria has been tracking slightly better than NSW in terms of hospitalisation at this point in their outbreak, Professor Baxter said. This was perhaps an indication of greater vaccination coverage among older people, who were more likely to become critically ill.

While Victoria has set a national record for daily COVID-19 case numbers, the hospitalisation proportion for cases has dropped to below 5 per cent.

Victoria’s Acting Chief Health Officer, Ben Cowie, said this compared with nearly 10 per cent during the second coronavirus wave in 2020. He reiterated the road map was tied explicitly to vaccination targets and pressure on the hospital system, as opposed to case numbers.

“Keeping those numbers down, keeping our health system able not just to look after people living with COVID, but actually to be delivering care to all the other urgent care that’s required is a really fundamental safety mechanism,” Professor Cowie said.

However, Professor Baxter warned there was still a chance of delaying the freedoms outlined at the 80 per cent double-dose vaccination mark if hospitalisation rates went “through the roof” in the next few weeks.

“They’re really going to have to take a pause and put the brakes on if that happens,” she said. “They’ll need to take the heat off before they dial up the heat again.”

Meanwhile, the Premier left the door open for additional liberties on top of those already announced, saying the fact the state would hit 90 per cent single dose coverage around the same time as 70 per cent full vaccination opened up options.

Queen, Charles & William dragged into Meghan Markle's privacy case as she admits speaking to senior Royals about her dad

Teen, 16, hit and killed by train as she 'took shortcut home' over tracks

Why Piers Morgan Says 'What Happened' to Him and Sharon Osbourne 'Isn't Really About Ms. Markle'