A WOMAN has shared a note sent to her by her neighbour asking her to "stop screaming like a pig" during sex.

A picture of the message went viral after the woman, whose username is Harlot, posted it to twitter. 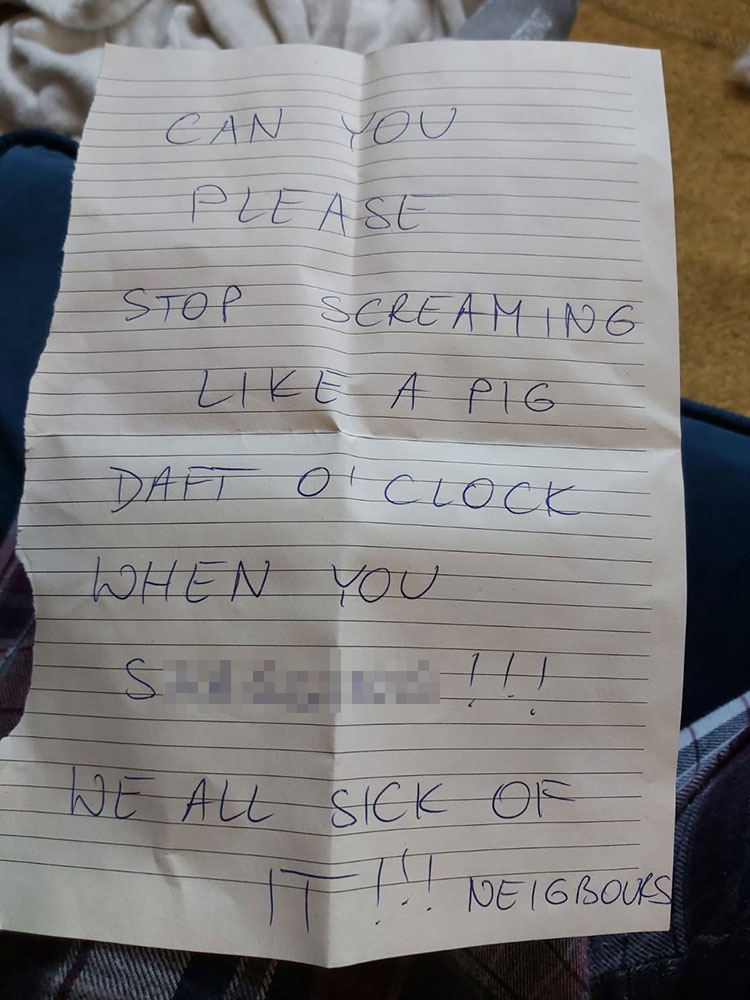 The note was written in block capital letters on a sheet of paper.

"CAN YOU PLEASE STOP SCREAMING LIKE A PIG [AT] DAFT O'CLOCK WHEN YOU SH***ING!!!" it read.

The woman captioned the image: "I personally thought I sounded like the herbal essence woman but go off I guess."

The image has so far had more than 1,100 retweets and over 21,000 likes, and witter users flooded the post with supportive comments.

"Jealous neighbours are SUCH a pain," wrote one.

Harlot replied: "[They] think I haven’t heard they 4 minutes at 9pm on a Friday cause I have and no ones jealous there."

Another person said: "This is basically an invitation to try out some new noises hahaha.

"They're not a fan of pig noises, so what's next."

A third wrote: "Have to send [them] a Kama Sutra book, miseries need to spice up their lives."

Another person said they'd been in a similar situation before and found it difficult.

"I once lived in a flat and my neighbour downstairs used to bang on my ceiling with a broom handle during sex," she wrote.

"I tried to laugh it off but truth was it made my life miserable."

Harlot replied: "As much as am joking about it honestly am very aware now. And feel hella uncomfortable."

Does Lauren Conrad Have ‘The Hills’ Era Outfit Remorse?

Fortnite banned from iPhone and Android app stores but can you still play this Epic game?