Light at the end of the tunnel: Wuhan hosts spectacular LED shows after lifting draconian lockdown to thank medical workers who helped the city beat the coronavirus

A stunning light show brightened up the midnight sky in Wuhan yesterday as the former epicentre celebrates the end of its 76-day coronavirus lockdown.

A video shows bridges and skyscrapers on either side of the Yangtze river displaying animated images to thank all the medics and key workers who helped the city beat the epidemic.

Since Wednesday, 11million residents have been allowed to travel in and out of the city where the pandemic first began in December. 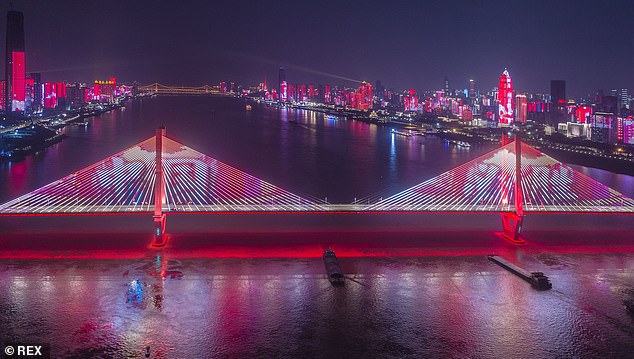 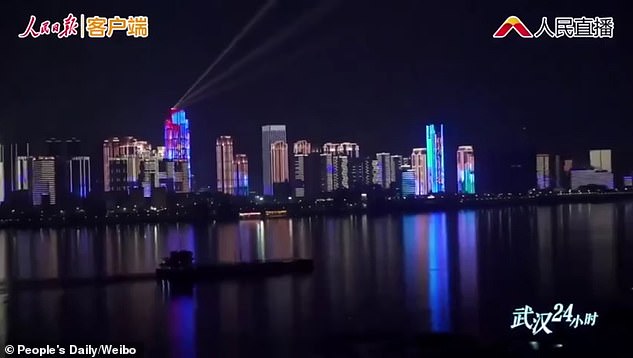 More than 1,000 buildings across the city were lit up, bearing animations of health officers and words such as ‘united’ and ‘build a beautiful future together’.

Names of 34 Chinese provinces were also displayed during the light show to express the city’s gratitude to all the medics who were sent to Wuhan to help combat the outbreak, Chinese media report.

Over 42,600 medical workers from all over the country were sent to Hubei during the outbreak to join the local hospitals on the front line against the deadly disease.

China sealed off the city of Wuhan on January 23, when it became apparent the deadly Covid-19 virus had started there.

But at 00.50am on Wednesday, trains carrying people out of the city began running, and major highways also began opening up as China’s lockdown on Wuhan was lifted.

When the lockdown was lifted the topic quickly began trending on China’s Twitter-like Weibo platform.

‘Wuhan lifts lockdown’ and ‘Welcome back Wuhan’ were posted.

Motorways were also jam-packed as thousands of cars queued at toll stations waiting for officials to open expressways at the stroke of midnight. 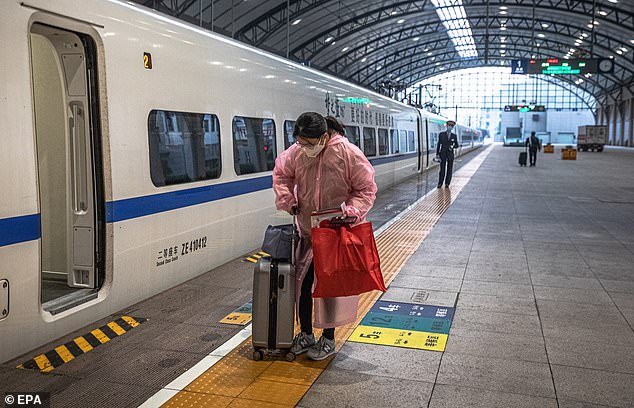 At the height of the virus, Wuhan’s lockdown saw citizens forced into their homes by authorities.

And transport hubs and streets were desolate except for police patrols and emergency workers.

But restrictions in the city have dropped off in recent days as new infections significantly fell.

For the first time since the coronavirus pandemic began, mainland China reported no Covid-19-related deaths on Tuesday.

The total of infections in China stands at 81,865 and the death toll rose to 3,335. Worldwide, more than 1.4million people have contracted the pathogen and at least 85,937 people have died.