Young mother, 21, who initially REFUSED Covid vaccine because she was pregnant and gave birth while in a coma after contracting the virus, finally meets her daughter for the first time one month later

A young mother who gave birth while in a coma after contracting Covid has finally got the chance to meet her newborn daughter nearly one month later.

Saskia Lane, 21, from West Sussex, tested positive for the virus and was admitted to intensive care at Princess Royal Hospital in Haywards Heath after suffering with breathing difficulties.

Saskia, who was eight months pregnant at this time, was sent down for an emergency c-section in early September to help her body recover without being pregnant.

But devastatingly Saskia wasn’t woken up following the birth of her daughter, Betsy Mae Blackman, who is now eight-weeks-old, after doctors decided to keep her in an induced coma to give her the best chance of survival.

Saskia is now urging other pregnant women to have the vaccine after she initially decided to turn it down following conflicting advice. 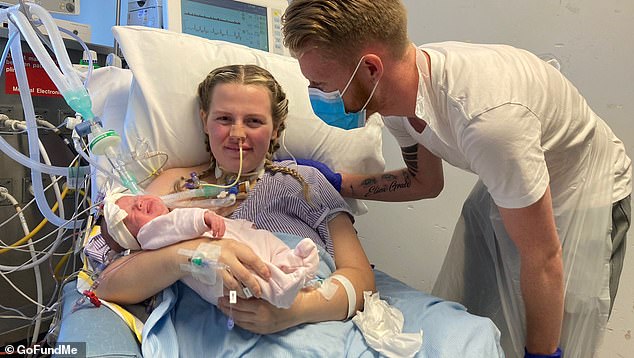 Saskia Lane, 21, from West Sussex, was pregnant when she tested positive for the virus and was admitted to intensive care at Princess Royal Hospital after suffering with breathing difficulties

Saskia’s mother, Becky Knight, 41, explained: ‘Saskia was diagnosed with gestational diabetes whilst pregnant with Betsy and decided not to have the vaccine initially after worrying about the impact it could have on Betsy.

‘I encouraged her to get the vaccine but unfortunately, she had her first jab a few days before contracting Covid so it wasn’t effective.

‘She initially felt worn out and tired but eventually, she began experiencing breathing difficulties and on her third trip to A&E, they admitted her to the intensive care unit.

‘The doctors decided that Betsy should be delivered immediately to help her body have the best possible chance to beating Covid and she was aware of this. 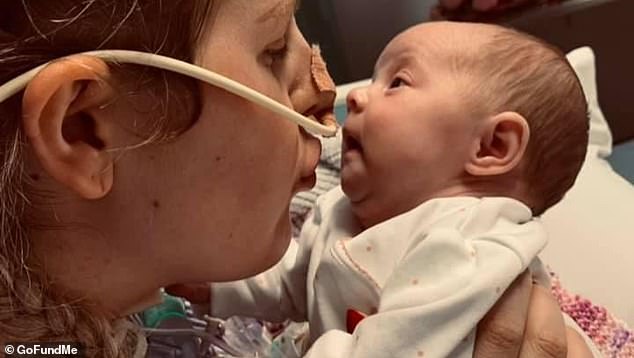 Saskia wasn’t woken up following the birth of her daughter, Betsy Mae Blackman, after doctors decided to keep her in an induced coma to give her the best chance of survival. She met her three weeks later (pictured) 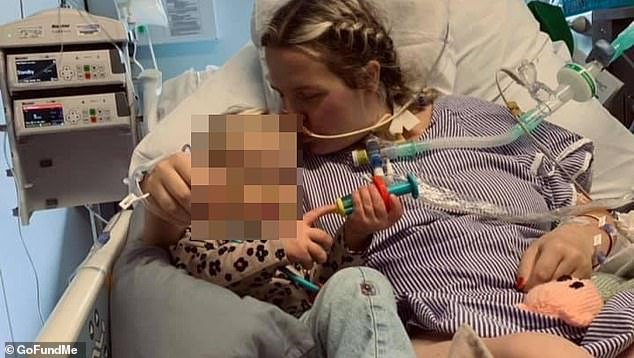 While in St Thomas’ hospital, London, the young mother was placed on life support for two and a half weeks as doctors battled to save her

‘But after putting her to sleep, doctors decided to keep her in an induced coma to allow her body to rest and recover.

‘We were all absolutely devastated – we couldn’t go in and visit her because she had Covid and Lee wasn’t able to meet Betsy until she was a few days old.

‘When she was finally woken up, she was extremely confused and didn’t understand what had happened so I reassured her that Betsy was fine and healthy and we gave her, Lee, and Betsy the chance to meet for the first time privately.’

Since April, pregnant women in the UK have been eligible for the vaccine at the same time as the rest of their age group.

But uptake remains low and health chiefs are concerned about rising admissions for Covid-19 among pregnant women.

Severe illness due to Covid-19 is uncommon in pregnant women, but is more likely in later pregnancy.

All studies so far have suggested mRNA vaccines, such as Pfizer and Moderna, are safe for pregnant women, with no proof behind claims they cause stillbirths or defects.

Pregnant women who do get symptomatic COVID-19 infection are 2 to 3 times more likely to give birth to their baby prematurely.

Saskia was classed as vulnerable during her pregnancy due to her diagnosis of gestational diabetes and was one of the first in her family to be offered the vaccine.

But, Saskia initially turned it down after conflicting advice on the effects it could have on pregnant women.

She gave birth to a completely health Betsy, who weighed 5lb, 8oz. Saskia is also a mother to 23-month old Eliza Grace Blackman.

While in St Thomas’ hospital, London, the young mother was placed on life support for two and a half weeks as doctors battled to save her.

Becky added: ‘Whilst she was in the hospital, she was placed on life support and moved to several different hospitals.

‘The staff at Princess Royal Hospital in Haywards Heath were incredible and the nurses and doctors went above and beyond to look after her and save her life.

‘We as a family are hoping to do a fundraising event at some point next year to give back for saving Saskia’s life.

‘Whilst she was in a coma, we were able to see her only through video calls and it was devastating seeing her in that state.’

Saskia is still in hospital at Guy’s Hospital in London receiving treatment after severe damage to her lungs.

The mother-of-two has been transferred to three different hospitals in an attempt to save her life.

Becky said: ‘Saskia was able to see both Betsy and Eliza on alternate days.

‘She’s been in intensive care for nine weeks now and we can’t wait for her to come home.

‘Her lung has collapsed so it’s only half the size of a normal lung.

‘She also has sepsis in her lung and has had a total of six drains put into her lungs, as well as a tracheotomy which left her unable to speak for three weeks when she woke up.

‘She’s terrified of going home because she doesn’t want to catch Covid again – it’s traumatised her.

‘Saskia wants to encourage everyone to get the vaccine following her experience.’ 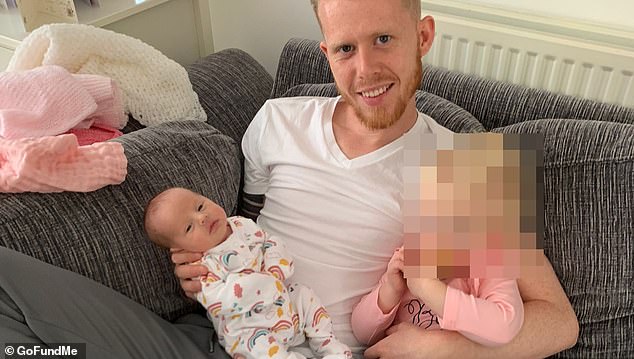 Saskia’ partner Lee Blackman, who works as a panel beater, has had to work part-time following Saskia’s illness and is looking after both Betsy and Eliza (pictured) while she is in hospital

The family are currently fundraising to support Lee and Saskia once she returns home from the hospital.

Lee, who works as a panel beater, has had to work part-time following Saskia’s illness and is looking after both Betsy and Eliza while she is in hospital.

Becky added: ‘There’s no funding if you contract Covid and are seriously ill and have to take time off work.

‘She’s also been diagnosed with postnatal depression so we’re hoping to get her some more funding to cover therapy costs once she’s home.’

Bill Cosby Lashes Out In Court, Calls DA An 'A–hole'