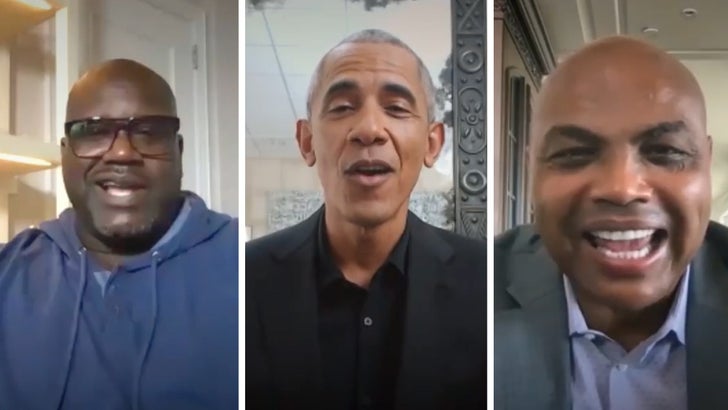 Obama sat down virtually with Charles Barkley and Shaquille O’Neal as part of ATTN:’s “Roll Up Your Sleeves” special on NBC … where the goal was to educate the public about some of the misconceptions about the vaccine.

But, before he got down to business … Obama had a little fun at Shaq and Barkley’s expense!

Obama razzed Chuck for his famous gambling habit and joked with Shaq about how the Big Man endorses every business on the planet!

And then came the fat joke …

Obama congratulated Barkley on his daughter’s recent wedding — and brought up how Charles mentioned how he wanted to slim down for the event.

“You also felt like you need to get in shape because The Hora (the traditional Jewish dance) … when you’re lifting the chair, nobody could do that at your current weight!”

Don’t freak out, it was all in good fun — and Barkley laughed it off.

“I survived the Hora! No one got hurt — it was the best day of my life!”

As for the vaccine … here’s the gist of what Obama had to say.

— “A lot of the underlying conditions, things like diabetes, folks who have preexisting conditions … there is more of that in communities of color than there is generally, which means we’re more vulnerable.”

— “A lot of young people think … ‘Even if I get COVID, it’s like a bad cold.’ But part of what we’re seeing now is there is a different strain of the virus that’s come over. That’s not the dominant variant and its actually hitting young people harder than the original version.”

— “We don’t know the kinds of long terms effects that were having. There’s some folks who get it and 6 months later and they’re still not feeling quite right.”

Obama also brought up how measles used to “kill people all the time” before vaccines.

He also mentioned the Tuskegee experiments and how it has become a reference point for Black people who don’t trust the government when it comes to health care.

“The irony is when you know about the Tuskegee experiment, what’s going on there is the government withheld treatment that was available for Black men for Syphilis. They didn’t give them medicine they needed.”

“So, here’s a situation where if the medicine is available, we need to take it.”

‘Friday the 13th: The Game’ Winds Down Content Updates Amid Legal Battle