Britney Spears took to Instagram on her 41st birthday Friday… to post a loving tribute to her estranged sister Jamie Lynn Spears?! Alongside two pictures of the Zoey 101 alum, one of which showed her playing the guitar, the pop sensation wrote:

“It’s my b-day but you’re my heart so I’m thinking about you … congratulations on being so brave, inspiring, and showing guts and glory in your show !!! You ain’t alone … if anybody knows what that feels like … I get it My baby sister !!! I love you !!!”

Related: Britney Apologizes To Zoey 101 Alum Alexa Nikolas Who Said She Yelled At Her On Set 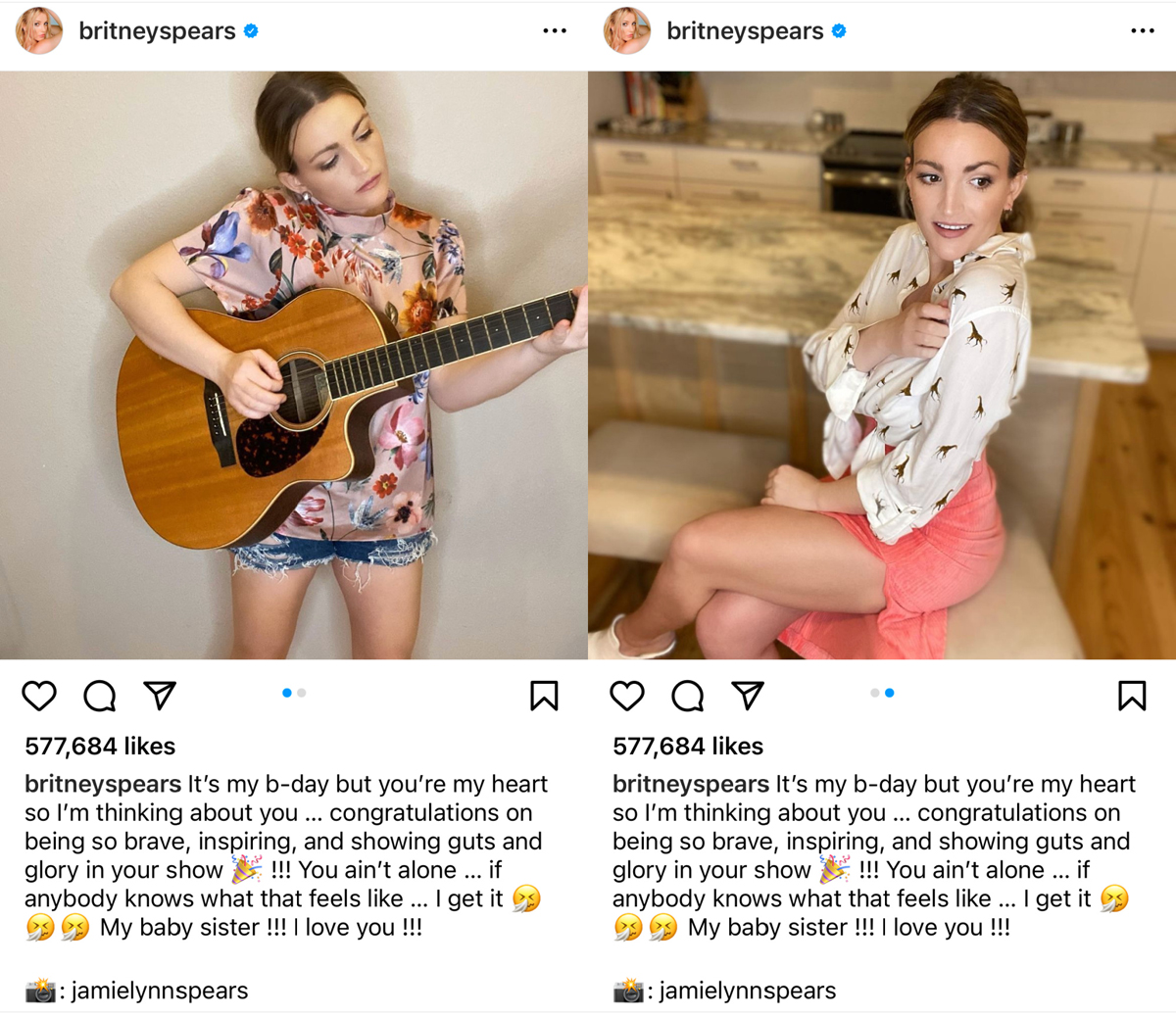 We love to see this!

And if you were curious, the show Brit seems to reference is Special Forces: World’s Toughest Test, a reality series where celebs like Jamie Lynn are challenged to get through military boot camp. Anyways…

The heartfelt message stunned many fans, considering Britney has publicly feuded with the 31-year-old actress and accused her of being complicit in the singer’s conservatorship. As you know, a back-and-forth battle erupted on social media between the Crossroads actress and Jamie Lynn over the publication of her younger sister’s memoir Things I Should Have Said. In January, Britney’s attorney Mathew Rosengart issued a cease and desist to the Nickelodeon star ahead of her book tour, calling the book “ill-timed” with “misleading or outrageous claims.” He wrote:

“Although Britney has not read and does not intend to read your book, she and millions of her fans were shocked to see how you have exploited her for monetary gain. She will not tolerate it, nor should she.”

When Jamie Lynn fired back at the letter, Britney hopped on the ‘gram to call her sibling “scum,” adding that she “should have slapped” her “selfish little brat” sister and mom, Lynne Spears. Yeesh! During the online war of words, Jamie Lynn claimed the accusations on social media “don’t match” what the Oops I Did It Again performer has said behind closed doors:

“Brit, I am always here for you, you know behind the scenes I have always been here. It’s become exhausting when conversations and texts we have in private don’t match what you post on social media.”

It’s been a complicated situation, to say the least, and Britney has continued to snub Jamie Lynn since then. So given their frosty relationship, her followers flooded the comments section to express their disbelief over the post and even voice their suspicions that her account was hacked, saying:

“I must have missed a chapter, my bad.”

“This has to be sarcasm…like wtf is going on?!”

While some were skeptical and confused by the post, others defended the Circus artist, writing:

“Loving a sister doesn’t mean you have them in your life. She’s allowed to miss and love her”

“I don’t think she was hacked, I don’t think she’s still being under ‘control’ , I just think her relationship with her entire family is quite complicated, and we don’t and won’t know everything. Sending love and compassion”

“You can still support and love your siblings/family despite what they have done. This is normal.”

“Y’all there is a chance this was her. Family drama is so complex. You can love someone with your whole heart and still have beef with them or have to separate yourself. Hurt can make you expose some crazy s**t to the world.”

What do you make of this tribute, Perezcious readers? Do you think Britney and Jamie Lynn’s relationship is on the mend? The Sweet Magnolias star hasn’t commented on the post yet, so we’ll have to see what happens next between the sisters! Drop your reactions in the comments below!

‘Can anyone else smell pot?’: Mystery surrounds Sydney cannabis burn

Harry Styles Will Soothe You to Sleep Via the Calm App

Zelensky quotes from Chaplin's 1940 film about Hitler at Cannes