Home and Away star Olivia Deeble's year is just getting better and better.

Departing the soap after three years, Deeble has leapt straight from Summer Bay into the role of Disney princess.

Deeble joined Home and Away in the role of Raffy Morrison in 2016 and fast became one of the show's most popular stars with storylines crossing over with the likes of James Stewart, Pia Miller and Penny McNamee. 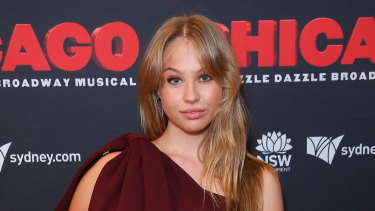 Olivia Deeble is back in Australia after shooting the Secret Society of Second Born Royals for Disney +.Credit:Don Arnold

Despite that, when her contract came to an end, she opted not to renew, and it turned out to be a shrewd move. The 17-year-old's first post-Home and Away role will be in one of the Disney+ marquee new films, The Secret Society of Second Born Royals opposite Andi Mack star Peyton Elizabeth Lee. Deeble will play Princess Roxana in the show which will launch on the platform next year. How Australians will watch it remains a mystery with Disney still maintaining their own secret society around their plans for Disney+ downunder.

While Deeble finished shooting her Home and Away scenes earlier this year, the character's on screen appearance carries on into this month.

How, exactly, her character will exit the show is being kept under wraps, but sources on the set told Emerald City that while Raffy does beat a hasty retreat from the Bay in a few weeks, the writers have written her out in such a way that she could potentially come back some day.

Deeble is back in Australia now, and can add cute new relationship to her list of great things about 2019.

She has just started a new relationship with model Makhosi Mpofu, and the pair have been quietly making appearances at events in Sydney, including the opening night of West Side Story at the Opera House.

Makhosi, who is half-Zimbabwean, half-Australian, is a rising star in the modelling industry. Repped by mega agency IMG under their development arm, Makhosi already has a swag of magazine shoots to his name and a cheeky side hustle making music under the name gUro. If ever there was an IT couple in the making, this is it.

Trevor Ashley revving up for a drag race

The news that an Australian version of RuPaul's Drag Race is to begin production in 2020 was a delight for fans of the franchise which has made international stars of drag artistes like Bianca Del Rio, Violet Chachki and Australia's own Courtney Act.

Now talk has begun about which broadcaster will pick it up from ITV Studios Australia and who will host it.

Many assumed that Act, who was crowned runner-up on the sixth season of the US version of RuPaul's Drag Race, would take up hosting duties for the Aussie version. But another queen has started revving up the engines of the tight knit local drag community.

Trevor Ashley, who has myriad drag personas and has created multiple drag cabaret shows from Liza on an E to Fat Swan to the Shirley Bassey tribute show Diamonds are for Trevor, has emerged as a front runner. 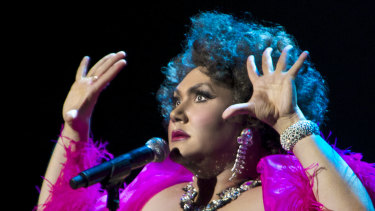 Trevor Ashley is firming up as a favourite to host the Australian version of RuPaul’s drag race.Credit:John McRae

Who ends up hosting the series will be dictated by the network that picks it up, and so far it is looking like a race between Ten, which has form in the drag world with its peculiar Priscilla, Queen of the Desert talent search disaster a few years ago, and Stan, which broadcast the US version and doesn't have any local reality on the platform.

If Stan grabs it Ashley is a hot chance to host, but if it goes to Ten there is no doubt Act will front the show after proving to be a hugely popular contestant on the network's reboot of Dancing with the Stars this year.

Cursed children prepare to pass on the wand

If you have been ruminating over buying tickets to Harry Potter and the Cursed Child in Melbourne and want to see the full set of original cast members, you might want to book your tickets now. Casting has begun to replace some of the show's originating witches and wizards. 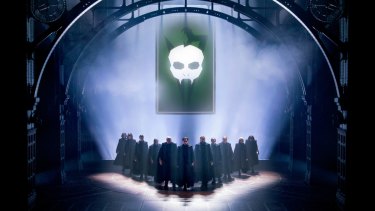 A number of cast members are leaving Harry Potter and the Cursed Child at the end of the year.

Around six cast members will be moving on in the changeover. The show's associate director Des Kennedy has arrived in Australia to finalise the replacements, including for one of the show's most important characters.

Auditions have been held in Sydney and Melbourne and the lucky chosen few will take to the stage from February next year.

Fans of the show (and there's a Wizarding World-sized group of them) will be pleased to know that William McKenna, who plays Scorpius Malfoy and has been the breakout star of the Australian production, has not opted to pack up his wand and go home, just yet.

The Harry Potter recast marks a busy time in the casting office of producer Michael Cassel. The search has just begun for talent for his other extremely valuable production – Hamilton.

Casting notices have gone out, and the casting team, lead by the formidably talented Lauren Wiley, are now in the process of learning the show before filling each of the roles in the multi-award winning production.

The Australian version of the show has committed to casting the lead roles with non-white performers and the brief sent to talent agents specifies which characters must be non-white. The only caucasian principal is King George, a role played by TV star Jonathan Groff in the original Broadway production.

Preliminary auditions are taking place now ahead of the US team including supervising director Patrick Vassel and supervising choreographer Stephanie Klemons holding official auditions from October with call backs in January and February. The full cast isn't expected to be finalised until the middle of next year.

Client Liaison line up for Everest

The Everest horse racing carnival is less than a month away and details of the entertainment that will keep punters amused has been revealed.

It'll be a bit of a preview for fans ahead of the act's national tour later in the year.

Furnace & The Fundementals have also signed on to play; their set will be on the Epsom Day on October 5.