Halle Berry took to Instagram to share a new photo of herself with long hair while revealing the headline-making ‘bob’ haircut she showed off at the 2021 Oscars wasn’t real.

It looks like Halle Berry, 54, tricked everyone when she showed up to the 2021 Academy Awards with a short bob haircut. The actress posted a new Instagram photo that showed her smiling outside in the sun with her usual long wavy locks, proving her short look wasn’t real. “Oscar bob…just kidding 😂,” she cheekily wrote in the caption.

Once she shared the news about her bob, her fans didn’t hesitate to respond with comments. “Ha! Ha! Ha!” one fan wrote while another said she looks “amazing” with both hairstyles. “And you got everyone fool bob 😂😂😂 good for you..,” a third wrote while another wrote, “I figured that it was a wig….but as always U look great!”

Although we now know Halle’s short hair wasn’t real, it impressed people enough to be one of the most talked about hairstyles on the Oscars red carpet this year. She paired it with a long strapless purple gown and looked magnificently splendid while posing for photos, even letting her dress flow out as she flashed a lot of smiles. The hairstyle also included side-swept bangs as she flaunted natural-looking makeup. 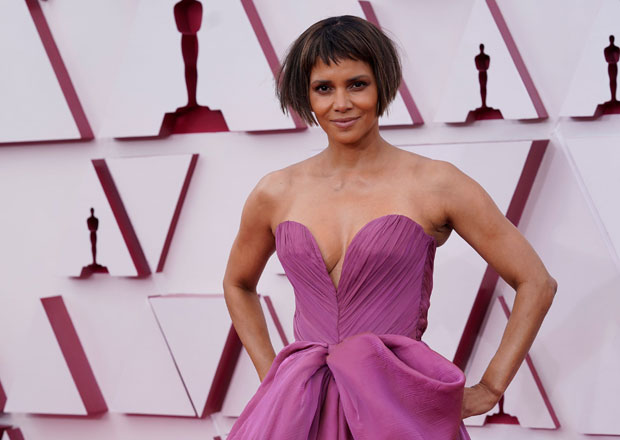 Halle’s Oscar appearance also marked the red carpet debut with her boyfriend Van Hunt, 51. The gorgeous couple looked radiant while posing and smiling for photographers while showing off their love for each other as well. The hunk’s black suit perfectly complimented Halle’s purple dress as she had her hand locked around his arm.

Halle and Van first confirmed their romance in Sept. and have been open about their romance on social media ever since. The beauty always looks smitten with her beau as they flaunt PDA in the eye-catching pics and has gushed over him in captions. “You keep everything simple @vanhunt #valentinesdayweekend,” she wrote when posting a Feb. video of her dancing and snuggling beside the musician while leaning against a railing outside as his song “Being a Girl” played.