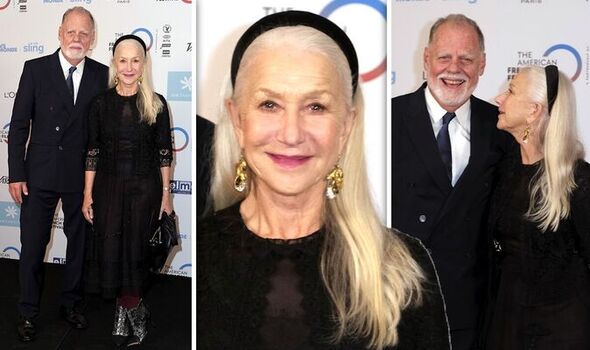 Helen Mirren, 77, looks ageless in a loved-up display with husband Taylor at a film festival

Helen Mirren looked younger than ever as she took to the red carpet in France last night alongside her devoted husband and film director Taylor Hackford.

The British actress looked amazing in a black sheer ensemble, teamed with a black headband over her long white locks and wore a matching lace jacket.

Helen and the film director have been married since 1997, with the pair meeting after her breakthrough role in the 1980s film The Long Good Friday.

Helen Mirren stunned as she looked longingly at her husband

Helen Mirren stunned in the sheer black ensemble, which featured several layers, showing off her sense of style. She sported a mesh dress, cranberry tights and Baroque-style booties selected by stylist Rachel Fanconi.

Helen Mirren was joined by her husband Taylor Hackford

Helen Mirren posed on the red carpet alongside her film director husband Taylor Hackford. Taylor looked very dapper in a two-piece black suit, paired with a white shirt and teal tie. He also wore a pair of smart black shoes to finish off the elegant look.

Helen Mirren looked younger than ever as she posed for the cameras prior to the film festival. The British actress showed off her flawless complexion with her light make-up paired with a plum colour lipstick.

Helen Mirren and Taylor Hackford have been married since 1997

Helen Mirren met film director Taylor Hackford just after her breakthrough part in the 1980’s film The Long Good Friday, and he later auditioned her for the movie White Nights.

Helen Mirren and Taylor Hackford married in 1997 when they were both 41. The actress once shared her secret to a long-lasting relationship, coming from experience having been married to Taylor for over 25 years. She said: “You know, I believe in unconditional praise from one’s loved ones. I don’t want any criticism. And I give him unconditional praise likewise—more or less. We allow each other to do our own thing, and get on with it. A really important part of love is to maintain your own sense of identity. In a way, that’s the most important thing of all, to not subsume yourself into someone else, far from it. Be honestly and authentically who you are,” she revealed to the PEOPLE.

While Helen Mirren keeps busy with her movie roles her husband, Taylor Hackford plans on directing his wife as a femme fatale enforcer called The Spider in his upcoming detective noir thriller Sniff alongside Al Pacino, Morgan Freeman, and Danny DeVito.

How many brothers and sisters does Cristiano Ronaldo have?