WandaVision has taken its magical hex-based superhero madness from decade to decade, and it seems that Episode 7, titled “Breaking the Fourth Wall” and reaching the modern era of sitcoms, could be the last one. The series had already broached shows like The Dick Van Dyke Show and Bewitched before entering technicolor to take on Family Ties and Malcolm in the Middle, and now it seems to be based on shows most of the audience will almost certainly remember watching on TV in relatively recent memory. Primarily, in the case of Episode 7, Modern Family.

Just as he did with Episode 6’s Malcolm In The Middle, Paul Bettany alluded to a Modern Family episode of WandaVision before the show even began airing during an interview with Men’s Health. “I knew a lot of those shows already—Bewitched, and so forth, and Brady Bunch, and Family Ties,” he said. “It’s really, when we started getting into the ‘90s, and Malcolm in the Middle, and Modern Family stuff, I’m less familiar with.”

But, again, if the word of Vision himself isn’t good enough for you, then we’ve got plenty of evidence just below.

WandaVision Episode 7 is mostly based on Modern Family, with a pinch of The Office thrown in.

The primary influence for the sitcom portions of WandaVision episode 7 (titled “Breaking The Fourth Wall”) is Modern Family, the ABC sitcom that ran for 11 seasons and 250 episodes between 2009 and 2011. The WandaVision episode’s setting (inside a house) and aesthetic (bright colors, a “mockumentary” format even though it doesn’t really make much sense) fit entirely with what made Modern Family itself. Both shows are also owned by Disney, but we’ll stick to the actual show characteristics for now.

In fact, the episode’s title card was almost a mirror image of the Modern Family title card. Take a look:

Wanda’s character, as the mother of the family, mostly served as a take on Julie Bowen’s character, Claire Dunphy. In Modern Family, Claire is mother to three children: Haley, Alex, and Luke, and wife to a goofball husband in Phil Dunphy. Wanda, here, has her twins, Tommy and Billy, while her husband, Vision, does frequently act like a goofball. 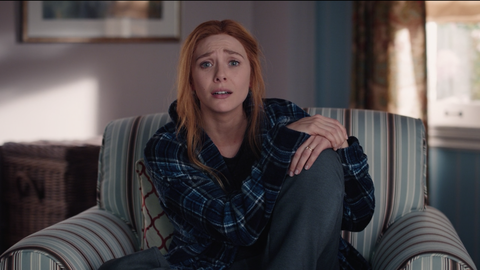 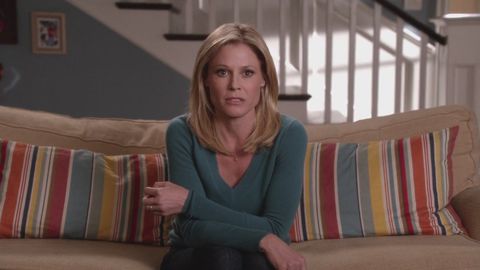 Vision, however, is absent from the home portion of the Modern Family spoof. Instead, he’s out near the newly-formed circus barracks (which Wanda expanded to save his life in the previous episode). Still, he spends time talking to the camera “mockumentary” style, though not in any sort of disguise—he looks entirely like cyborg superhero Vision.

While the format of Episode 7’s sitcom parts are modeled on Modern Family, the episode’s intro sequence and theme music is certainly based on that of the iconic theme song of The Office. The song sounds very similar—both are kinda of keyboard-synthy—and follows similar beats, and the opening sequence focuses on the word “Wanda” in different places, just as The Office‘s opening focuses in the early part on the word “Scranton.”

We can’t say for sure—but Episode 7 and Modern Family might be the last sitcom spoof we get in WandaVision. There are two episodes left, but the show has already basically caught up, as far as sitcom eras go. (Modern Family was on the air until last year)

There’s also the fact that the end of the episode finds Wanda…in some kind of hex? We think? We’ll have to wait and see, obviously. Perhaps more likely would be an Episode 8 perspective shift—an Agatha Harkness “spin-off” episode? Yeah, we’re in for that.

Airbnb Will Cancel All Washington D.C. Reservations During Inauguration Week

Are Amber & Barnett Together After ‘Love Is Blind’? Here’s What We Know