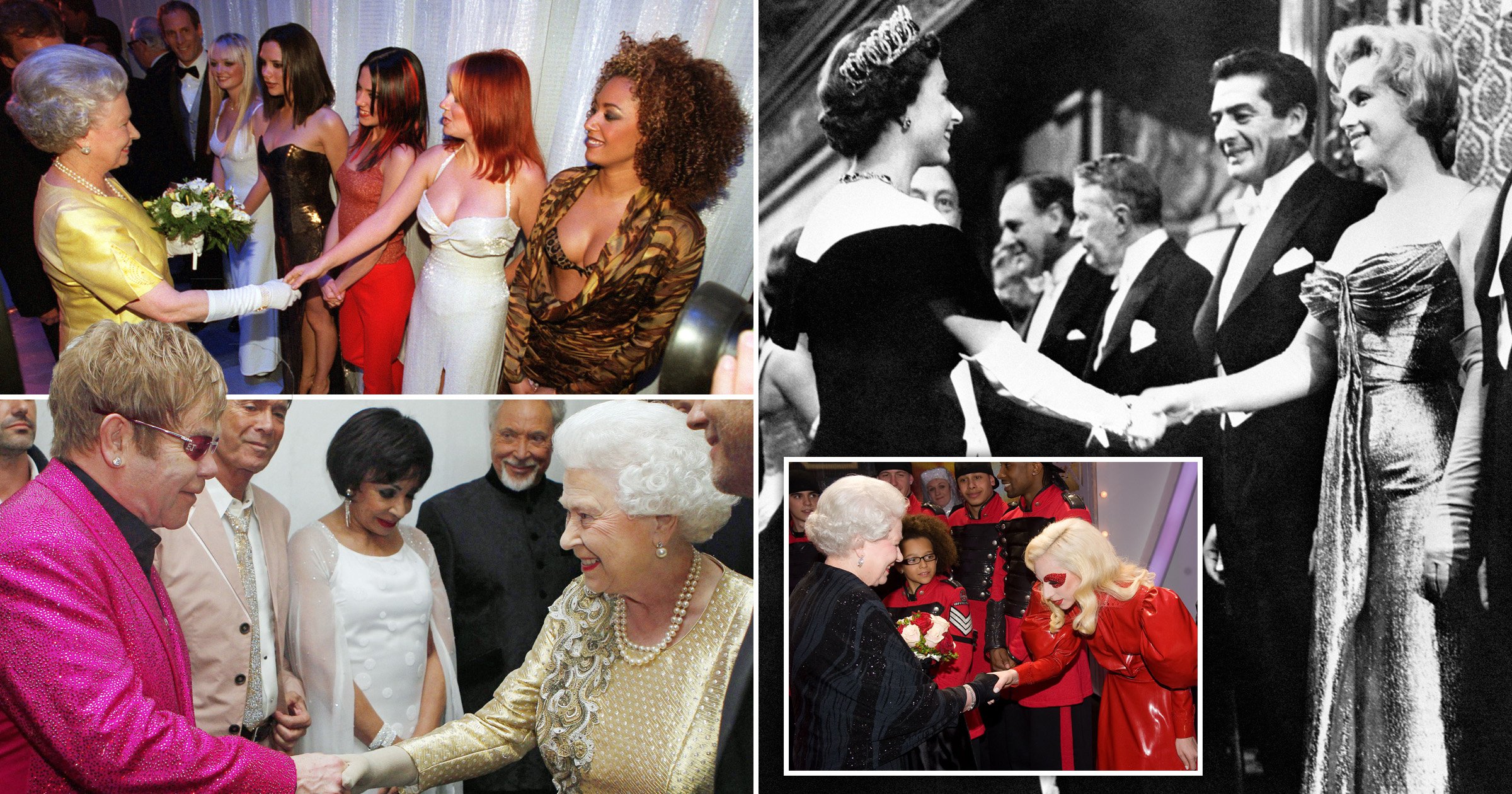 Throughout her 70 years on the throne, the Queen met hundreds of the world’s biggest stars, politicians and fellow royalty during the course of her reign.

From Marilyn Monroe to Lady Gaga, some of the biggest stars of the past seven decades have had the honour of meeting the monarch.

News of Queen Elizabeth II’s death was announced on Thursday evening after Buckingham Palace had released a statement earlier in the day expressing concerns for her health.

Several members of her family, including the now King Charles III, Prince William, Princess Anne and more rushed to Balmoral to be with the Queen in her final hours, with an official statement revealing that she had died in the afternoon.

Buckingham Palace said in a statement: ‘The Queen died peacefully at Balmoral this afternoon.

‘The King and The Queen Consort will remain at Balmoral this evening and will return to London tomorrow.’

Here is a look back at some of the stars who met the Queen:

She died at the age of 96 at her home in Balmoral, with her son, the now King Charles, and daughter Princess Anne by her side.

Marilyn Monroe met with the Queen four years in to the young monarch’s reign and the Hollywood star’s outfit of choice ended up causing headlines the world over.

The actress broke protocol with her choice of dress, arriving in an extremely low-cut gold lamé gown  with spaghetti straps and a tightly fitted bodice.

The Queen was seen smiling at Marilyn as the pair shared a quick chat, reportedly about thwir joint love of Windsor.

The crooner met the Queen at the 1958 premiere of Me and the Colonel in London, where Frank Sinatra was seen shaking her hand and bowing his head.

In the sixties, Raquel Welch was among a series of stars to meet the Queen at a Royal Film performance.

The star was seen standing in the line-up next to writer and director, Woody Allen.

Barbra Streisand met the Queen at a Royal Film Performance of Funny Lady in 1975, wearing a lavender crushed velour cape.

The actress had asked the monarch: ‘Your Majesty, why is it that women have to wear white gloves to meet you and men don’t?’, to which the Queen replied: ‘I’ll have to think about that one. I suppose it’s tradition.’

Elizabeth Taylor and Queen Elizabeth ended up wearing matching colours when they in 1976.

The actress and her sixth husband, John Warner, had been at the gala event at the British Embassy in Washington DC when they shared a meeting with the monarch.

Meryl Streep and the Queen were all smiles as they shook hands when they met in 1980 in London.

The actress had been in London for the premiere of Kramer vs. Kramer, which earned the actress her first Academy Award.

While Sir Paul McCartney met the monarch in 1996 solo, he has previously spoken fondly about meeting the Queen for the first time, when she invited the Beatles to Buckingham Palace.

Speaking to Gayle King for a CBS special to celebrate her recent Platinum Jubilee, he revealed: ‘She looked like a film star to us.

‘You see we were just working-class boys and she’s the Queen, so there’s an ocean or two between us. So I never thought we would [meet her] until we became The Beatles and we got rather famous.’

The Spice Girls have a long and famous history of meeting the Royals (and pinching the then-Prince Charles’s bottom in one infamous incident).

However, the band were far better behaved when they met Her Majesty in 1997, greeting her at the Royal Command Performance at Victoria Palace Theatre in London.

Making for another iconic pop culture photo, the Queen was seen meeting Jennifer Lopez backstage at the Dominion Theatre in London after 2001’s Royal Variety Performance.

David Beckham has met the Queen several times since the nineties, with this famous snap occurring in 2002.

The then-England captain, who was rocking his famous blonde locks, met the Queen during a reception for the Football Association held a Buckingham Palace.

Pierce Brosnan, who was then starring as James Bond, was seen smiling as he met the monarch alongside Bond girl Halle Berry.

The actors were at the premiere for Die Another Day at the Royal Albert Hall when they had their Royal encounter.

Madonna looked like she could barely contain her excitement as she dropped into her best curtsey in front of the monarch.

The Queen and Judi Dench appeared to be sharing an amusing moment together in 2006 when they met at the premiere of another Bond movie, Casino Royale, in 2006.

‘The embodiment of strength and dignity, upholding and performing her vow to The United Kingdom.’

Simon Cowell met the queen in 2007 at the Royal Variety Performance, but admitted the Queen had no idea who he was.

He told Jimmy Kimmel of the encounter: ‘On that night the Queen was there, so I went along and fortunately got to meet her backstage, I mean, it was amazing.’

The Britain’s Got Talent star joked: ‘No, she didn’t talk to me. She had no idea who I was actually.

‘[I was] in awe because you’re told what to say or what not to say more importantly, blah, blah, blah. But it’s like, my God, I’ve actually met the queen. It was amazing.’

Lady Gaga revealed she had her custom latex dress made to resemble a queen-style dress for when she met the monarch in 2009.

The red outfit with matching diamante eye make-up has gone down as one of the most famous snaps of the star.

Helen Mirren, who was awarded an Oscar win for her portrayal Queen Elizabeth II in 2006’s The Queen, was lucky enough to meet the lady herself face to face a few years later.

Following the monarch’s death, the actress paid tribute, writing: ‘I am proud to be an Elizabethan. We mourn a woman, who, with or without the crown, was the epitome of nobility.’

Sir Elton John, pictured meeting the Queen in 2012, shared his ‘profound sadness’ following the news of her death.

He told his followers: ‘She was an inspiring presence to be around and led the country through some of our greatest and darkest moments with grace, decency and a genuine caring warmth.

‘Queen Elizabeth has been a huge part of my life from childhood to this day, and I will miss her dearly.’

While the James Bond actor has met the Queen on several occasions, one of the most memorable was when Her Majesty appeared in a sketch with him.

The pair were involved in a skit to kick off the London 2012 Olympic opening ceremony in which the Queen appeared to take a leaf from 007’s book and ‘parachute’ in to the stadium.

‘She was fun, incredibly game. We had a short space of time and I was a bit grumpy as it was my day off and suddenly I am at the Palace with the Queen at her private chamber.

‘And she improvises a little bit. She was supposed to be sitting at the desk and she asked if she could write, so she pretended to write.’

Angelina Jolie met the Queen in 2014, when she was presented with an honorary damehood.

The actress received the honour in a private ceremony, recognising her humanitarian efforts and services to the UK’s foreign policy.

Following the death of Her Majesty, Joan Collins paid tribute, writing: ‘The Queen was magical.

‘The greatest and most popular star who represented the best of British values.

“I was grateful to be part of her Platinum Jubilee and to see her last appearance on the balcony. I hope she knew how much we all loved her.’

The legendary editor of US Vogue appeared to share a great giggle with the Queen in 2018 at Fashion Week.

During an interview with Tina Brown at the Women in the World conference, Anna revealed the reason for their grins, explaining: ‘She and I discussed how long we’ve both been in our jobs.’

The charming photograph did raise some eyebrows, however, as it was claimed Anna broke protocol by not removing her sunglasses while speaking with the Queen indoors.

Moment a 2,000lb cow charges at cop on a California highway

Doctor Who series 11, episode 7: Did Ryan almost blow up the TARDIS? And 7 more HUGE questions