The Princess of Wales made several comments about how her three children Prince George, Princess Charlotte and Prince Louis have helped her deal with her grief following the death of Queen Elizabeth II.

The latest video, shared by Kristine Johnson on Twitter, shows Princess Kate chatting to royal fans who came out in their thousands to pay their respects to Her Majesty outside Windsor Palace. “They’ve all been extraordinary. I was really sad when I found out and Louis said, ‘Mummy don’t worry, because now Gan Gan is with great-grandpa,'” the mother-of-three said during the walkabout, before pulling an expression and indicating how touched she was by the comment.

The affectionate nickname ‘Gan Gan’ originally came from Kate and William’s eldest son Prince George, who clearly passed on the sweet name for his great-grandmother to his younger siblings.

The Princess was heard praising her children

In her first ever solo TV interview, the Princess pointed out George’s close bond with Her Majesty, admitting: “George is only two-and-a-half and he calls her ‘Gan-Gan.’ She always leaves a little gift or something in their room when we go and stay and that just shows her love for her family.”

Kate also talked about Her Majesty’s quiet support for her. “She’s been very generous in not being forceful at all and in any of her views, but I feel she’s been there, a gentle guidance really for me.”

The Queen passed away “peacefully at Balmoral” at the age of 96 surrounded by her loved ones, just 17 months after the death of her husband Prince Philip in April 2021. 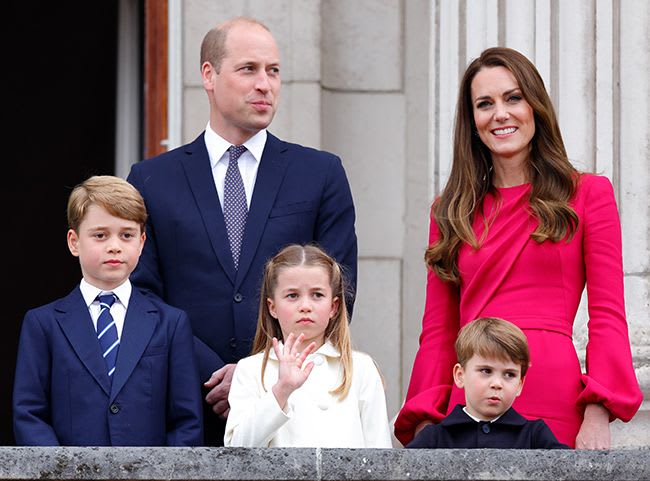 Kate described the young royals as extraordinary during her Windsor appearance

Prince William and Kate reunited with the Duke and Duchess of Sussex for the first time in over two years on Sunday for their joint Windsor appearance. It took place just minutes after the Prince of Wales released an emotional statement in which he paid tribute to his “Grannie”.

Part of the message read: “[I] have lost a grandmother. And while I will grieve her loss, I also feel incredibly grateful. I have had the benefit of The Queen’s wisdom and reassurance into my fifth decade. My wife has had twenty years of her guidance and support. My three children have got to spend holidays with her and create memories that will last their whole lives.

“She was by my side at my happiest moments. And she was by my side during the saddest days of my life. I knew this day would come, but it will be some time before the reality of life without Grannie will truly feel real.”

He added: “My grandmother famously said that grief was the price we pay for love. All of the sadness we will feel in the coming weeks will be testament to the love we felt for our extraordinary Queen. I will honour her memory by supporting my father, The King, in every way I can.”

Make sure you never miss a ROYAL story! Sign up to our newsletter to get all of our celebrity and royal news delivered directly to your inbox.

100+ Vintage and Secondhand Chanel Pieces We're Losing Our Minds Over

Phillip Schofield: Romantic prank to first love who would break his heart revealed

Would Katy Wix ever return to Torchwood?