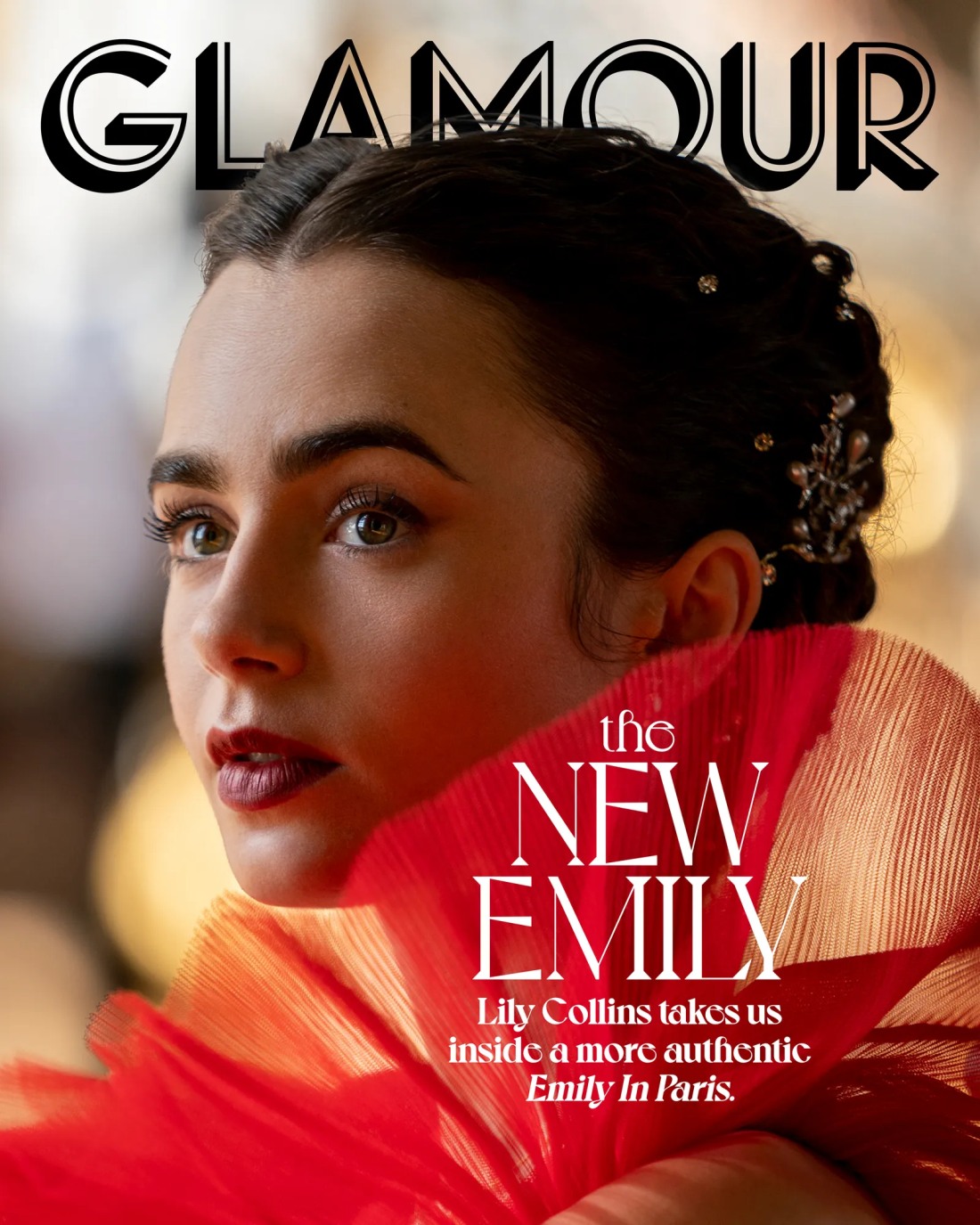 I only sat down and watched the first season of Emily in Paris this fall, after seeing a million negative headlines about it for a year. I didn’t really understand why people had such strong opinions for or against what was a ditzy, frothy little escapist show. Yes, it was too white and yes, there are parts of Emily which are very “ugly American.” But I thought EIP was, like, 85% cute. It was a comfortable, unchallenging little binge-watch. Lily Collins stars as Emily, and she’s a producer on the show. She heard allll of the criticism and she’s tried to use her power as the star/producer to improve it, by hiring diverse talent in front of the camera and behind the camera. The show brought in more writers and the stories will be a bit more realistic. Lily covers the new issue of Glamour and she chats about all of the EIP hate and a lot more:

She made the mistake of saying Emily is probably 22: “I made the silliest mistake [with] that. And I’ve had to pay for that one. I’ve openly admitted, ‘I clearly got that one wrong.’”

On EIP getting Golden Globe nominated while ‘I May Destroy You’ was snubbed: “It was definitely an interesting time for the world when those Golden Globe nominations came out. Honestly, my focus and my concern [at the time] was more on the subject matter at hand and change that needed to be made, as opposed to how I fit into all of that with the show. Yeah, it was definitely a lot.”

It was just supposed to be a cute comedy: “We never represented it as anything other than what it was going to be. And we didn’t know the world would be in the state that it was in when it came out. People said they were laughing and smiling for the first time in a long time, that it reminded them of what fun felt like and that we were able to offer some escapism and romanticism and travel. I was so proud of that. I did not expect it to all of a sudden be something that people were upset [about].”

Lily knows she f–ked up: “And we do poke fun at America too. Emily is just as willing to mention things about where she’s from, and they joke about her as much as things are joked about her coworkers or the way of life there. And so when it was little nitpicky things about deep dish, or that I messed up from the age, I laughed about that. I messed up, I’m so sorry. I know that in this industry, having been in it, having grown up in it, you know that not everyone’s going to love what you do all the time.”

Lily brought in more diverse voices: “I was really passionate about including [more] women, people of color, and also sexual orientation, to really show more of what the world is, and be a part of the Emily family…If there’s ever an opportunity to be better, do better, and have more representation and inclusion, you should run with it. There were certain conversations that we became a part of [such as the Golden Globes]…and while I don’t think I expected to be thrown into it in the way in which we were, I felt like it was definitely an opportunity to be able to do better in season two. It was definitely difficult to go through in a sense, but nowhere near as difficult as what the overall conversation was. And that was what was most important.”

She hopes people keep enjoying it: “I really hope people laugh and smile and get to have the same feelings of escapism and fun that they did the first season. I hope viewers find more of themselves in different characters, and feel seen and represented in the show. And I hope that we get a season three, because I really hope we get to come back and do this again.”

There’s part of me that’s like “wow, I genuinely feel a little bit sorry for her” and another part of me like “lol, that white woman got taught a much-needed lesson.” It can be both! She’s allowed to make her dumb/cute little comedy show and it doesn’t *need* to be perfectly representative of all French or ex-pat experiences. She’s also a white woman with enormous privilege who admitted that she could do better and the show could do better, and she probably wouldn’t have come to that realization without the huge cultural backlash. I respect the fact that she has publicly apologized several times now and that she’s trying to show people the changes she’s made. I hope EIP gets a third season too!

Photos and cover courtesy of Glamour.