Lucy Hale has her hands full while heading to a Hot Pilates session on Monday morning (February 15) in Los Angeles.

The 31-year-old actress brought her cute new pup Ethel with her to class, where she also joined fellow actress Bailee Madison!

“Puppies, pilates, & pigtails w/@baileemadison & @soraconnor ✨,” Lucy captioned a photo from the class on Instagram story. Check it out below.

Bailee reposted the pic, and wrote, “Mad love for them and mornings like this.” 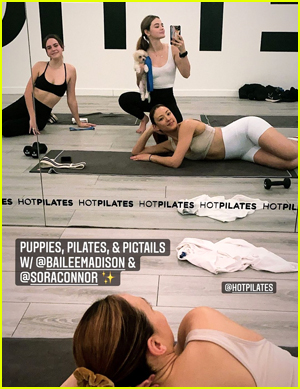 While Lucy and Bailee haven’t worked together, they have both appeared on the same show before. Lucy guest starred in a couple episodes of Wizards of Waverly Place in season one, and Bailee was in quite a few episodes in season four as Maxine Russo, the girl version of Max (Jake T Austin). They’ve even both been on an episode of a CSI show, Lucy on CSI: Miami, Bailee on CSI: NY.

Lastly, they both have a history with Freeform / ABC Family. Lucy of course starred in Pretty Little Liars, while Bailee had a recurring role on The Fosters.

Gwendlyn Brown Thanks “Weed Man” on Christmas. Does She Get High?!?

Apple forced to switch to common mobile charging ports by 2024