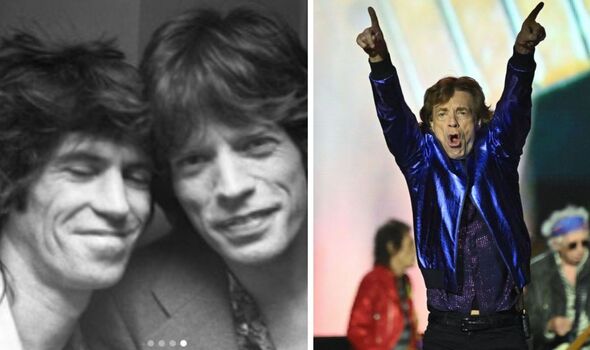 Mick Jagger paid tribute to his decades-long working relationship with his pal Keith Richards with a series of photos highlighting their time together in the Rolling Stones.

Mick Jagger shared a montage of photos of himself and co-star Keith Richards over the years on Instagram today, as he marked his pal’s 79th birthday.

Though Keith once wrote that Mick had a “tiny todger” in his autobiography, Life – an insult that didn’t spare his blushes – it seems that the pair get on famously now.

Though the pair might have slowed down a little now in comparison to their heyday in a touring rock band, Mick took great pleasure in sharing the montage of memories from times past.

“Happy birthday @officialkeef! Love Mick,” he wrote, signing off with a kiss in view of his 2.6 million Instagram followers.

Fans rushed to the comments, including Tania who said: “What a beautiful lifelong friendship you are so lucky.” And Nico added: “I thank the universe every day that you two cross paths on that train station!”

These days, when in the UK, Keith enjoys spending time in his luxurious home in the Sussex village of West Wittering.

Meanwhile, earlier this week, Mick was spotted out on the town in London with his younger brother Chris, attending a concert at the Half Moon Pub in Putney.

Mick Jagger and Keith Richards onstage together back in the day

More than 62,000 followers hit the like button for this snap of the pair placing their arms around each other affectionately onstage.

In his book Life, Keith Richards described a time when their relationship was “unbearable”, and even poked fun at Mick’s manhood after he was rumoured to have had an affair with Keith’s then girlfriend Anita Pallenberg, saying she grew bored of his “tiny todger”.

Mick Jagger admitted in a documentary about the group that he regretted they hadn’t been “communicating well”, while Keith Richards said he felt remorse for making “raw” comments in his book which had caused offence to his pal. Mick then concluded that it was “time to move on” – and they are believed to have rekindled a firm friendship since.

The Rolling Stones marked their 60th touring year in 2022

Just this week, Mick Jagger was spotted watching from the sidelines at the Half Moon Pub in Putney, South-west London, as Slim Chance – a band originally formed by the late Small Faces star Ronnie Lane – took to the stage. His younger brother Chris, also a touring musician, is said to have made a guest appearance in the song How Come.

Hundreds of US troops heading to the border to deal with migrant caravan, official says

Dad who wrote scathing letter to Brearley about race focus: ‘Someone had to’