Having served as Captain Wales in the British Army for 10 years and dedicated much of his humanitarian efforts to the military community, Prince Harry has always taken every opportunity to pay his respects to those who have lost their lives in the line of duty. And while he may now be living in Los Angeles, the Duke of Sussex’s devotion to the veteran community on Remembrance Day continues to be as strong as ever.

Joined by wife Duchess Meghan, Harry paid a quiet visit to the Los Angeles National Cemetery on Remembrance Sunday, November 8, to pay tribute to those who have sacrificed themselves to secure and protect the freedom of others.

In a series of touching images shared by the couple, both Harry and Meghan can be seen wearing commemorative poppies on their lapels as they carefully laid bouquets of flowers that the duchess had picked from their Montecito garden at the resting places of two Commonwealth soldiers—a man who had served in the Royal Australian Air Force and one from the Royal Canadian Artillery. 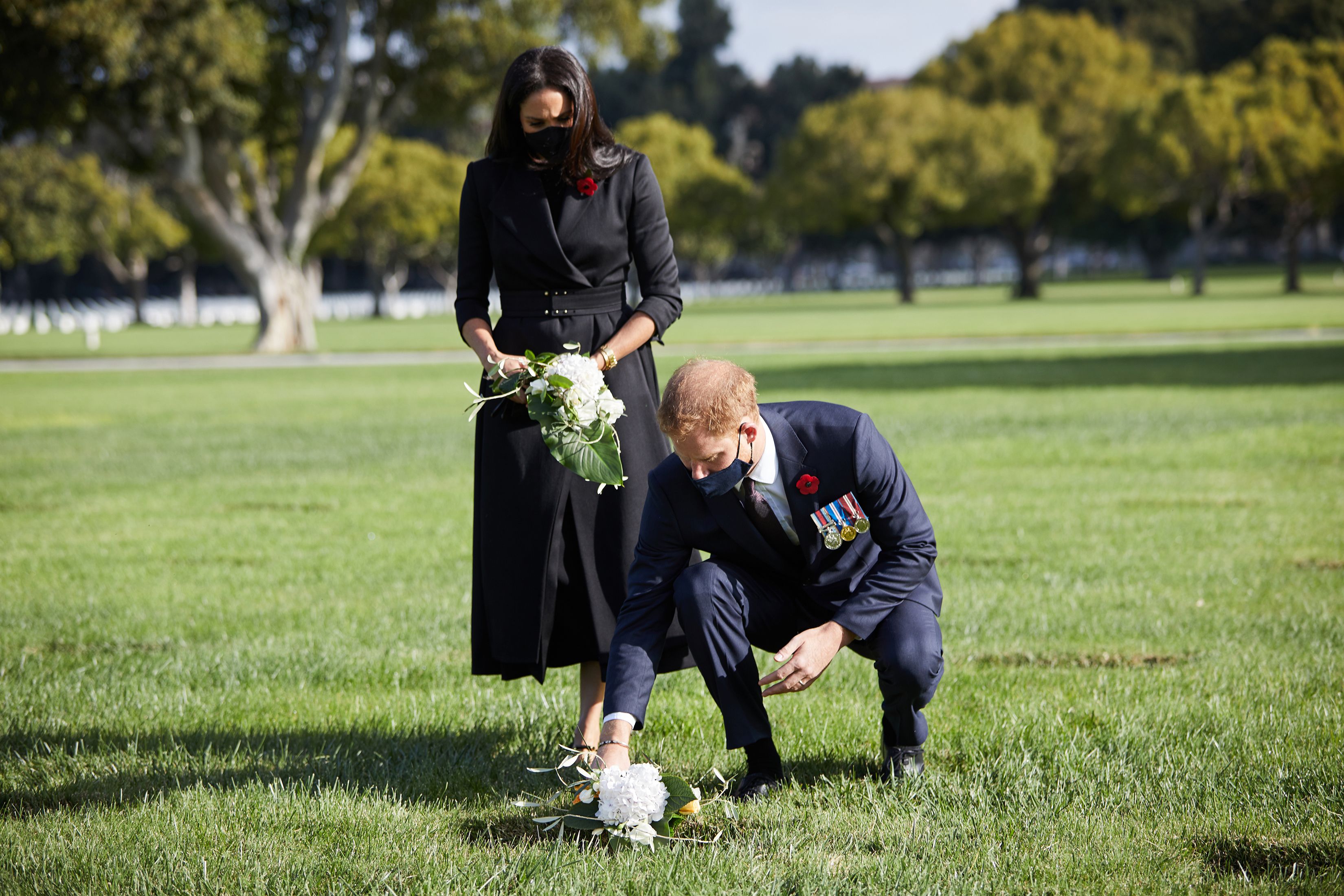 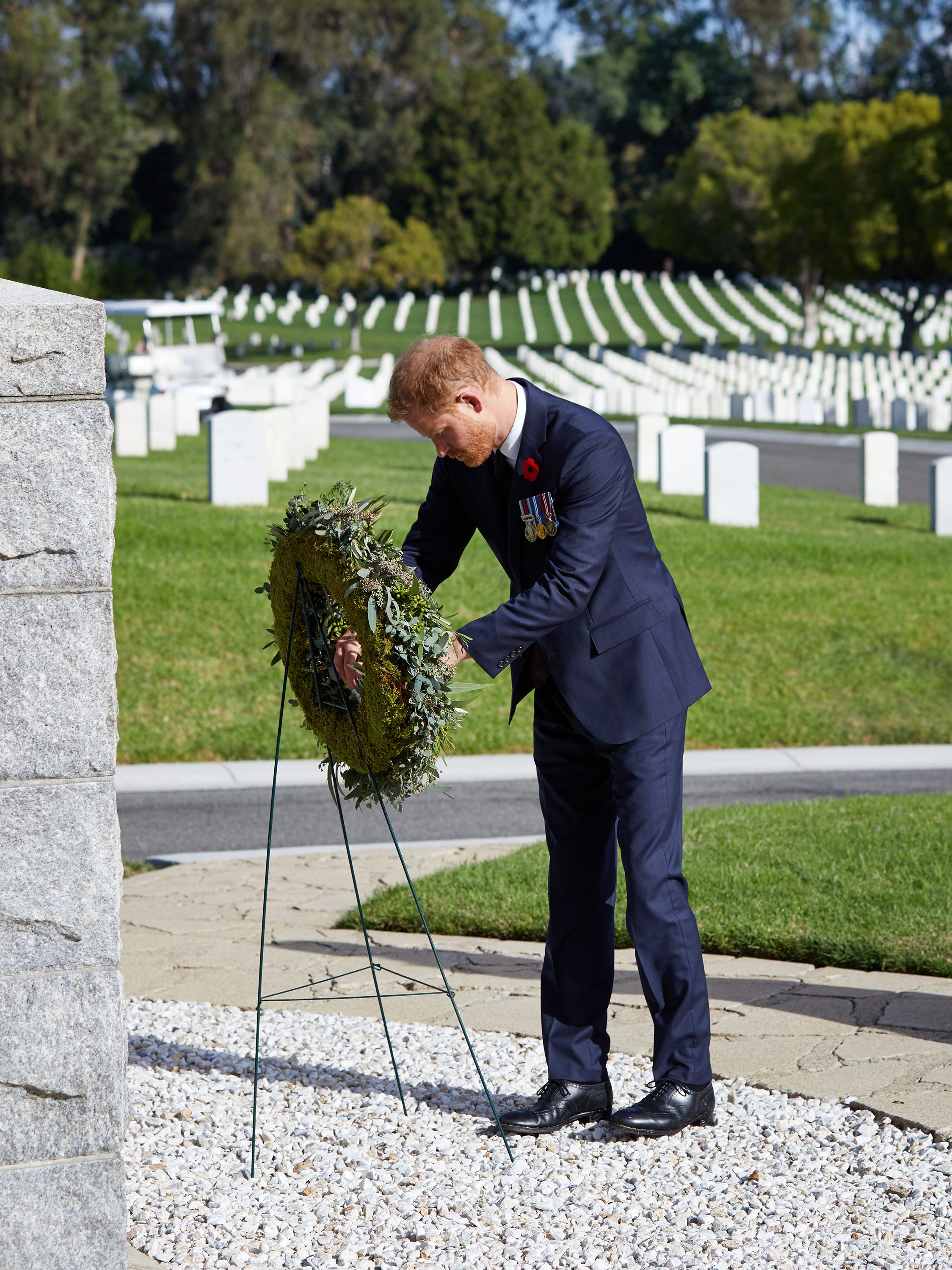 The couple, who only took their masks off when they were alone, also carefully placed a wreath at an obelisk in the cemetery that features a plaque that’s inscribed, “In Memory of the Men Who Offered Their Lives in Defense of Their Country.” Harry—who wore his 2002 Queen’s Golden Jubilee medal, 2008 Afghanistan Operational Service medal, and 2012 Queen’s Diamond Jubilee medal—wrote a message with the wreath that read, “To all of those who have served, and are serving. Thank you.”

A source close to the Sussexes tells BAZAAR, “It was important to the duke and duchess to be able to personally recognise Remembrance in their own way, to pay tribute to those who have served and to those who gave their lives.” Poignantly, the cemetery the couple chose to visit is opposite the Veterans Affairs Greater Los Angeles Health Care System building, which was used by Meghan’s grandfather, Alvin Ragland, after he served in the U.S. Coast Guard. 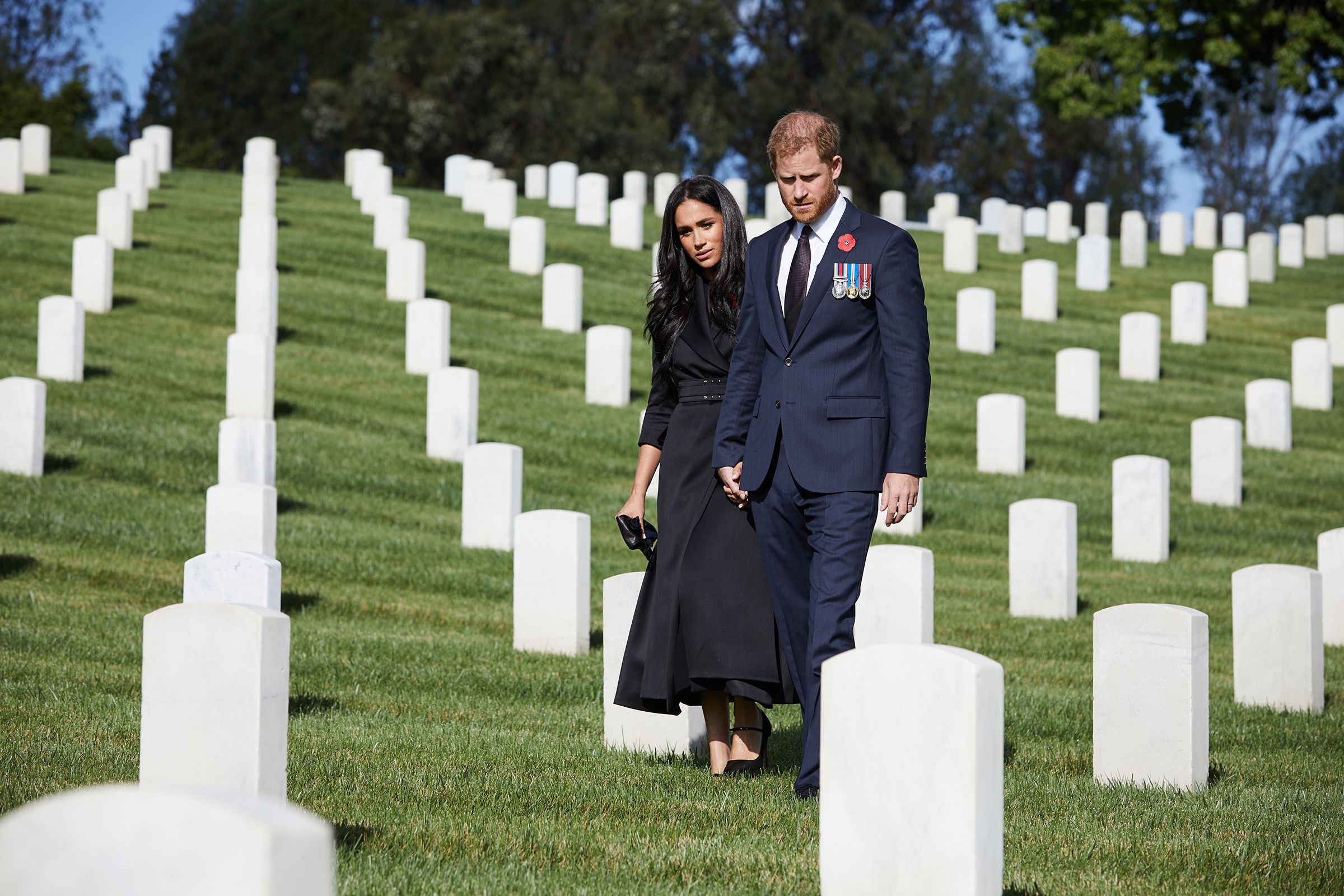 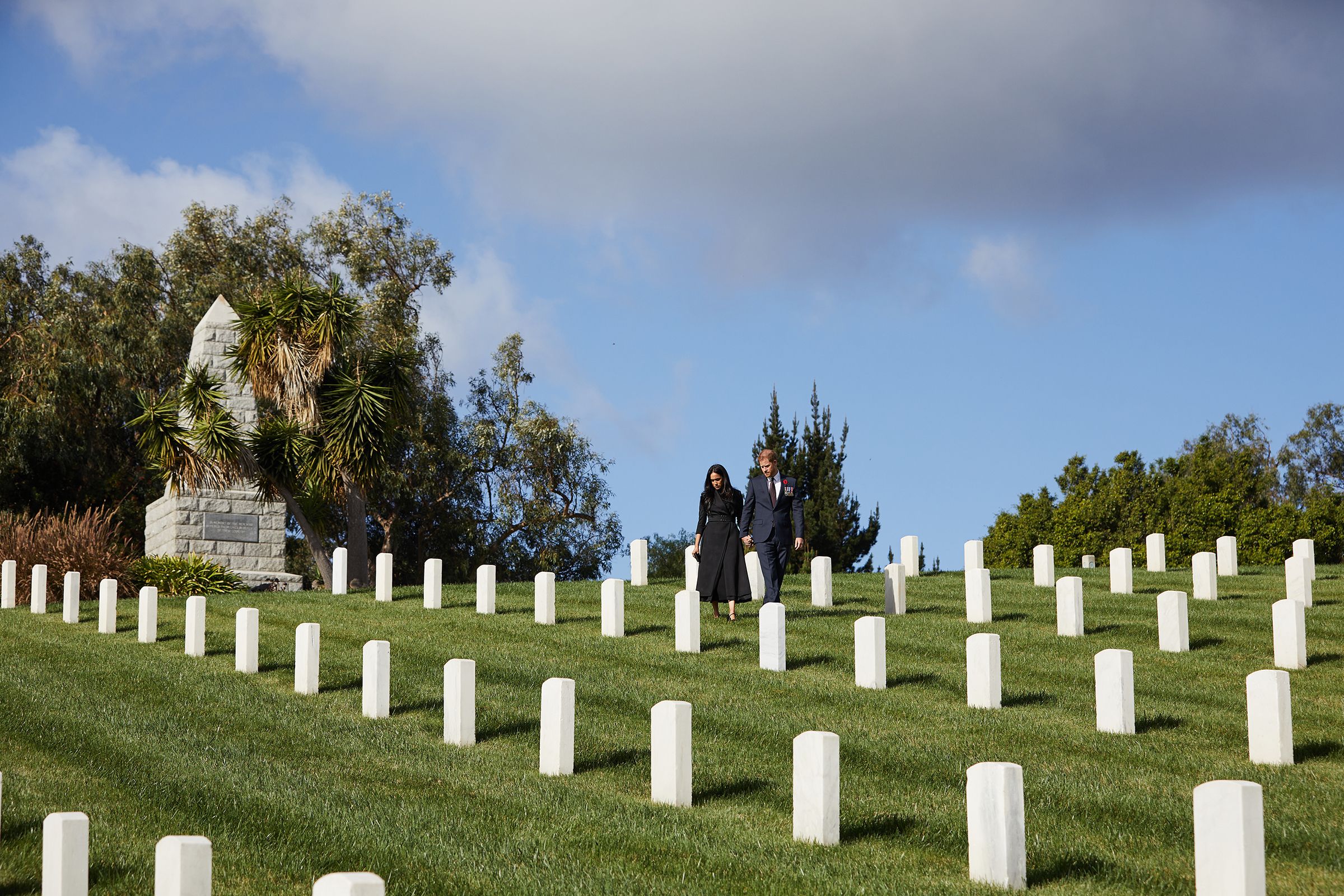 It was reported by the Times of London that Prince Harry had requested a wreath to be laid in his name at London’s Cenotaph war memorial during Sunday’s socially distanced ceremony, which was attended by the queen, Prince Charles, Prince William, and British Prime Minister Boris Johnson, among others. But despite it being the duke’s first year of absence (due to COVID-19 travel restrictions and no longer being a working member of the royal family), a source close to the duke confirms to BAZAAR that his touching plea was rejected. 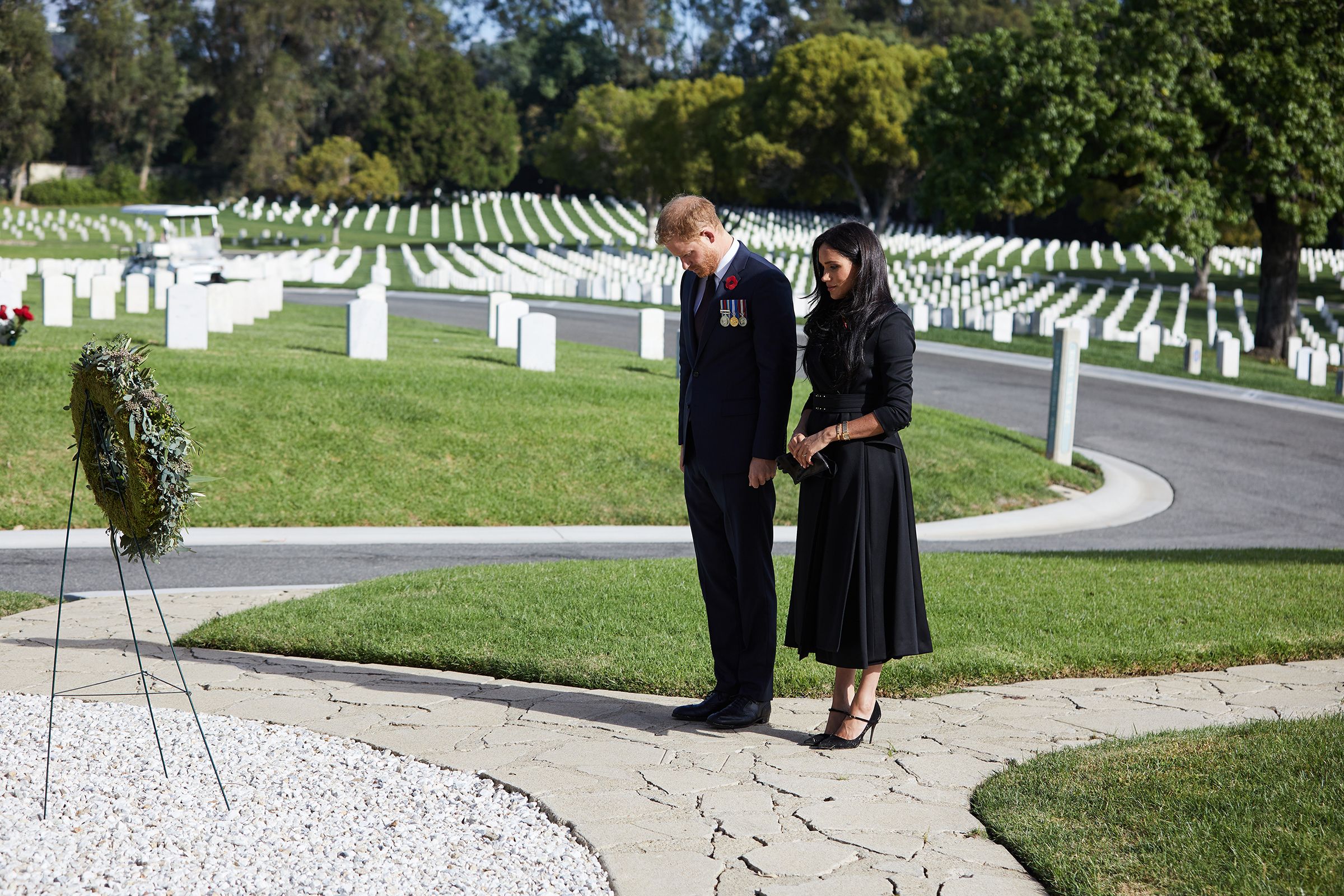 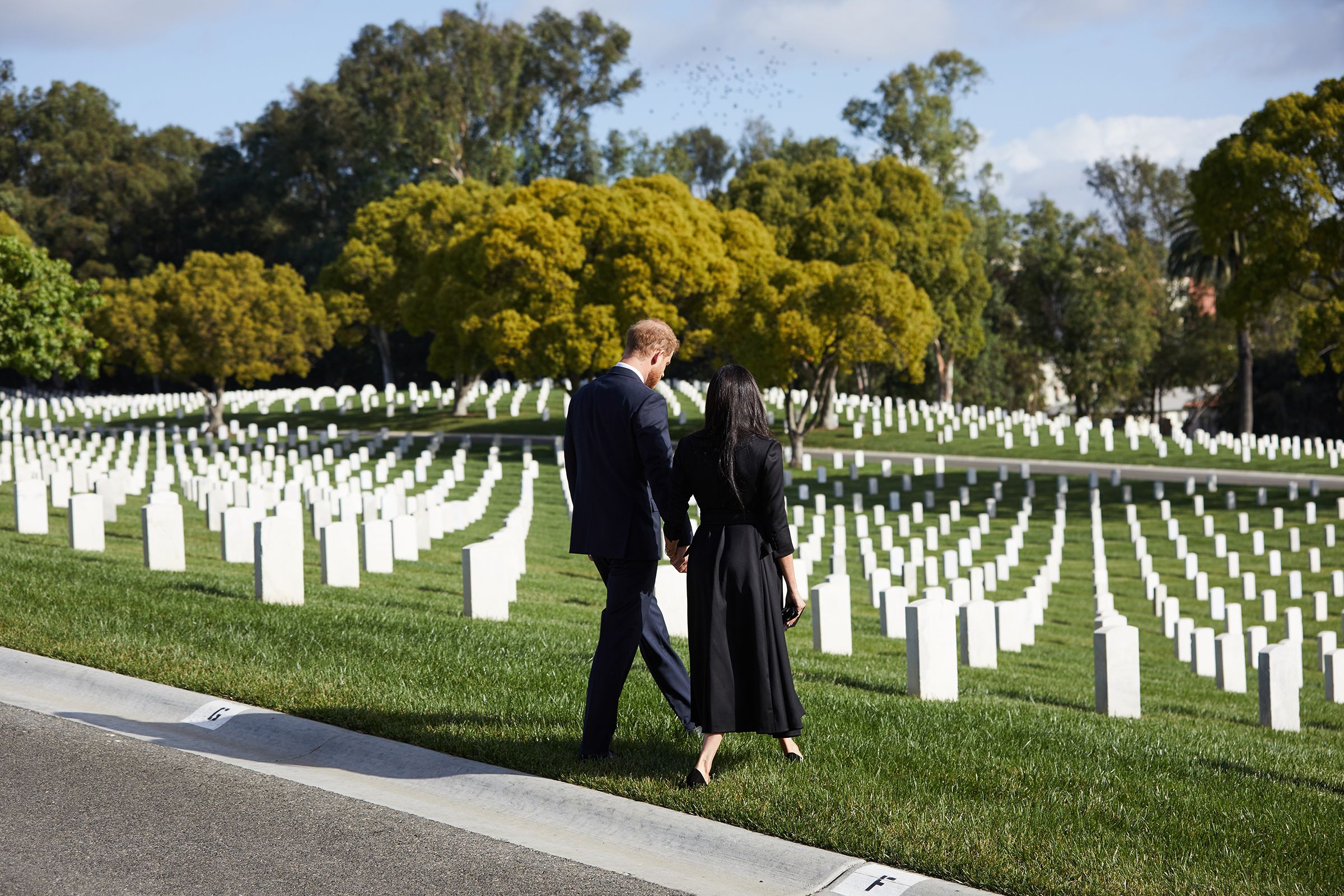 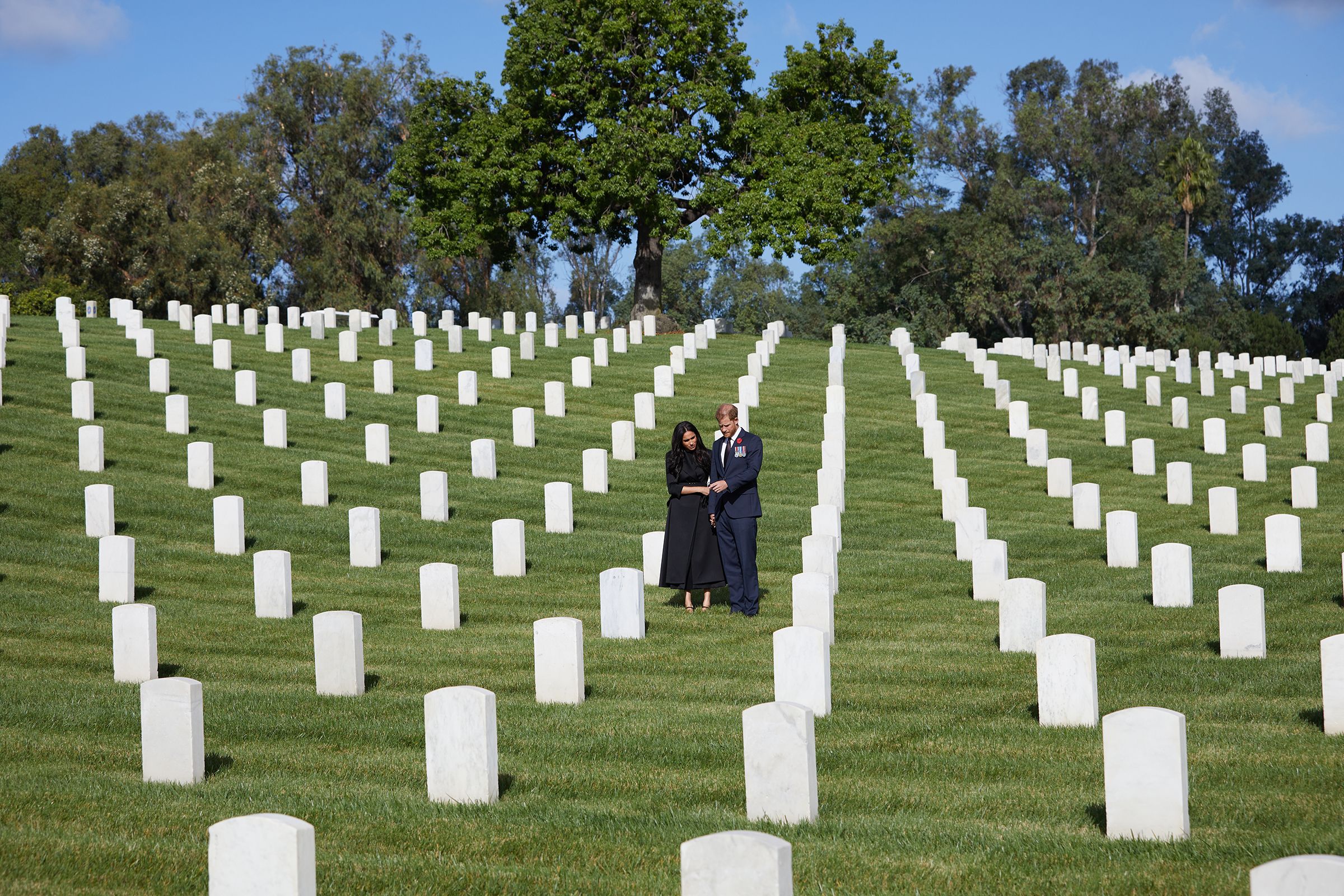 The decision to turn down Harry’s request has infuriated many across the veteran community worldwide. Close friend and former British Special Forces Soldier Dean Stott, who is now based in California, tweeted, “Prince Harry served his country in combat. Since leaving the military he has gone above and beyond for the veteran community and continues to do so. If anyone has earned the right to lay a wreath at the cenotaph, then it is him.”

Royal commentators give their verdict on Sandringham 'Megxit summit'